What do you call a place that always “hits the spot” (as the kids say)? A place where every time you visit, you find yourself saying, “It doesn’t get any better than this”?  A place you’ve visited (like) a hundred times but each visit is better than the last, and the last visit was the best? My name for a place like this is St. George Marsh Ice. 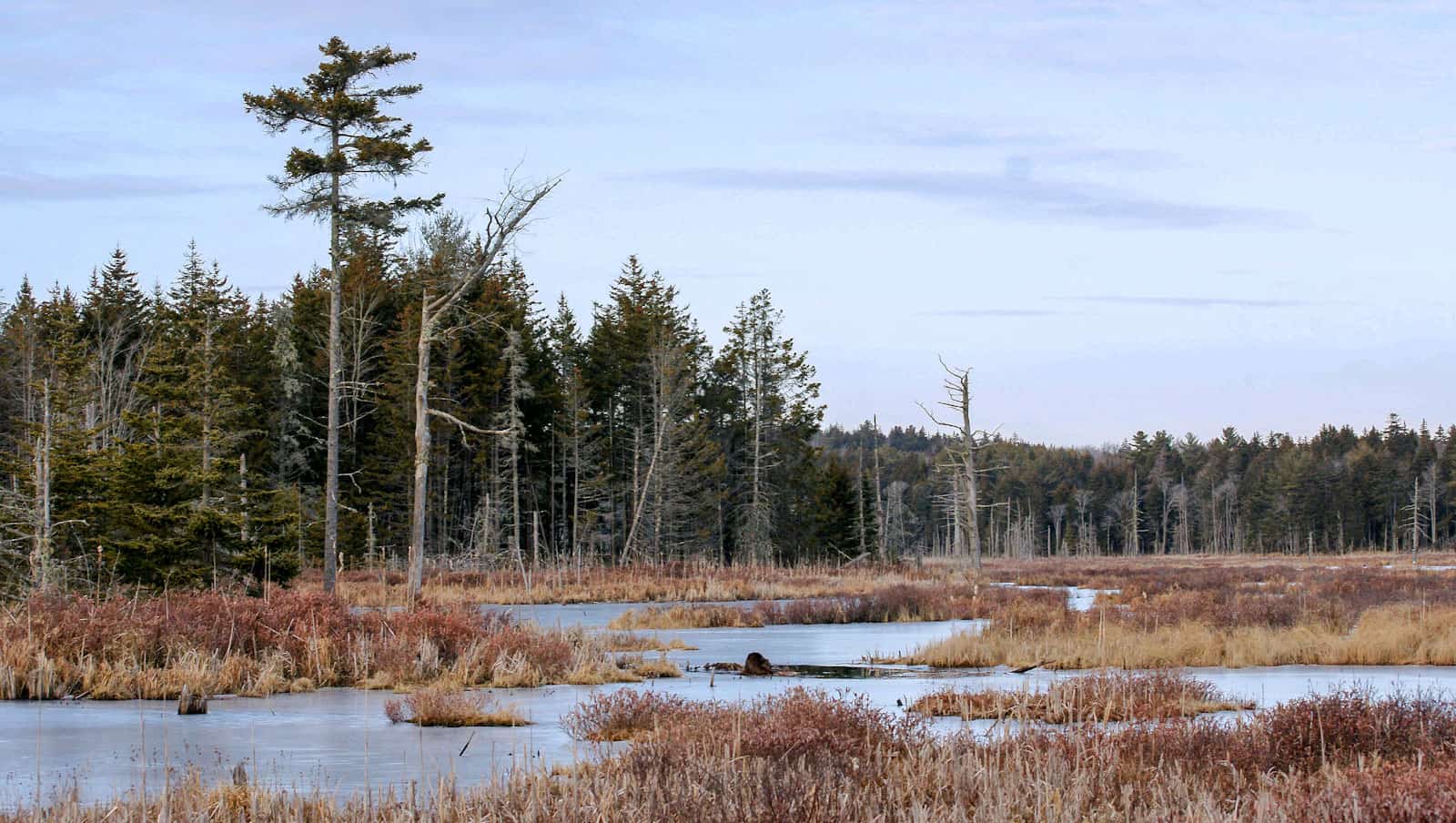 The St. George Marsh is one of Kirk Gentalen’s favorite stomping grounds.

The discussion in my last column focused on the fact that there’s less ice in the marsh this winter and a lower water table in general. (It also focused on ice-fishing spiders.) This is only my fifth winter in St. George, and my third living on the marsh, so I won’t pretend to know long-term historic water level data. But I can say with certainty: this winter there is “less ice” than there has been over the past four winters.

More recently, the temperature dropped, freezing over a new layer of ice to the delight of skaters of all ages. Winter waters went from slushy to slippery-smooth in 24 hours. And, like a good tide, a good freeze can catch critters off guard.

I spy an aquatic insect frozen in ice

On the freshly shellacked ice, Leif, Amy and I came across a frozen insect! Just below the surface was a water boatman (Family Corixidae) frozen mid-oar (is oar a verb?). A non-snow flea insect on the first of February?! It doesn’t get any better than this.

Water boatmen are a big hit at most pond studies, and I have caught (and released!) them many times when exploring with kids in Maine and other locations east of the Rockies. Their hind pairs of legs are elongated and modified into two scoops that resemble paddles or oars. Water boatmen use these to swim, and watching an individual paddle around can be comical, especially to ten-year-olds. The water boatman’s legs are also used to stir up algae, their main food source. They’ve got legs and they know how to use them.

As their name suggests, water boatmen are a mostly aquatic insect (AI). They can and will fly, however, and are often attracted to lights near ponds and lakes where they live. That’s in the spring, summer, and fall when aquatic insects are most active, or at least most easily observed.

As it turns out, many of our favorite AI are still active under the ice in the winter. Did this water boatman find its way to the surface only to have the ice hole it used to climb out of freeze closed? The opening a few feet away hinted that may be a correct guess. One thing I know for sure: I haven’t seen one on the ice ever before.

A shot at survival? 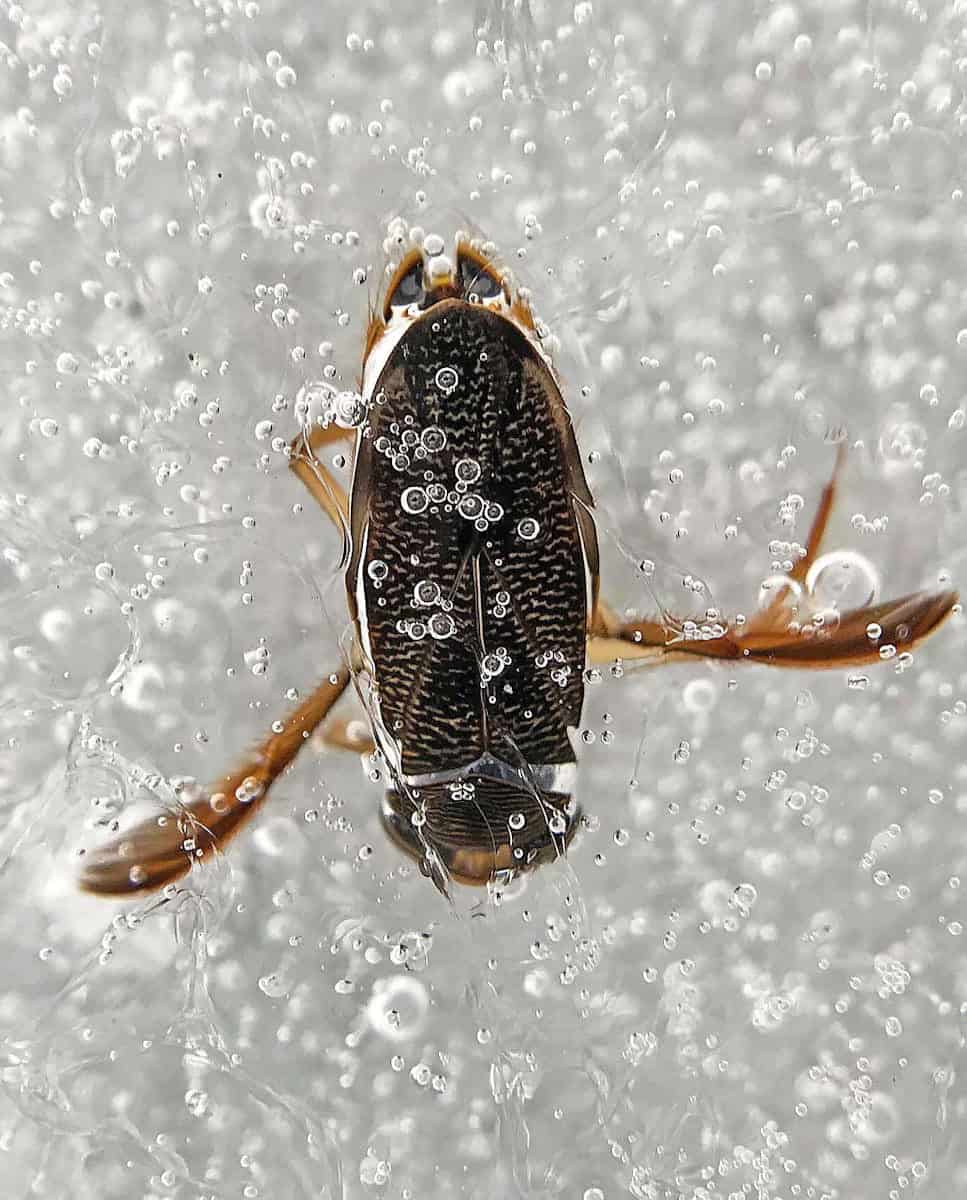 The aquatic insect the water boatmen, frozen in the St. George Marsh.

A quick research session turned up photos of the water-boatmen-in-ice phenomena from Nebraska in 2014! (Just another Maine/Nebraska connection!) Chris Helzer was the observer who wrote about this, and in his post he mentioned that the water boatmen are able to thaw and pick up their lives where they left off after being in the ice.

I had kind of figured the boatman in the marsh was a goner, soon to be crow food. As it turned out, this new information about their thawing potential inspired an afternoon outing after a morning full of sickness. Fresh air is good, right? I had to see if the water boatman was still there after a day’s worth of sun had warmed the ice surface.

On my way to the boatman, I stopped at a river otter latrine and scanned the ice for any evidence of critter activity—trails, tracks or slides–I might have missed. It was then I saw what Leif and I would call a phat, little nugget of a critter hunched by an opening in the ice. It was a mid-afternoon beaver macking on Leatherleaf shrubs (Family Ericaceae). A beaver on ice, how nice! It doesn’t get any better than this.

I spy a beaver on ice

Although beavers are active year-round, this was still the first time I’d seen one above ice in a Maine February. Much of a beaver’s winter activity occurs under the ice, where they feast on cuttings they stashed before the ice formed, or maybe find fresh plant matter below.

This beaver had clearly travelled under the ice to the opening, and was (clearly) taking advantage of the exposed shrubbery meal as it ate a path the width of its hips through the Leather leaf hummock.

While I watched, the beaver worked through a pair of 2.5-foot tall leatherleaf shrubs before it slid into the open water. It then proceeded to swim three laps before stopping to grind away the ice edge with its teeth. The hole was not going to seal up with ice so long as the beaver had a say in the matter. 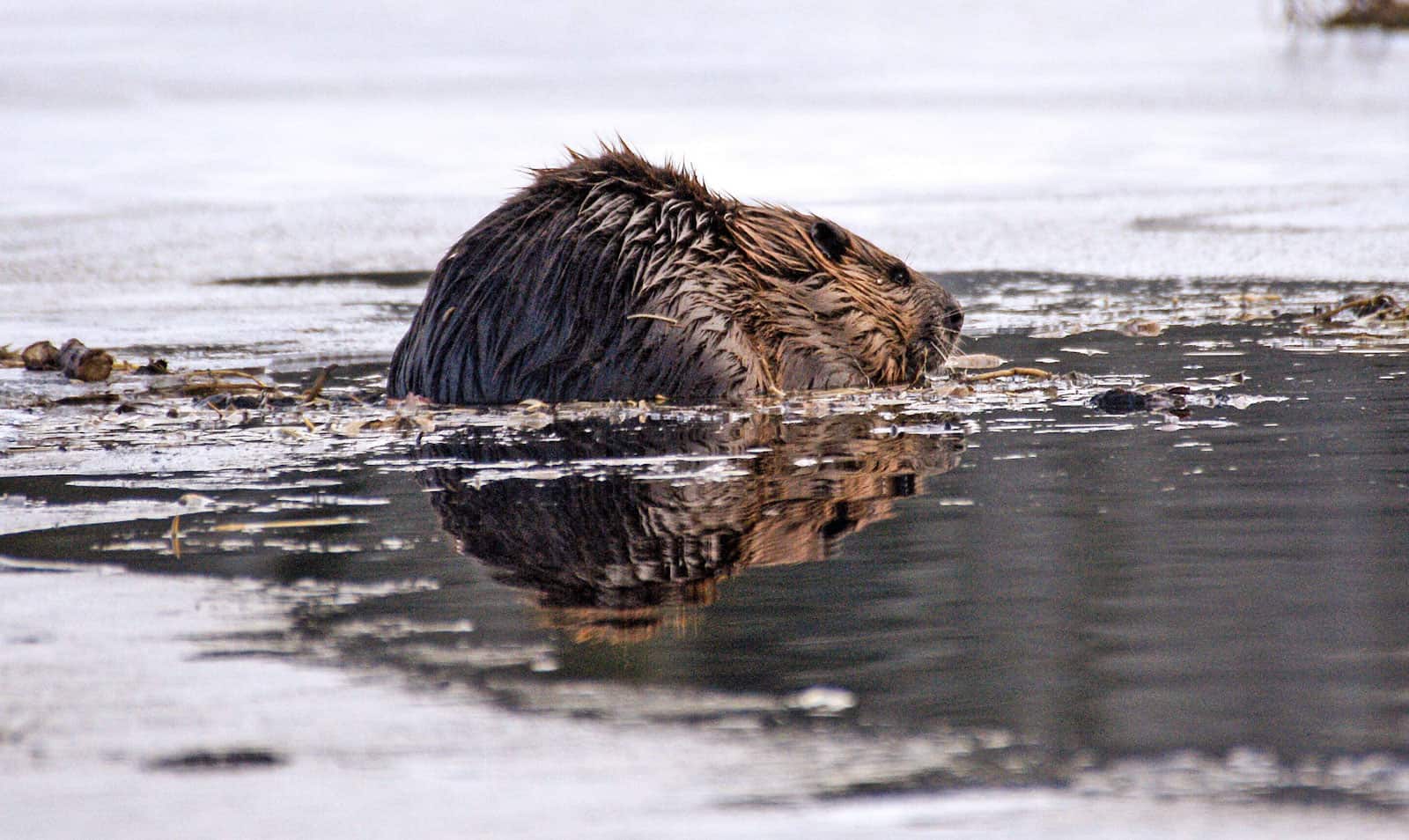 A beaver snacking in the marsh.

My cough was growing steadier (albeit muffled) and the boatman was calling me (not literally), so I left the beaver to its feast of heaths, certain to return to look for signs another day.

When I made it back to the water boatman, I found that warmth from the day’s sun had melted the top layer of ice enough to release captive insects and, alas, it was gone.

The nearest ice hole was still closed, and hadn’t opened that day. If this boatman made it back under the ice it would have had to take to the air and find a new opening, possibly the one the beaver was keeping ice-free. Or maybe it flew in search of an ice hole only to freeze again somewhere else. Or maybe it became crow food after all. Or maybe….

A beaver chewing ice and a water boatman mystery. Just doesn’t get any better than that. Not until next visit that is!