It would be easy to miss, if you weren’t looking for it.

Rising from a mat of Sphagnum moss is a cluster of round, miniscule, bright green leaves. The surface of each leaf is covered in tiny red filaments tipped with a dewy gland. Near the leaf margin, a small fly, ensnared by filaments, suffocates in sticky mucilage. The leaf secretes a protein-digesting enzyme, rendering the insect into a nitrogen-rich slurry, which is then absorbed.

Roundleaf sundew (Drosera rotundifolia) is common on the coast of Maine, but far from eye-catching. Its significance to humans is minor: used in Scandinavia for cheesemaking (enzymes secreted by the leaves can curdle milk), roundleaf sundew also exhibits some antibiotic properties. Like all plants, it interacts with its neighbors, and opportunistic ants sometimes make a meal of ensnared insects. This tiny plant deserves a deeper dive, however, as its nutritional predilections are…unusual. 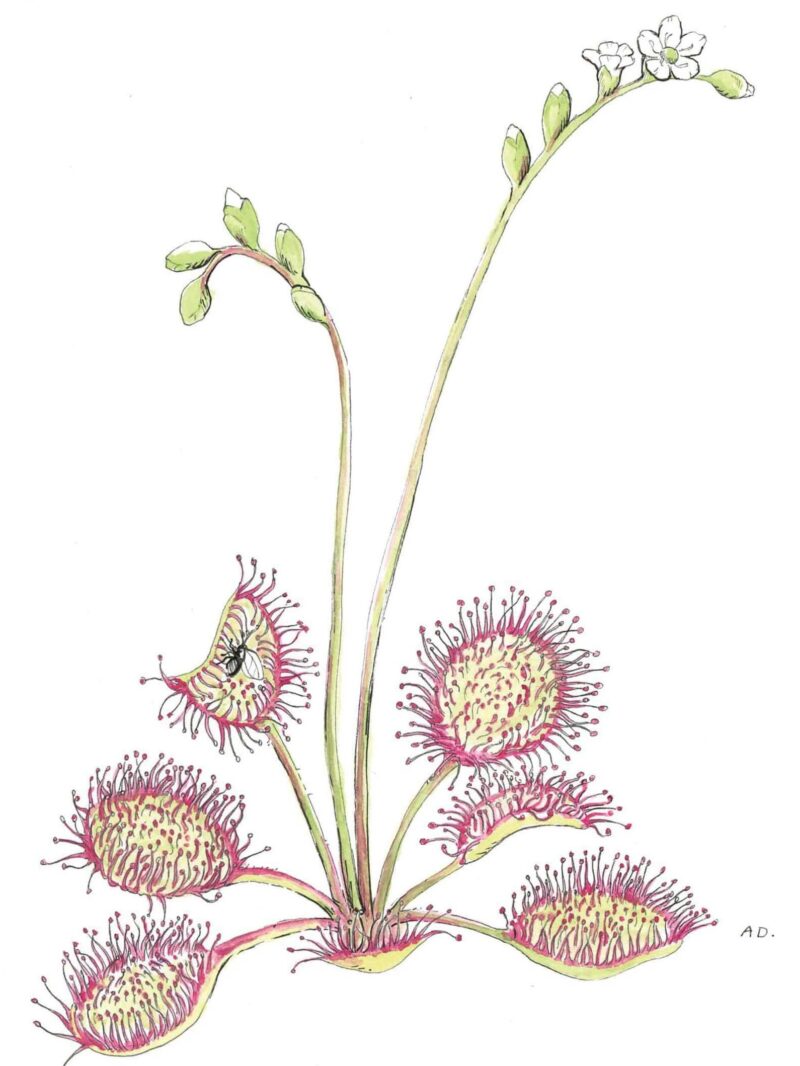 At home in acidic environments and intolerant of any shading, roundleaf sundew enjoys the company of Sphagnum mosses, which acidify their environment and impede the growth of most other plants. The price sundew pays for freedom from competition is lack of nutrients, as bogs aren’t exactly a rich growing medium. Nature usually finds a way, however.

Botanical carnivory is one of those concepts that should probably keep you up at night. The roughly 600 species of carnivorous plants worldwide have no single common ancestor. Instead, the ability to extract nutrients from insects evolved independently at least five times over the span of evolutionary history. Sundews use sticky traps to ensnare their pray; their distant cousins use pitcher traps, hydraulic snap traps, or suctioning bladders.

As for how sundews break down their meals, it’s a matter of chemistry, subverted. If you are a gardener, you know plants and fungi rarely play well together. To defend themselves against fungal infection, many plants produce an enzyme to break down chitin, the polysaccharide that makes up the cell walls of fungi.

Insect exoskeletons are also made of chitin. Necessity, that mother, coaxed the chitin-devouring enzyme into doing double-duty as a digestive agent. Add to this the quandary of segregating reproduction from nutrient acquisition: a carnivorous plant must attract, trap, and consume some insects, and benevolently lure in others to pollinate it. It’s a complicated way to make a living.

Every creature has a story to tell and its own unique way to eke out an existence on Maine’s rocky coast.  Some have just figured out more creative ways to do it.

Amanda Devine is MCHT’s Regional Stewardship Manager for Southern Maine, and the kind of person who drives off the road to look at interesting plants. She holds a master’s degree in botany from the University of Vermont’s Field Naturalist Program and lives in Freeport with her young daughter, Lily, who also likes plants.

MORE VOICES FROM THE COAST