Some of the rains have been significant, and that has significantly impacted the scene and the energy in the woods. And as I mentioned in the previous Nature Bummin’ column, thanks to these weather patterns, this was a mushroom summer to remember!

When we (the royal “we”) find mushrooms on our travels, our minds often go directly to whether it’s edible or poisonous. (How human-centric we are!) Lately I’ve been hearing comments about the colors that mushrooms have been adding to the largely green forest world. The reds of Waxy Caps, the oranges of Chanterelles and Jellies, the blues of Corts, and the everything else that’s out there—mushrooms can fill in the gaps of the forest spectrum.

The yellow of a newly blossoming dye makers polypore

What (I suspect) most people don’t think about is spores. (And if you do think about spores, I hope it’s not because of allergies or anything.) Bottom line: a mushroom’s job is to disperse spores. It’s not there to feed us, kill us, or thrill us. It’s as a spore dispersal unit, and they’re really good at what they do.

Spores are reproductive units that could be compared to eggs in animals or seeds in plants, but are often simpler and single-celled. Light weight and usually wind-driven, spores are carried along in search of the right spot to grow a new fungus. Chances are slim that they’ll find it, so releasing a lot of spores increases their changes. Also, there are many critters and slime molds that feast on fungal spores.

Consider this: whenever you walk outside, be it in the woods or to catch the bus or whatever, you have spores landing on you. At all times you are spore carriers! Maybe not so much in winter, but you get what I mean.) You’re part of the overall fungus team! Do you feel important yet?

There are many strategies for spore dispersal in the fungal world. Puffballs disperse by pressure (you know the smoke bombs), cup mushrooms disperse by forcibly ejecting spores into the wind (so forceful you can hear them!), and stink horns attract flies to a horrible stench before covering them in gooey spores wherever they touch the mushroom. Many mushrooms have gills where spores are produced (store bought Button mushrooms, for instance) and some gravity release spores through pores (Boletes and Polypores). Another such strategy that often goes overlooked (or underappreciated) is spore dispersal via “teeth.” 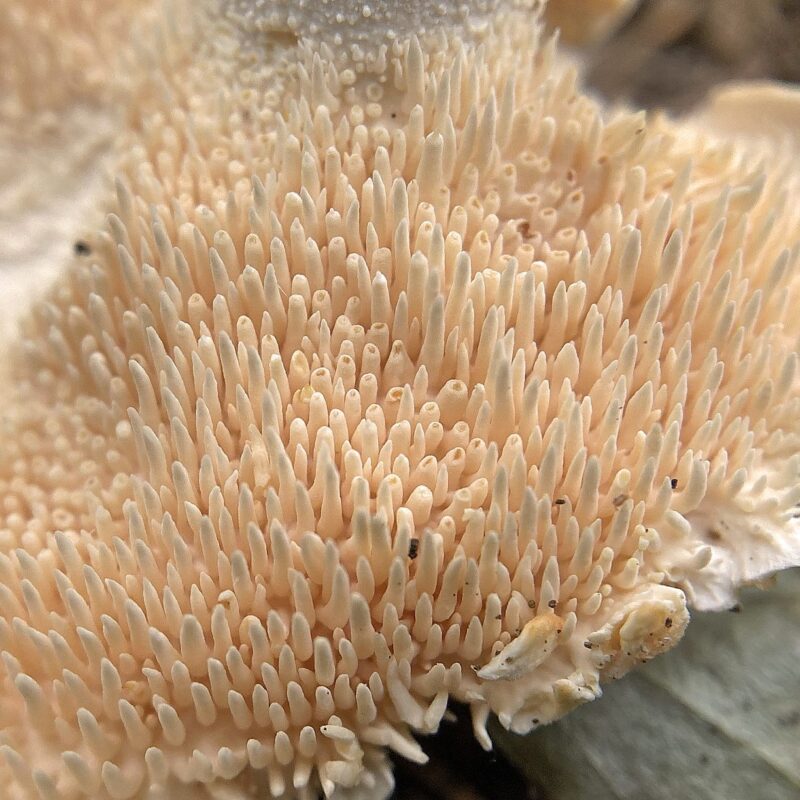 A Hedgehog mushroom, up close and personal

While there are a handful of polypores and at least one Jelly mushroom that use teeth to aid in spore dispersal, finding elongated points hanging down on the underside of a mushroom cap most likely makes your mushroom a member of the family Hydnaceae (Teeth fungi). And “toothed” mushrooms are partaking in the summer of mushrooms 2021, popping up in big numbers, or at least larger numbers than I have seen in my limited 17 years of watching mushrooms in the Midcoast region. Long in the tooth indeed.

For those fungal fans who immediately look to mushrooms as potential food, Sweet Tooth or Hedgehog mushroom (Hydnum repandum) is the Hydnaceae mushroom for you! “Edible and choice!” says David Arora in Mushrooms Demystified. I’ve come across patches on the Huber Preserve on Vinalhaven lately and Hedgehogs never cease to impress with dramatic difference between dorsal and ventral views.

Unassuming and somewhat funkified on top, Hedgehogs aren’t necessarily the most inviting mushroom to take a closer look at.  The cap is often tweaked and misshapen, giving an observer the impression that the mushroom grew under branches or roots or was attacked by slugs. A closer look at the mushroom’s undercarriage reveals a coral landscape world of spines. Take a look at the photo—what a world of stalactites (or stalagmites depending on how you look at it)! These are not present for our visual enjoyment, but rather to increase the spore producing surface area for optimal spore production and release. Man, ain’t that pretty (judgment).

Where sweet tooth is what I would call a mushroom that looks like a mushroom, many of the Hydnaceae that have popped up this summer look similar to stalked polypores rather than traditional mushrooms. One species that stands out is Bleeding Tooth or Strawberries and Cream (Hydnellum peckii), with its “bright red droplets that cling to the surface of the cap in moist weather … [making] this a striking and easily-identified mushroom” (David Arora, author of Mushrooms Demystified, once again). There is nothing like finding a Bleeding Tooth as you walk a trail, but this August Bleeding Tooth was especially prevalent along Vinalhaven trails!

In an effort to be completely honest (how refreshing is that) I’ll say this: before this year I probably crossed paths with maybe a dozen Strawberries & Cream mushrooms and this summer I’ve seen double that, at least. Their beads of red juice shine like jewels and rubies, but are way too delicate to touch. I took photos but couldn’t find it in me to pick any to inspect the teeth structures. If I am not picking for personal/familial consumption, I am leaving for others to see. Bleeding Tooth is a different mushroom altogether without the beautiful (judgment) beads of red, so I refrain from touching if I can help it. Does that make me human? Makes me me I think.

In summary: a mushroom’s job is to disperse spores, pure and simple. Whatever humans experience from their fungal encounter—be it tasty food, aesthetics, or spiritual gains—is a bi-catch compared to a mushroom’s main goal. And that includes an appreciation of the form and function of Teeth Mushrooms, and respect for the colored water beads that bedazzle a rather plain looking (judgment, and a bad one at that) mushroom into something untouchable.

These are important bi-catches, ones that may bring an observer increased appreciation and awareness. So thanks, Hydnaceae, for a good summer. Looking forward to what you have to pop up next!