River otter track and trail mark
Stories from the Coast >

Learning with Kids – On Ice!

A fair amount of my “adult” life has been spent exploring natural habitats with kids. For roughly 14 years, my weekdays were filled exclusively with conversations and laughter that only can be had while spending time outdoors with fifth and sixth graders.

My weekends, well, they were for quieter observation, looking stuff up, and recharging for the next week. I have fond memories of the cool places and good times I experienced back then. It was time well spent and man, there were a lot of laughs.

For all these reasons, I didn’t hesitate when Alison England, the St. George Middle School science teacher, asked if I would take the sixth graders animal tracking on the marsh ice. Take kids to my current favorite place in the world that also happens to be right out my backdoor? Twist my arm…

Preparing 5th and 6th graders for a marsh ice adventure

To prepare for the outing, I visited their classroom and showed slides of animals and sign that we might expect to find on our field trip. (A lot of tracks and scat photos, in other words; it is what it is.)

Not surprisingly, with this winter being what it is, there turned out to be no snow on the marsh for fresh tracking on field trip day. The students did, however, find historic tracks and trails captured in the ice, which were fun to follow (even if they were mostly made by local, domesticated dogs). Just getting on the ice and looking is an experience!

We also checked out four wood duck boxes, watched a Red-shouldered Hawk being chased by crows, and heard a Barred Owl during a ten-minute quiet activity. Man, there is always something going on in the marsh!

With the field trip date landing near the end of ice walking season, we had to beware of ice thickness, and adjusted our route for safety’s sake. For this reason, we searched areas I hadn’t visited this winter, and I was psyched about it! We had hardly gone up marsh when we found what I consider to be the find of the season–a chunk of a snapping turtle’s shell! On the ice, or partially melted/frozen into the ice, no less! 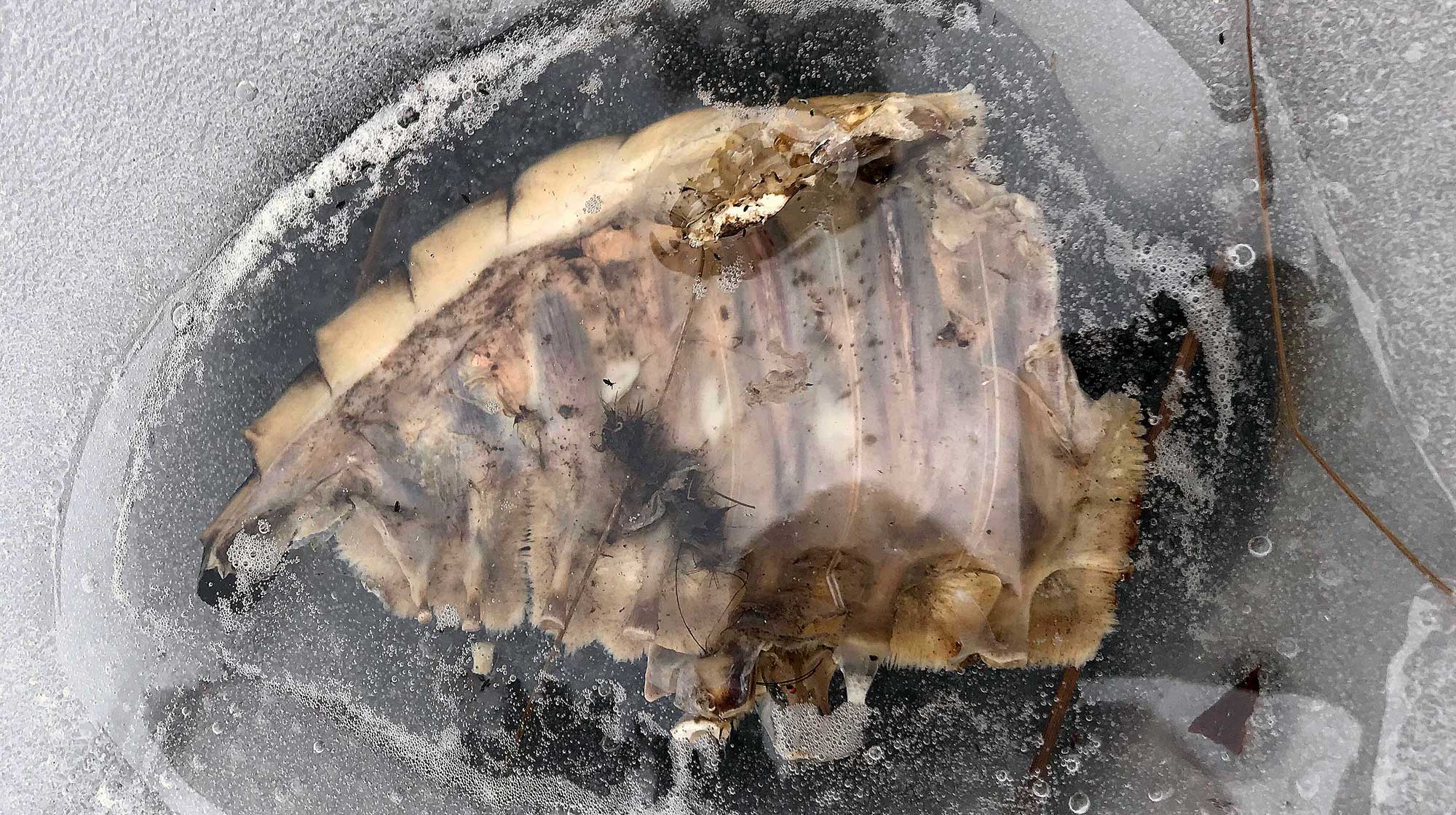 A quick scan of the area turned up more turtle pieces, all picked clean of meat and tastiness. This was the second time I had found snapping turtle remains on ice in winter, but the first I had seen in the marsh or Maine. 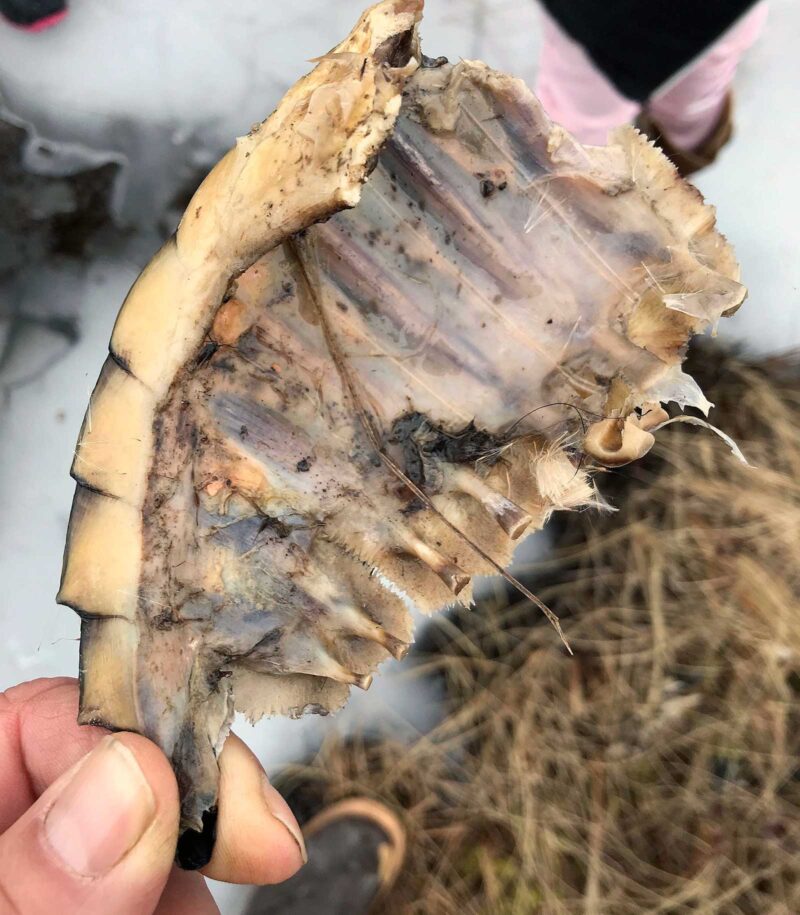 While this particular snapper wasn’t full-grown (and never will be), it was big enough so most predators would leave it alone. As a species, snapping turtles have few predators in Maine to worry about after their first year, when they are super tiny.

The exception to this rule is in winter of course. While turtles don’t truly hibernate (sleep away all the days of winter), as a cold-blooded reptile they slow down their lifestyle considerably, resting in mud and muck under the ice for much of the season. Here they breathe with “cloacal respiration” (that is a story for another time).

From the information I gleaned, river otters are pretty much the only predator that regularly finds, dislodges, and then feasts upon snappers hiding under the ice. Other animals, and the local dogs, probably helped clean the shell of any nutritional scraps the otter left behind. But it was otters—maybe Larry, Curly, or Moe?—who brought this to the surface, so to speak, and set the table for a scavenging feast. 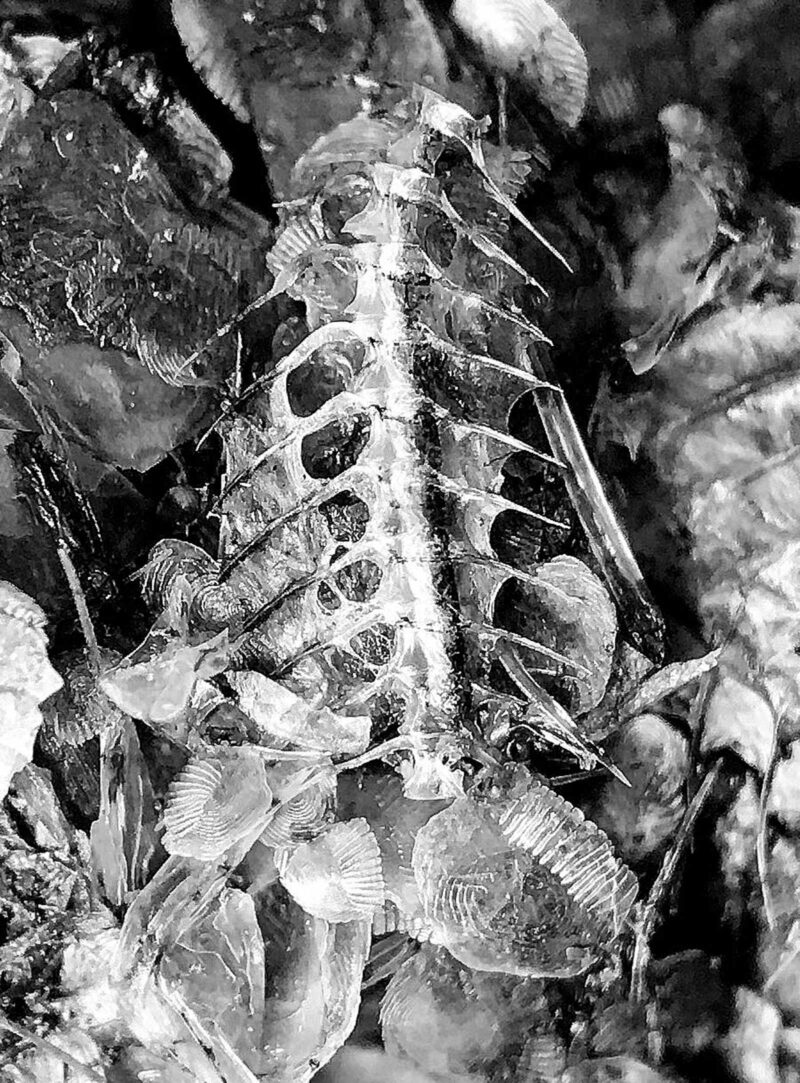 Which brings us otter latrines (“all roads lead to an otter latrine” – Estonian proverb). Like all winters, I’ve been taking advantage of how quick and easy it is to visit, via the ice, the multitude of otter latrines around the marsh. Some latrines have spraints full of crab exoskeletons, a testament to the distances and range of habitats otters will visit within their territory. (Otters didn’t catch that crab in the freshwater!)

The hefty amount of small eel skeletons at the latrines this season has been interesting as I hadn’t noted them in spraints in years past. They certainly had been present in some numbers, but from the evidence this winter it’s safe to say it was a good year for eel hatching in the marsh!

But there have been bones at two of the latrines that just looked different, different than anything I’d seen before. I assumed (what a fool!) that they were fish bones—which is usually a safe assumption. I figured they were (maybe) from a sculpin or another funky saltwater fish that the otter downed. The bones never fully looked fishy, and now I am wondering if they are turtle bones… This shell turned latrine perspectives upside down! We will continue our research on this!

Whatever the bones in the latrines turn out to be, I wouldn’t have seen the turtle remains if I hadn’t gone out with the sixth graders that day. The lesson and potential connections just wouldn’t have been made.

Lesson learned: explore outdoors with kids when you can

And while this find in itself would make any day complete, it was the laughing and enjoyment of being outside with kids that made the trip fantastic. The next day at a work meeting I was accused of drinking too much coffee by a co-worker of mine. I explained I was buzzin’ on kid energy and the turtle shell lessons.

The response was pleasant, if not enthusiastic, but I could tell right away he wasn’t a kid—the beard gave it away. I try not to hold that against adults, but sometimes you just need to hang out with students to get that kind of energy recharge.

And who knows, you might even find a reptile in winter!