Once land is conserved, it’s Maine Coast Heritage Trust’s responsibility to care for that land in perpetuity.

In 2018, MCHT stewards monitored and cared for more than 37,000 acres of conserved land up and down the coast, including more than 130 public preserves.

They created and updated signage, cleared and built trails, cleaned beaches, managed invasive plants, and keep nesting birds safe… And that’s not the half of it.

Outreach and engagement with local communities and land users is another critical component of MCHT’s stewardship work. Stewards also brought students out on field trips to preserves, organized beach cleanups, and worked together with other organizations and nonprofits to connect people to the land.

What follows are just a few land stewardship highlights from 2018—all multi-faceted (as you’ll see!) and all possible thanks to donor support.

Several years ago, the community of Milbridge reached out to MCHT about conserving a waterfront property in the center of town. Elsewhere throughout Milbridge, the Women’s Health Resource Library (WHRL) was transforming vacant greenspace into organic pick-your-own gardens, making healthy food more available to a community struggling with food insecurity. This project, called “Incredible Edible Milbridge,” was proving a success, and WHRL was ready to expand it—if only they could secure the land. 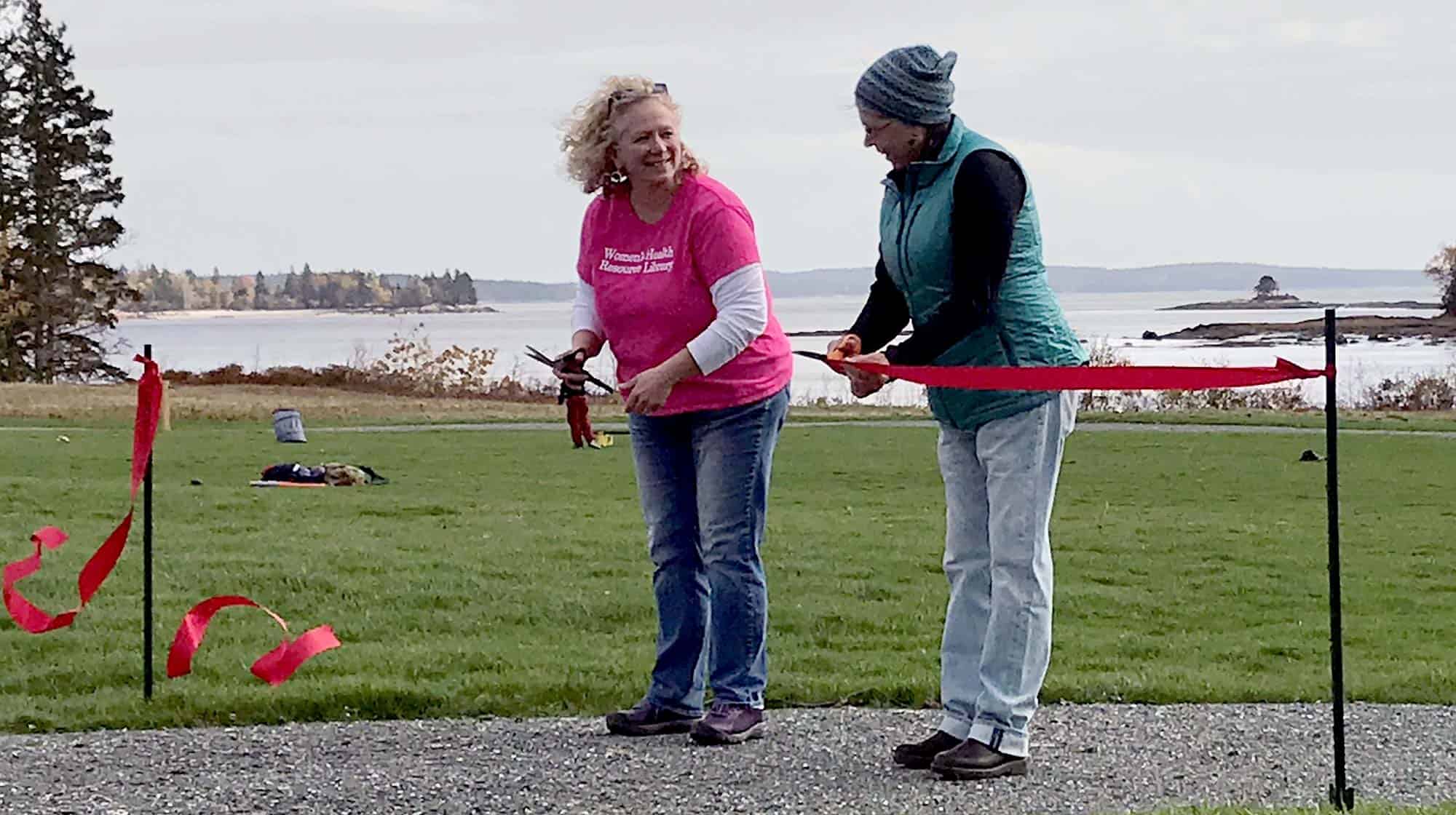 After MCHT acquired that special spot on the water in July of 2015, MCHT, WHRL, and the broader community came together to create a vision for the property. Beyond pick-your-own gardens, locals voiced a desire for a walking path and playground. Now, thanks to the generosity of many, the 4.6-acre space has visitor parking, a 975-foot walking path, a large plan and gathering area, and a 25,000-square-foot organic gardening space (and there are plans for an orchard).

After years of hard work, MCHT and WHRL celebrated the Grand Opening of Milbridge Commons in October of 2018. People from the community turned out to celebrate with live music from Cole Creek, a potluck picnic, Darling’s Ice Cream Truck, salad competition, face painting, and pumpkin carving contest. If you live in the area or you’re passing through this summer—be sure to stop by, take a walk, and check out new Incredible Edible Garden!

36 acres in Tenants Harbor transformed into a waterfront preserve

In 2015, Maine Coast Heritage Trust conserved a waterfront property on Long Cove in Tenants Harbor. Over the past several years, Regional Steward Manager Amanda Devine has been hard at work transforming the lovely (albeit scruffy!) parcel of land into a waterfront preserve.

She oversaw the removal of a dilapidated old building, and, with the help of volunteers from L.L.Bean, restored the converted site with donated plants from Pierson Nurseries in Biddeford. An overgrown thicket is now a meadow with pruned apple trees, and a trail leads down to the shore. Last but not least, the visitor parking lot is nearly complete. When it is, Bamford will be ready for visitors! Stay tuned—this preserve will be online soon. 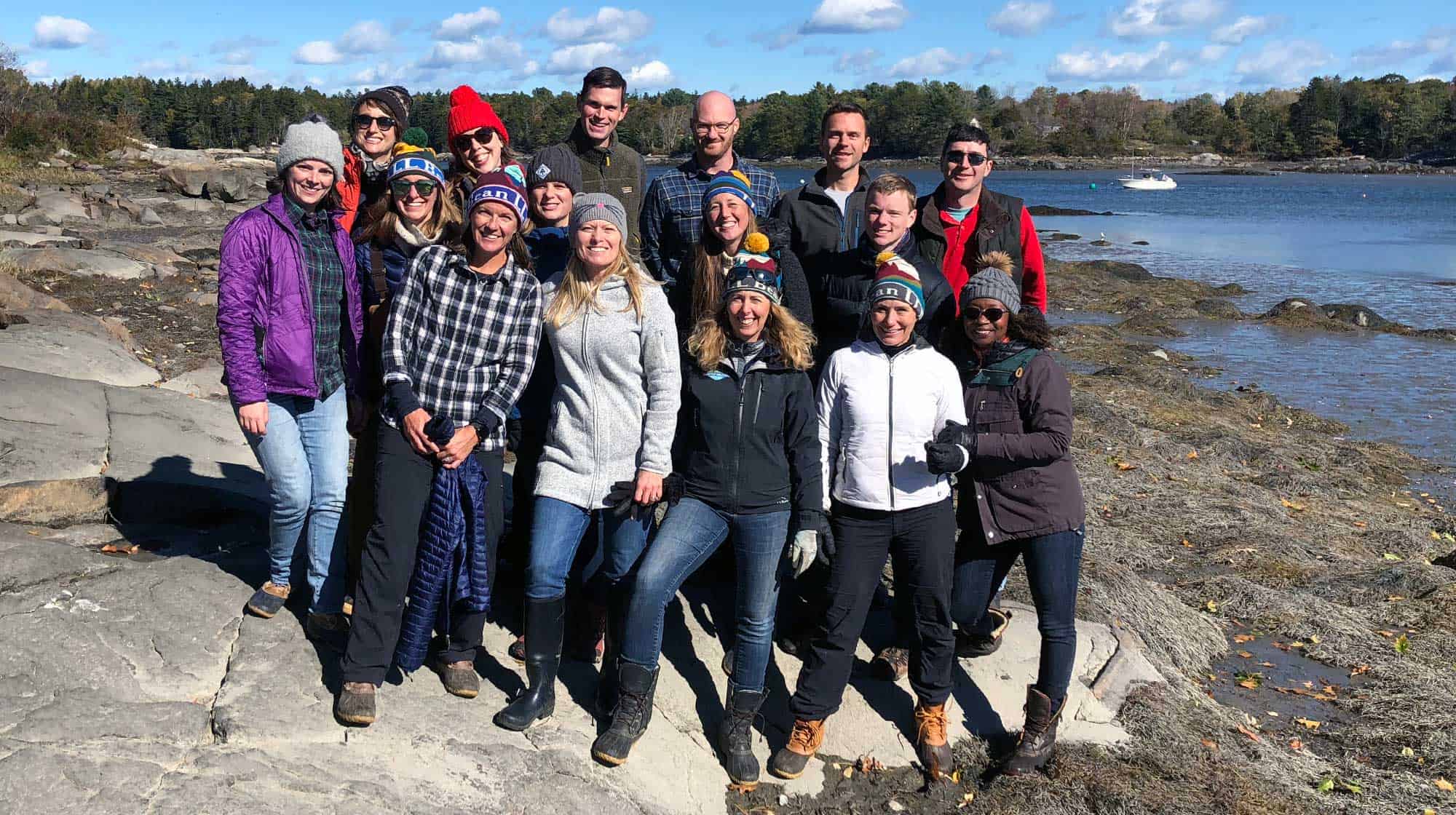 Volunteers from L.L.Bean pitched in at Bamford Preserve in Tenants Harbor.

re:past: an inspired event honors the people of Malaga Island

Around the turn of the twentieth century, people of African, Native American, and European descent made their home on Phippsburg’s Malaga Island before being forcibly evicted by the state of Maine in an act motivated by racism, economics, and eugenics. (Learn more about the history of Malaga.)

Over the past decade and a half, archaeologists and historians have been uncovering this shameful story so that we might learn from it and acknowledge the Mainers who suffered at the hand of the state. Since conserving Malaga Island in 2001 and opening it to the public as a preserve, it’s been Maine Coast Heritage Trust’s honor and commitment to help facilitate this ongoing project, and to share this island and its stories. 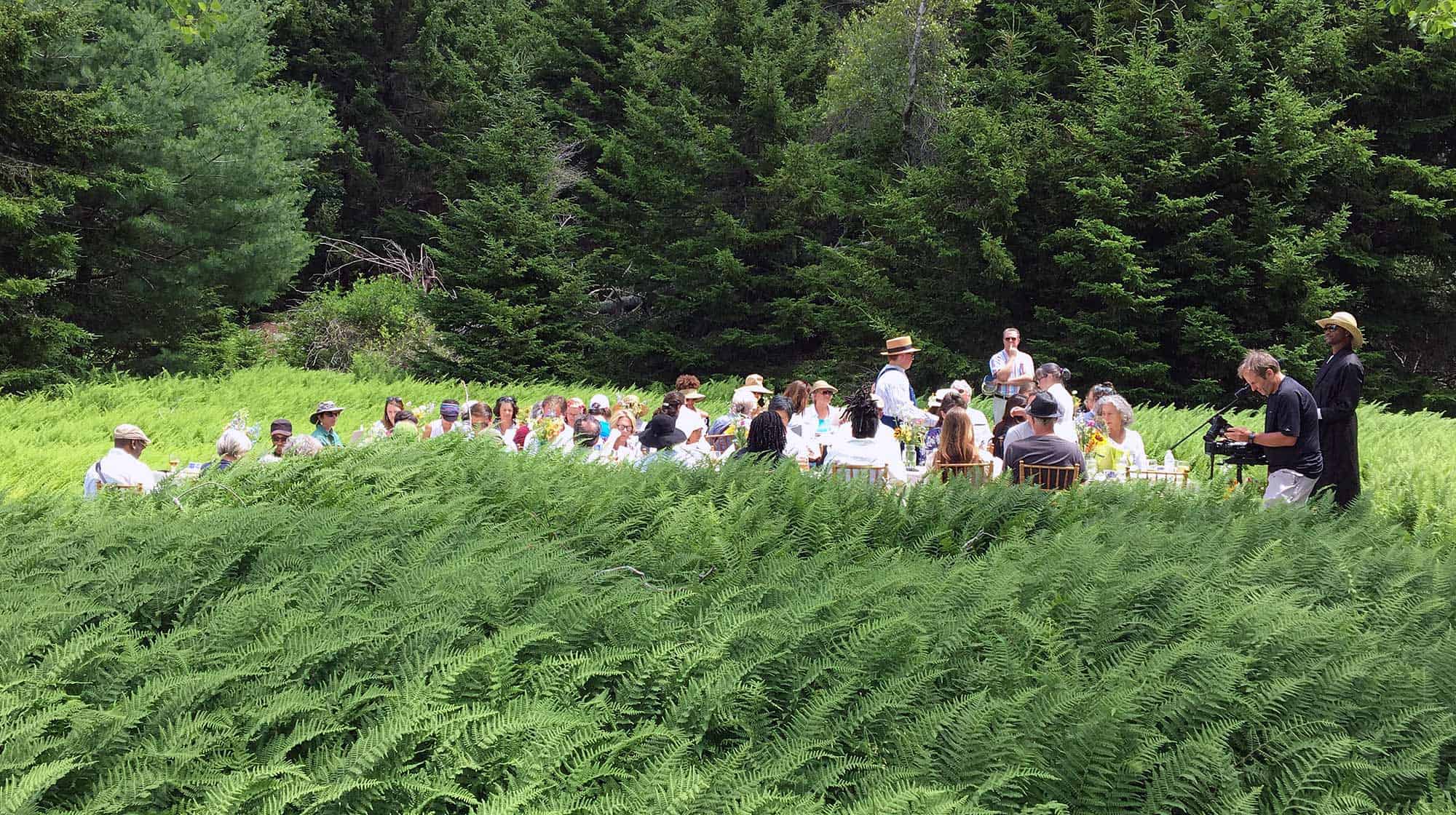 A special meal is prepared for attendees of re:past.

A special meal is prepared for attendees of re:past.

In the summer of 2018, MCHT’s Southern Maine Steward Caitlin Gerber had the opportunity to support an extraordinary event held on Malaga Island. The event, called re:past, was conceived by Myron Beasley, a professor at Bates College working in the field of American and African American cultural studies. Forty-seven attendees—representing the 47 people forcibly evicted from the island in 1912—attended a feast to honor the lives of those who lived on Malaga.

“I supported the effort as best I could, helping with logistics, transportation, clearing space for the feast and improving stone steps and re-routing a trail for better access,” says Caitlin. “The re:past was a beautiful, fitting tribute to the island’s history and an honor to witness. I’m glad MCHT could play a small part in such a special event.”

Read more about this event.

In 2017, MCHT conserved more than 2,300 acres of land surrounding Rocky Lake in Whiting. Since that time, Washington County land steward Melissa Lee has been in the process of turning this place into an MCHT preserve offering special opportunities for people to enjoy the remote beauty of Rocky Lake.

Through 2018, Melissa spent many hours poring over maps, walking the land, and soliciting input from neighbors and local community members. She paddled the lake on the lookout for the best camping spots (and found them!) and what trails need to be improved or built. 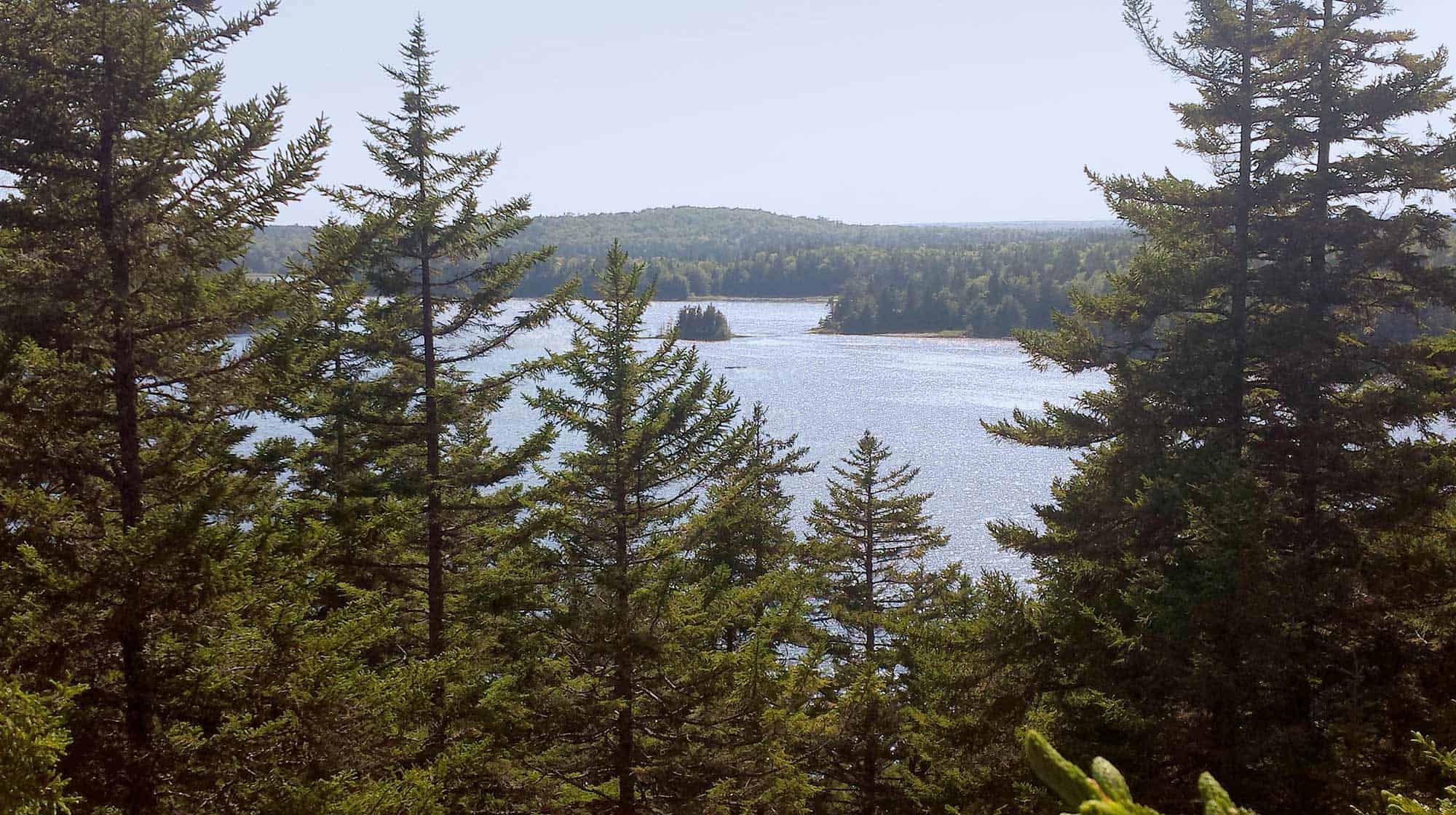 A view of MCHT’s Rocky Lake Preserve in Whiting.

“Rocky Lake Preserve can accommodate such a variety of activities,” says Melissa. “It’s a great lake for swimming, fishing, ice fishing, canoeing and other small boats.” A parking lot was recently finished at the north end of the property, where there’s hand-carry boat access.

This summer, Melissa will be preparing the campsites, doing trail work, and creating a handicapped-accessible picnic spot. “It’s just a lovely spot to sit on the rocks and watch the loons, dip your toes in the water, and look out at the sparkling water.”

For more information about all that was accomplished in 2018, visit the 2018 Annual Report.