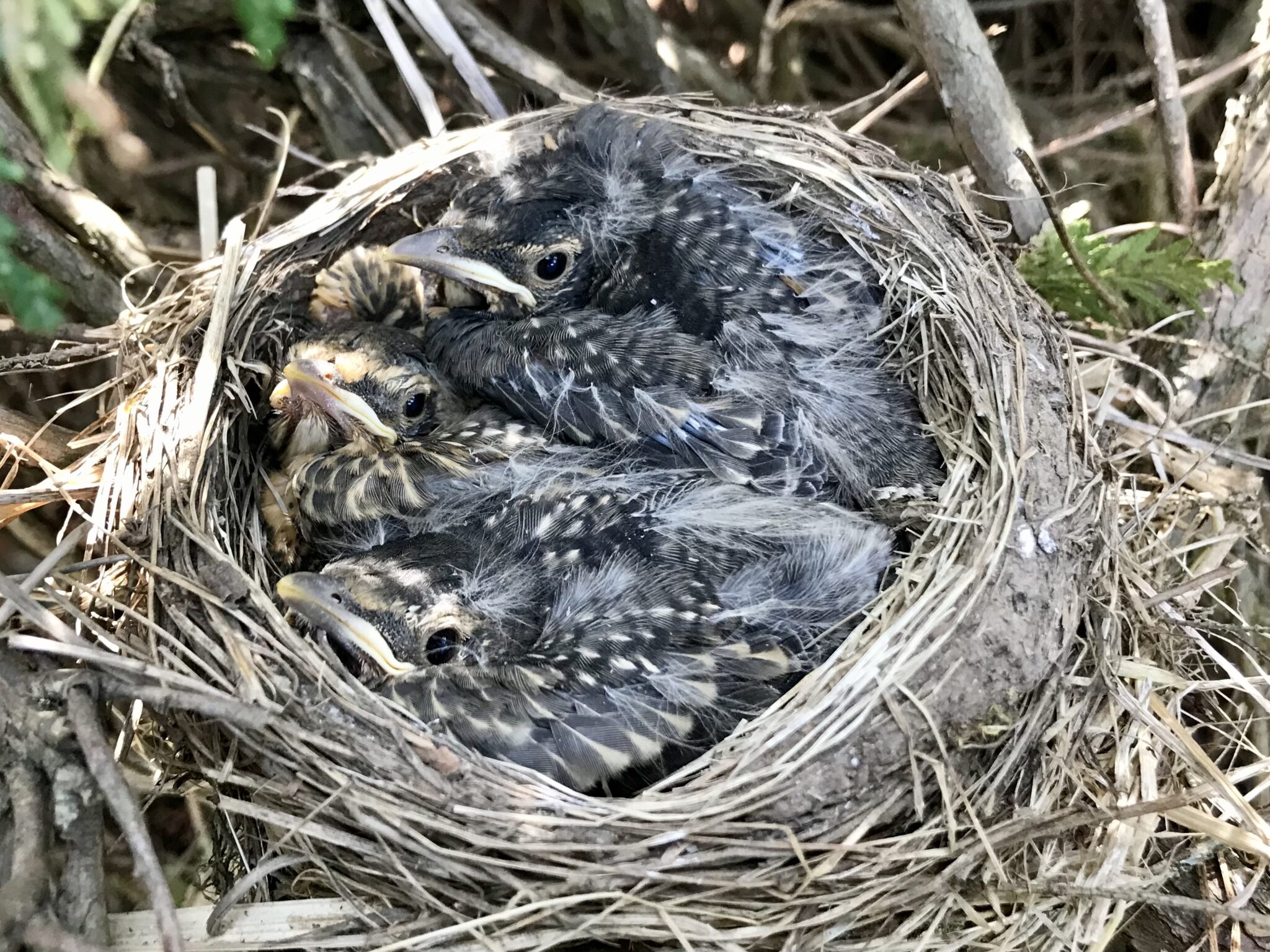 Robin nest with babies
Stories from the Coast >

It’s late June and the rush of pre-breeding songbird migration has subsided—somewhat. (Does migration ever subside completely? The answer is no.) The yard and neighborhood are not as lousy with bird song as they were just a month ago.

Don’t get me wrong—it’s not completely quiet. Phoebes still scratch out their ever-so-slightly horse call, and species like Song Sparrow, Golden-crowned Kinglet and Brown Creeper sing, albeit in a slightly subtle way, as they get ready for round two of breeding.

Bird-wise, the yard remains an audio distraction, but without the grandstanding, non-stop barrage of song inspired by territoriality and courtship from a short time ago. These are calmer times. 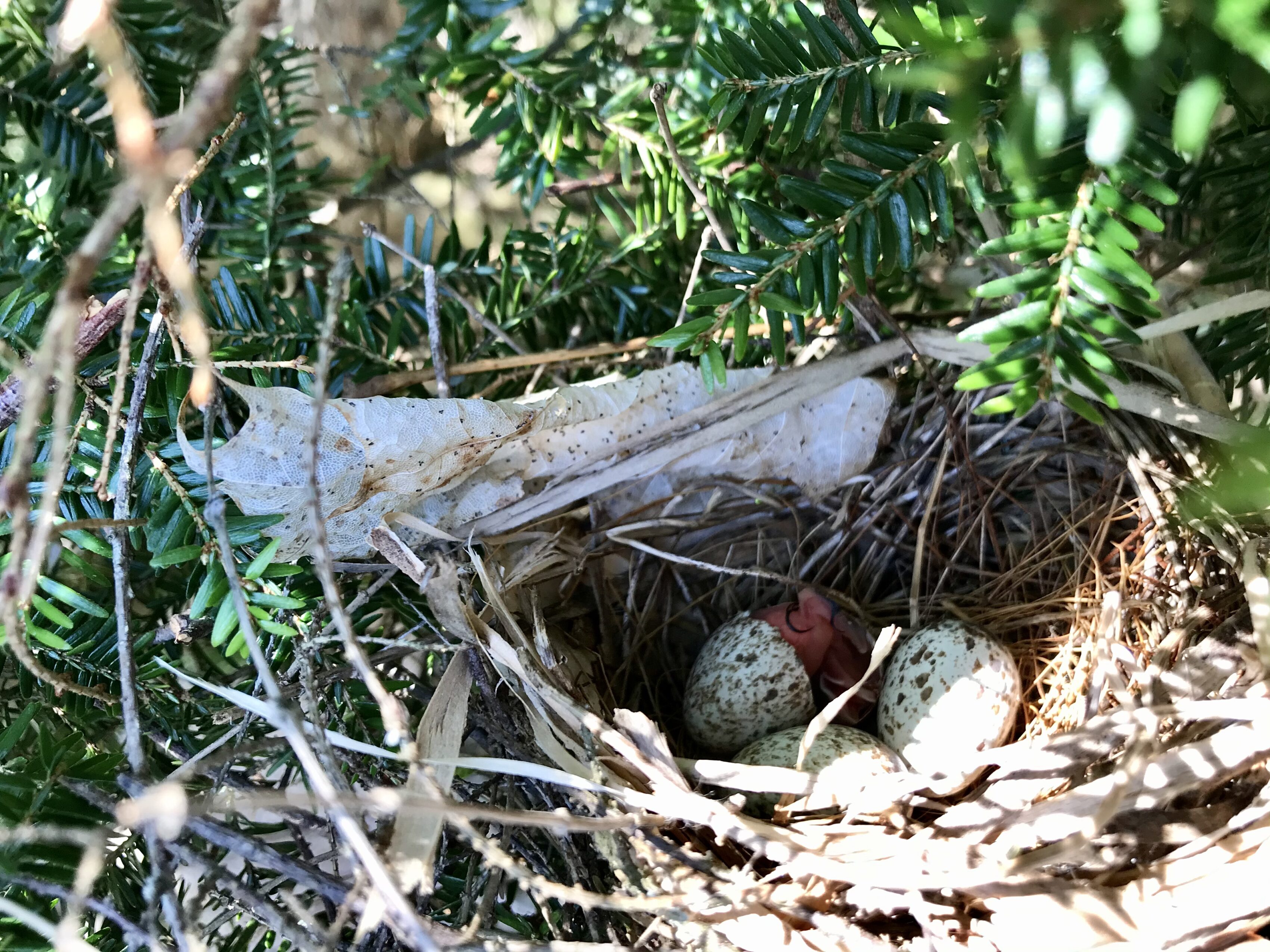 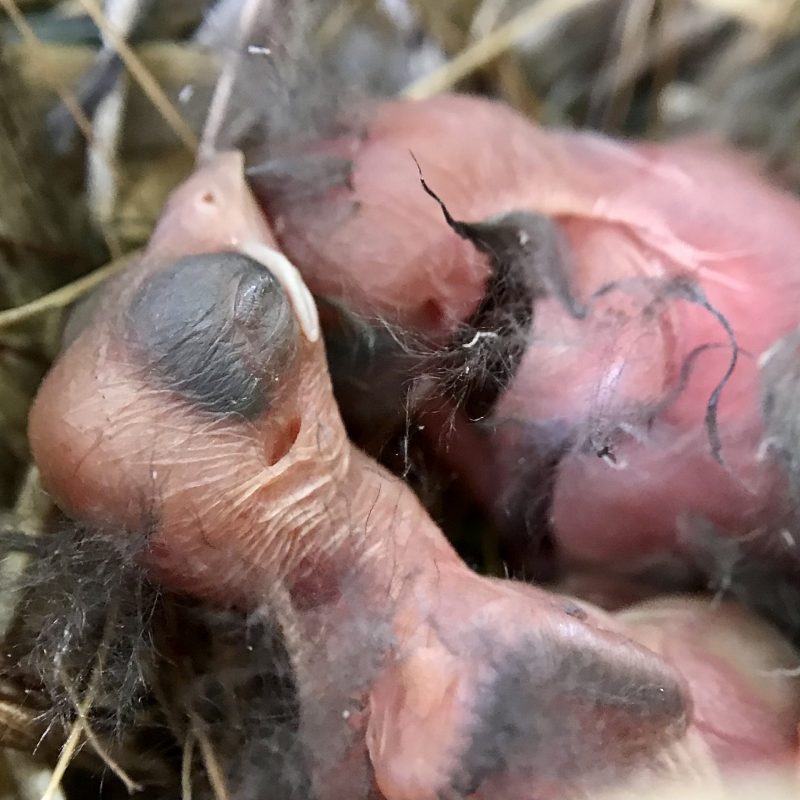 The yard this year has had its share of the regulars, and I suppose they are likely the same individuals from years past. The Northern Cardinals were especially vocal and present (AKA loud!) this spring, and Amy found one of their nests. It was fairly out in the open and by all definitions beautiful, with three off-white eggs sprinkled with red splotches, eye level (for me) and roadside. Great for viewing, but also a potential disaster. I happened to be there when the first egg hatched, or at least when the first chick was struggling to get out of the egg—even though I had promised with myself that I was only going to look at the Cardinal nest once a day and I had already looked that morning.

You see, I was actually out there looking for a Robin’s nest in the cedar thing (not a shrub, not a tree) near the Cardinal nest. They are, like seriously, some of the easiest nests to find. And I say that only because I find their nests every year and if I can find them, they can’t be that hard to find! (See the logic there?) Anyway, I had been watching the Robin adults flying out of one of the cedars with fecal sacs in their bills. Fecal sacs are a wonderful adaptation where a young bird’s feces comes out in packets, not very unlike a white Good N’ Plenty in appearance, but softer in texture. The parents of many birds remove fecal sacs from nest and drop them far away. It’s all part of their effort to keep the nest clean and hidden. I’d been watching the adults carry out these drooping sacs for days and for the life of me I could not find the nest!

And so, in that seemingly never-ending search for new view angles to access the inner jumble of the cedar where the Robin’s nest was assumed to be, I rounded the plant and found myself looking at a young cardinal. Feathers still damp (if that’s even what they are called at this point), it was hard at first to even know what I was looking at. Then I realized it was upside down and appeared to be using its little featherless wings to push itself out of the top of the shell where its head, once again, appeared to be stuck.

I snapped a few shots and got out of there. I didn’t know if the parents would come in to help or whatever, but I was not going to get in the middle! The next morning, I returned and could hear the chicks from a distance away. Yikes. Loud and hungry—at their most vulnerable.

I snuck in to check and saw all three were free of shell parts. The good parents had removed all shell bits in an attempt to eliminate clues that would lead a predator to think there was a nest nearby. What they can’t eliminate is loud youngsters. I rode my bike by later that afternoon and the nest was in disarray, as if a jay or a crow had discovered and turned the place upside down to make sure it didn’t miss anything. So ended that chapter. It was a little more drastic change for the cardinals than for me, but a little startling nonetheless.

And of course, the very next day (do I say that a lot?) I was emptying out the work vehicle when I heard the Robin nestlings making a racket, probably while being fed. I glanced over and there it was—the straight angle, the clear shot of the nest of my dreams. I had been looking too high. What an over achiever I can be. Now that was the way to hide a nest! 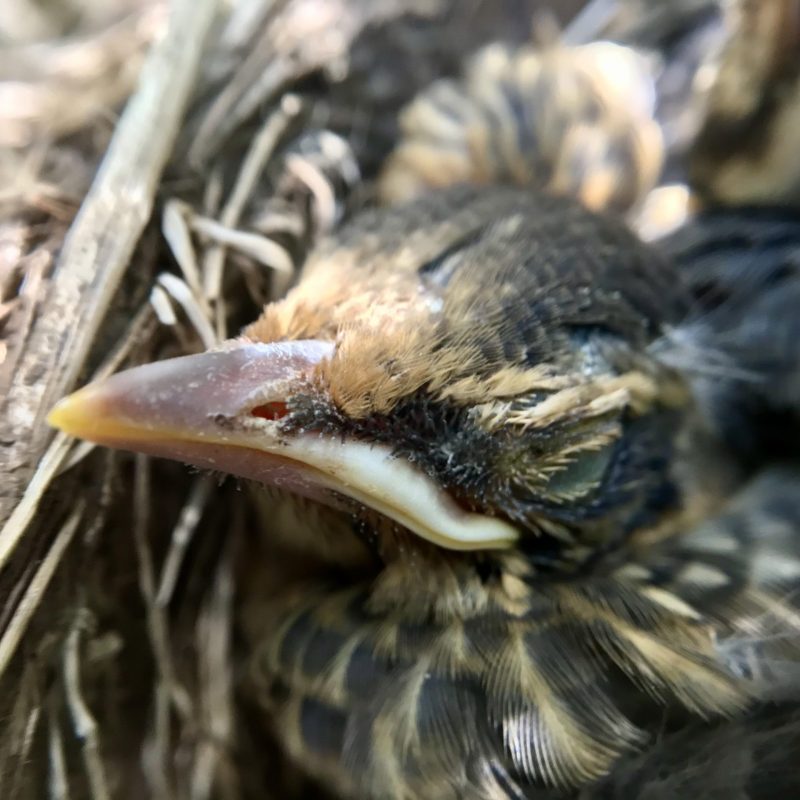 And with that a new (to me) nest was there to watch. The youngsters were big—almost ready to fledge—and had little-to-no-fear and didn’t acknowledge of my presence. When I went in close for the photos they actually all fell asleep. Maybe from a food coma inspired by the feeding visit moments before. (Thank you, Robins.)

And then they were gone, just days later. Fledged and on their way to the next dangerous situation. It was seriously like: what the heck?! Things grow so fast these days.

Not too long after we started to notice a female turkey sticking close to the fields out back. We see turkeys often, but this one was staying in the deeper grasses, only its head and partial neck were in view. From the house we watched as she worked her way across the fields, and sure enough if you looked close enough when she crossed open areas you would get a view of one or two little brown fluffs following her. Turkey chicks! I mean, come on! We got a family here!

The turkeys out back are fun, but you have to be inside the house to enjoy them—so thankful for that glass door! They’re super skittish and if you even think about joining them in the “great of outdoors” they will disappear.

And then one afternoon I decided to take some photos of Crab Spiders that live on flowers in the fields. As I got into the field a turkey head popped up not twenty feet from me. You see, when taking Crab Spider photos I go super stealth. And now I had surprised the turkey!

My momentum took me one step forward, and that was apparently one step too many for the momma turkey as she took to the sky in a burst of flutter (also known as a “flurst” or “butter”). And with that, the youngsters started to rise up as well! One after another took to the air in a desperate flight from the scary man taking spider photos (which turned out good, by the way).

One, two, three, four….five, six, seven—wait, I thought there was only six!—eight, nine, ten, eleven, twelve! I counted a sweet dozen of them—still tiny, but clearly able to fly away from danger. I did not feel bad about startling them up. Sometimes I feel bad about these kinds of things; this was not one of those times. 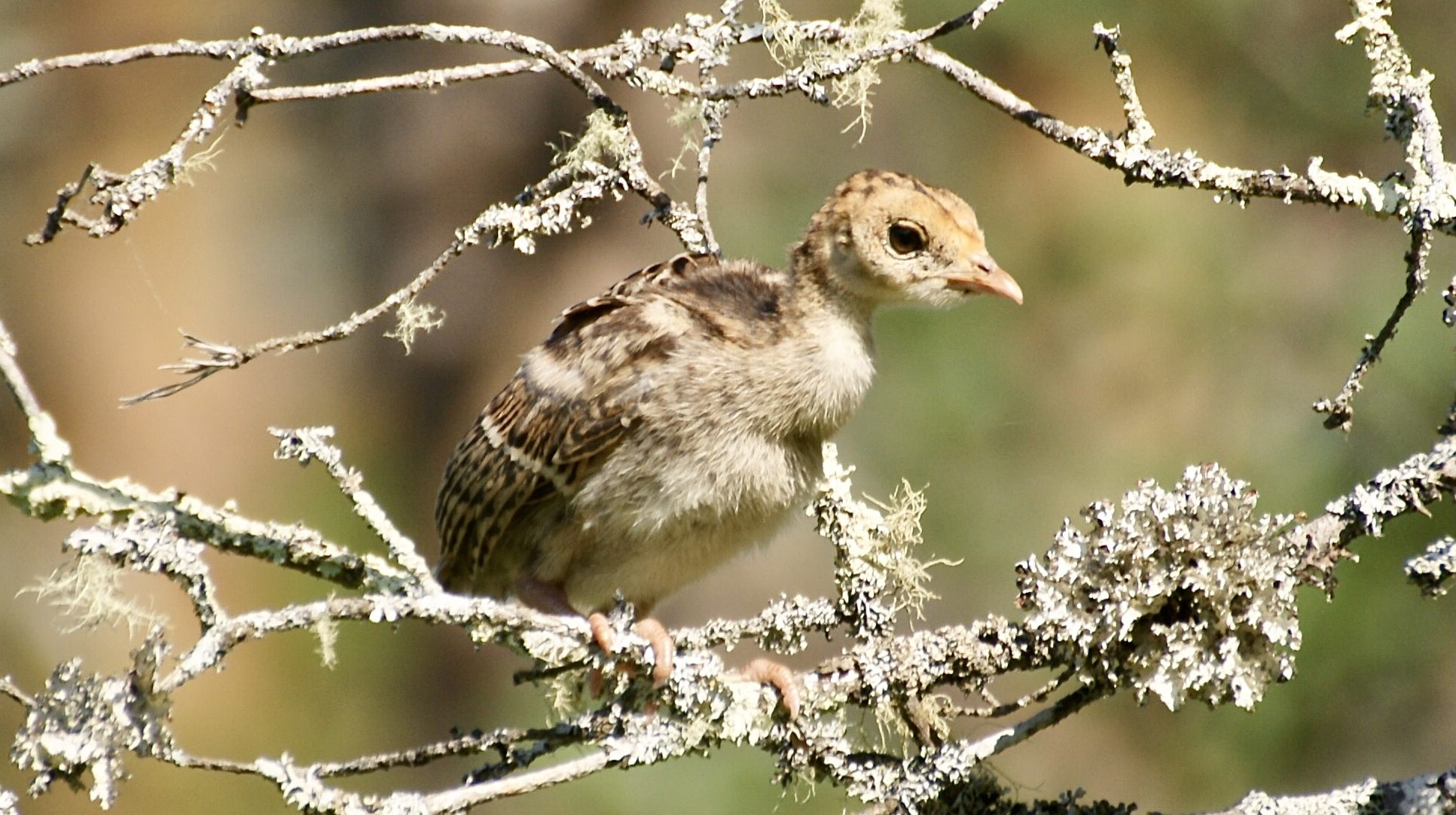 Nor did I feel bad that three of the little brown fluffs floated over and miraculously landed in a series of snags I leave along the edge of the field as perches for just such times! I never get to photograph turkeys, they are too aware and alert, which I guess pays off when you are a (mostly) ground dwelling bird. Anyway, chirping contact calls with the mom close by, checking me checking them out, these three put on a show, and when I say show I mean they stayed way out in the open where I could get a good look.

Once again, I didn’t want to be in the way too long, and I was looking for spiders after all, so I slithered away as stealthily as I had approached. I could hear the turkey and child reunion when I was a little further away, and things were back to normal (whatever that is).

The yard bird scene continues to evolve, as does the insect, the mammal, and the plant scenes.

Some pass through, some stay for a while, and others raise their young. Whatever the connection, whatever the use, I’m glad to check in on it as often and whenever I can. Baby bird time is just another thing on the never-ending list of things I like about outside. I mean, it’s only natural.