My original intent was to write a column about nature distractions at work. It was going to (and still may) be called: “Focus on Distractions.” But then I started finding fishing spiders (Dolomedes triton) on ice and, let’s face it, spiders on ice demand attention. So, I got distracted from the column about distractions. I can only hope I can finish writing this sentence before the next distraction comes along.

Anyway. At this point the St. George Marsh ice and snow status update can be summed up in one word: unreliable. Or maybe it’s unpredictable. So, two words.

Last winter the ice developed in November and lasted well into April. It was truly amazing and ice enthusiasts one and all were spoiled by the conditions. The frozen water was thick with only a handful of openings used by otters to access the water world below. Otter fans, collectively known as “otterheads,” could focus their tracking efforts on these distinct locations to gain local otter knowledge. Glorious times for sure. 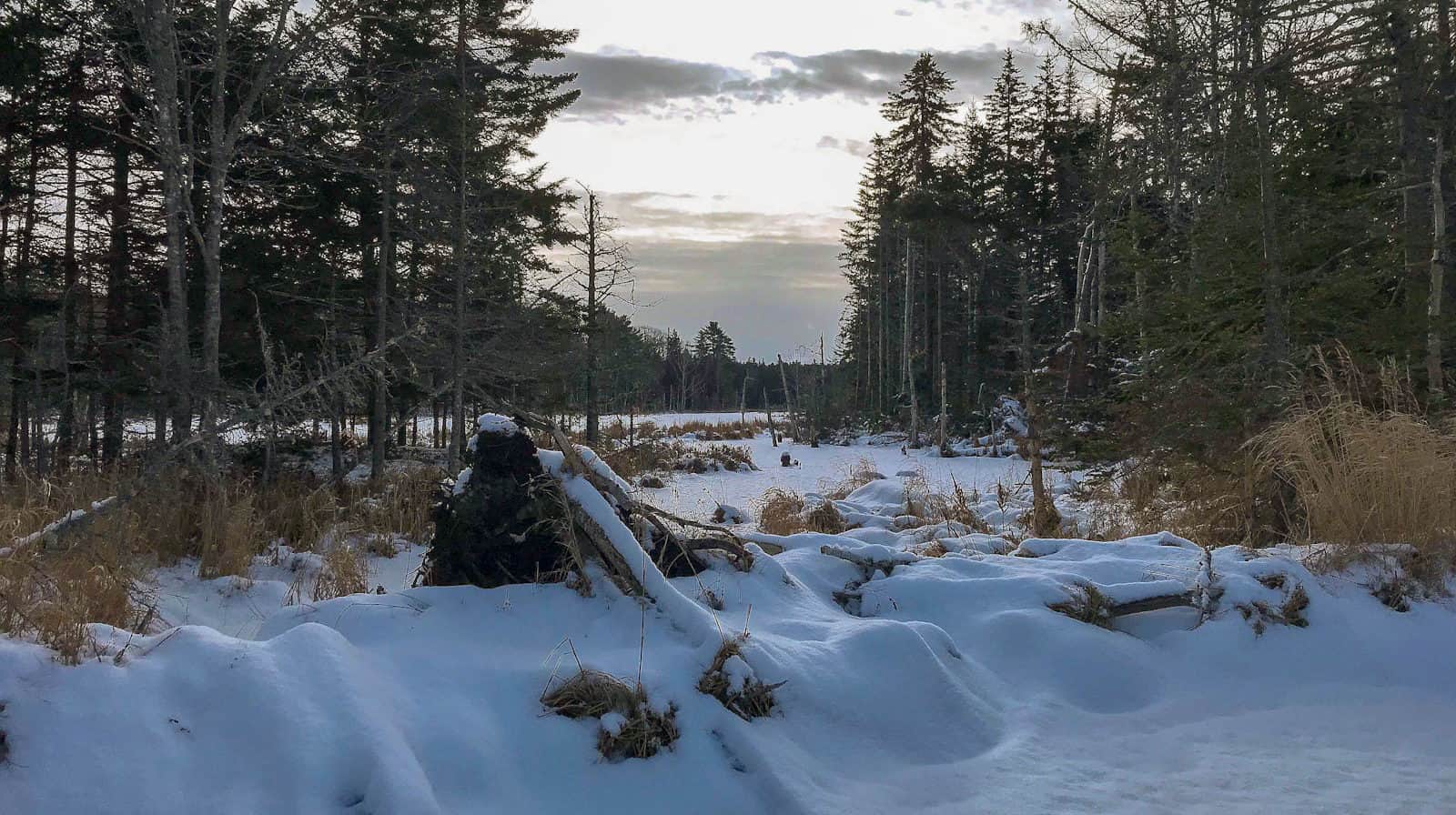 Kirk’s noticed that the water is low this year. In the past, the ice went to the top of the beaver dam pictured in the foreground.

This winter has been glorious in different ways. (Every winter is different and every winter is glorious, of course.) The season is a little over a third of the way through and we’ve seen the ice on the St. George Marsh come and go multiple times. 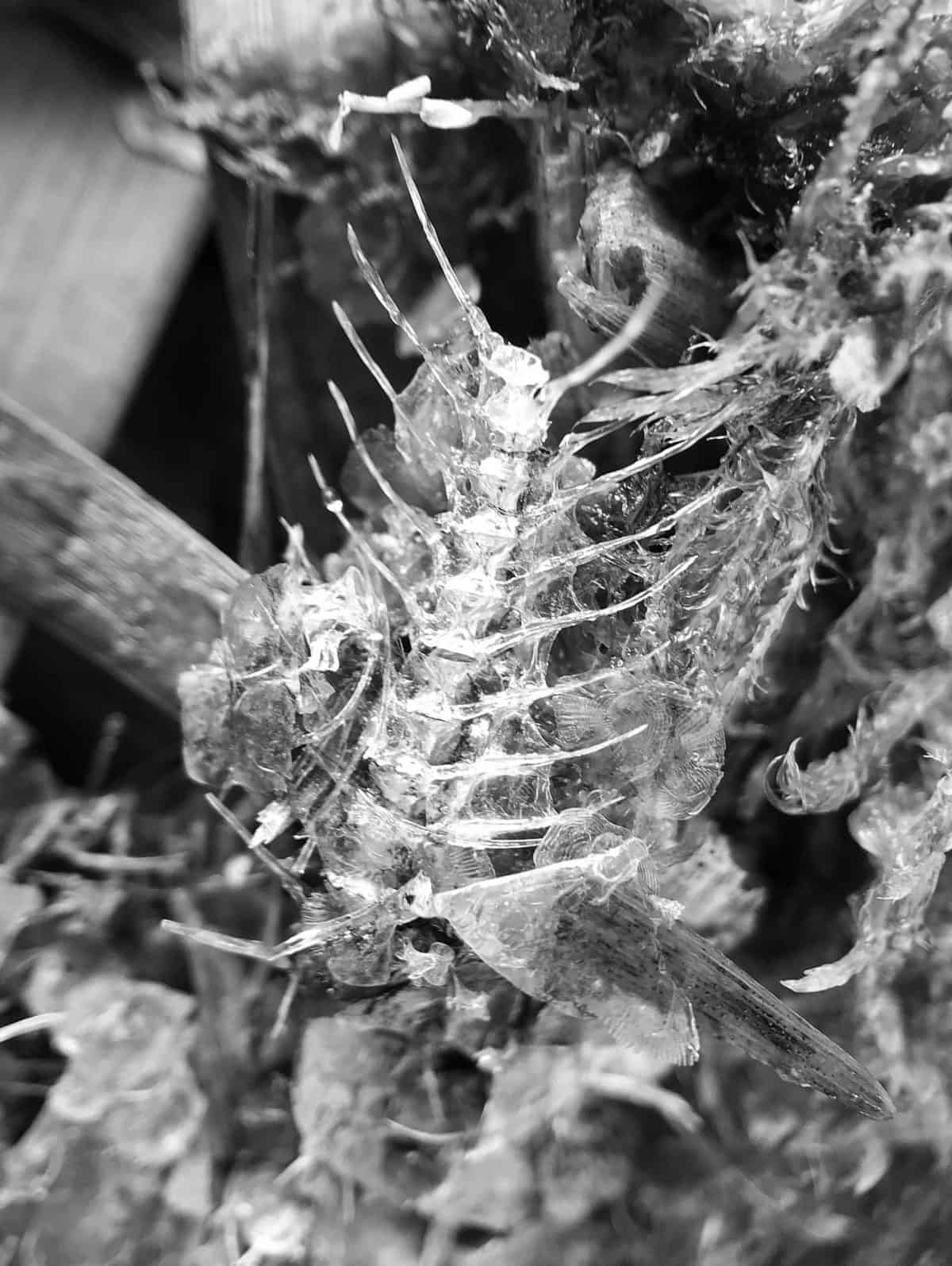 A rock gunnel (fish) backbone found at an otter latrine. (Kirk says, “This could not have felt good coming out!”)

The melting and re-freezing process has left the ice smooth in places, lumpy in others, and dangerously thin or completely open at spots. Spoiled ice enthusiasts have had to pay attention to conditions for safety’s sake (what a hassle). The local otters seem to be taking advantage of the conditions though, creating two new latrines (marking areas) on shorelines where the ice has been thinner than years past. They flow with the changes and are always ready to spraint!

The melting appears to have affected water levels in the marsh as well. Shrubs, hummocks, and islands covered in ice and snow in years past are, at this point, fully exposed and accessible. Insects, arachnids, and other arthropods that traditionally overwinter in moss and leaves under the snow and ice in these areas are now free to soak in the warmth of warmish winter days. It’s a whole different feel out there. Which brings us to those spiders….

From what I gather it’s not unheard of to find spiders active in a Maine winter (and you heard that right here!). That said, in my limited experience (sixteen Maine winters), I don’t recall ever seeing a “January” spider before. So, as you can imagine, finding a large (three inches!), female Six-spotted Fishing Spider (SSFS) on the marsh snow in mid-January came as a complete surprise.

Why did the spider cross the ice? 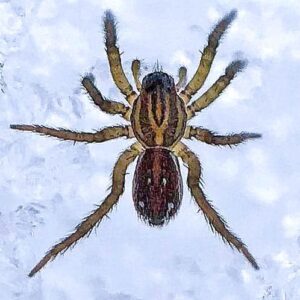 A Six-spotted Fishing Spiders makes its way across the ice in January.

It looked as if she had come out of a patch of cattails and was heading… I don’t know, east? That was about all I could definitively say. And she was active at 25 degrees no less! She must have been tapping into some warm microclimates or have antifreeze running through her because the last time I checked, 25 is below freezing and she is (no offense) cold-blooded. This totally caught me off guard. It begs the question: why did the spider cross the ice?

I did a little research on fishing spiders, aka “Eight-legged Anglers,” and lots of summertime information turned up. Their fishing techniques and cannibalistic mating rituals are very interesting, but info on overwintering strategies and adaptations were sparse.

One study in Alberta, Canada showed that fishing spiders hibernate over two winters as they grow and mature into adults. Another article suggested that all adult Six-spotted Fishing Spiders die each fall, leaving egg sacs for the next generation to repopulate the species each spring.

The spider I saw was neither hibernating nor dead, however. (Reminder: bring many grains of salt with you when doing research on the internet.) Moving on…

Life kept me off the ice for five days and I didn’t think I’d find any spiders when I ventured out again the following week. Boy, was I wrong! 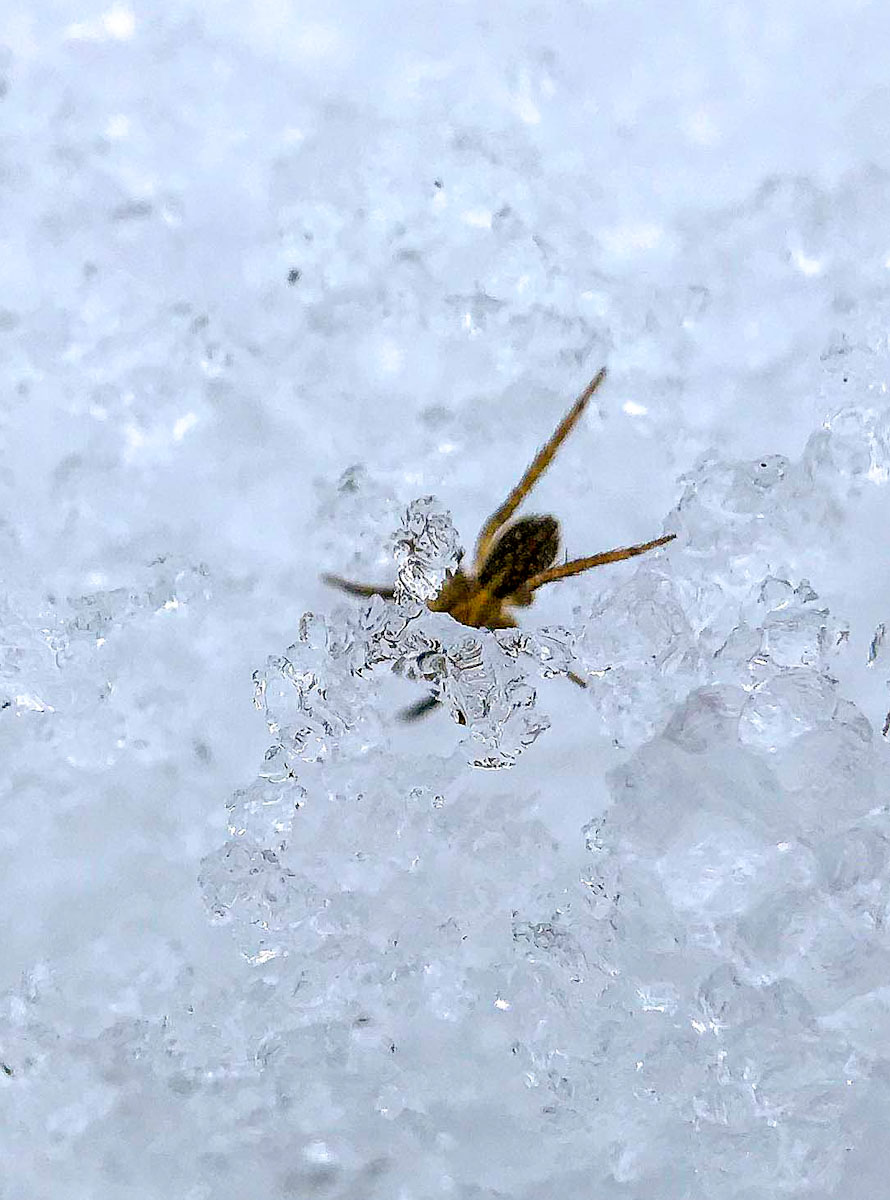 Even though the sun was setting I came across spider after spider on my walk (I stopped counting at 40)! These were smaller (about an inch), but were the same species (SSFS), either males or possibly juveniles.

The spiders were booking it across the ice, taking advantage of the 40-degree weather. For the most part, my presence did not seem to affect them. The random spider that appeared to be threatened reacted in a very curious way. They would dive quickly into the icy snow and remained motionless but clearly visible—a dark spot in the white! To summarize: we have a cold-blooded animal walking on snow and taking refuge inside of a frozen terrain. Unbelievable.

The next day, Amy and Leif joined in on what became a family spider search. We found over 60 in about an hour and a half, all moving east, all on the ice (which now had puddles of water scattered throughout), and all SSFS! Truly an arachnid winter!

I wish I could tell you what this all means as far as the spiders go, but I can’t. What I can tell you is that it was super cool and I’ll be looking more closely for them in the summer. There will be a follow up column then. So, until then, watch your step—there are spiders in the snow!