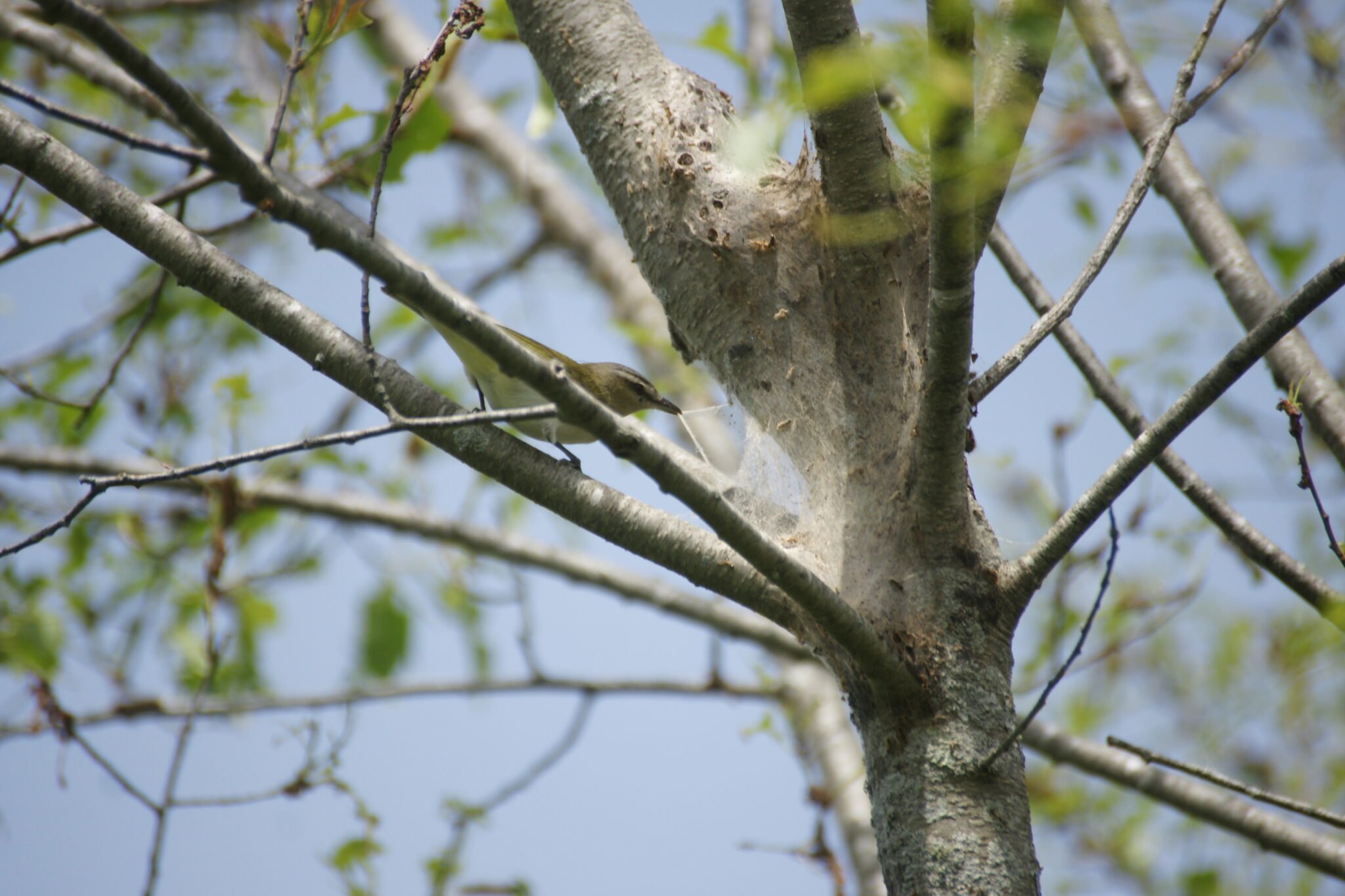 Call me old fashioned, but when it comes down to it, I am a bird guy. Through and through, plain and simple. They distract me when I am driving, get more fist pumps per year than other group in the animal kingdom (averaging over four fist pumps per year), and are the first thing I notice when visiting a new place. Or when I step out my door in the morning. I like birds. I like to bird watch.

And with that, it’s no surprise that spring migration is an observable nature event that I greatly enjoy. Songbirds, raptors, nighthawks, shore birds, and sea birds—you name it, it’s moving through.

One of my favorite places to take in spring migration is the Erickson Fields Preserve loop trail in beautiful Rockport, Maine. There’s always plenty to see and often the birds are low and easy to spot.

This is where MCHT traditionally offers a Memorial Day weekend bird walk, led by yours truly. However, with COVID and all that, this is the second year we’ve had to cancel the walk. I look forward to (hopefully) having a normal-ish bird walk there next year! The place is great. 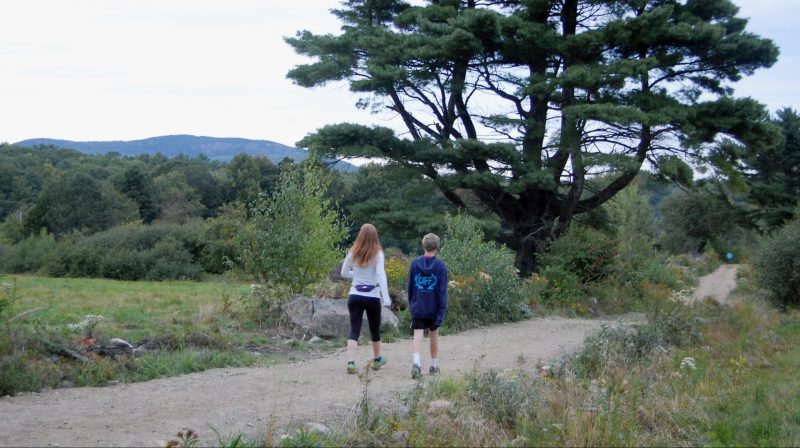 Walkers enjoying the trail at Erickson Fields Preserve in Rockport

Whether or not MCHT offers a bird walk, it should be noted that the birds are still there. And so for the second year in a row, the trifecta known as Kirk (me, myself, and I) strolled the preserve at about the same date and time the event would typically have been held, just to see what there was to see.

Even before I left the parking lot, barn swallows (the Estonian national bird) zipped over the fields catching insects on the wing and catbirds were singing from the riparian zone (the water’s edge) at the bridge crossing.

From the bridge, which is a great spot to stop and listen, I photographed a chestnut-sided warbler (what a year for them, huh?) singing its heart out and American redstart darting from branch to branch, flycatching and singing as well. Two of my favorite warblers for sure (but then I say that about all warblers). Common yellowthroat and alder flycatchers rounded out the zone—the walk felt complete and I could still see my car!

Can you spot the bobolink unusually high up in a tree?

It’s tempting to charge through the field portion of the trail system, all exposed and toasty hot on many days—this day included. And while the wooded portion of the trail is tempting with its fine variety of songbirds, when walking through the field you want to keep your ears open for bobolinks and their crazy, garbly song. Sure enough I found one male bobolink atop a huge eastern white pine—one of many scattered in the fields. They’re great trees for perching, but I’m not sure I have ever seen a bobolink up so high before. In the heat of it all.

Two of my favorite warblers were singing as I entered the woods—the ovenbird and black-throated blue warbler. These two have distinctive songs. The ovenbird’s booming “teacher, teacher, TEACHER!” always gets a smile, while the black-throated blue’s loose and slurred “ber, ber, ber, beeeeee”  stops us in our tracks, as we patiently waiting for the singing bird to show itself. I often find both species to be lower in the canopy than expected, offering surprisingly close looks if the observer is patient enough. There is no excuse for being out patienced by a bird. Well, there are some excuses, but no good ones! Truth hurts. Tough love, bird-style.

Both red-eyed and blue-headed vireos could be heard during the entire walk, with red-eyeds coming low looking for (and finding!) inch worms and other leaf-munching insect larvae. One red-eyed swung in and inspected brown-tailed moth webs. I was hoping to see the vireo eat some brown tail moth larvae, but only saw it collecting webbing for nesting materials, which was still cool!

Multiple black-throated green, yellow-rumped, and magnolia warblers were heard along the loop, and northern parulas were scattered in small numbers. A highlight, and favorite warbler, were the blackburnian warblers—also known as the flamethroat. A single (as in one, not necessarily as in relationship status) male was staking claim to an area of the forest, and found a particular low, exposed branch that allowed for his song to carry further. Or so I suppose, I guess, as he stood singing, gripping his branch perch tightly with his tiny feet, letting the bald observer below snap a handful of decent photos. That was nice.

Towards the end of my time on the loop I heard another of my favorite sounds—nestling woodpeckers begging. I mean, it would probably be a little annoying if I was one of the adult woodpeckers, but listening for the youngsters who might beg continuously for hours, allows you to find nest cavities even if the chicks are too small to climb up to the cavity opening. Baby woodpecker time is fun.

At this particular nest the young were big—looked almost to be full grown even—and were at the cavity opening letting their parents know they needed food pronto. The female hairy woodpecker came in twice and feed the head (mostly mouth) as it lunged from the nest in hungry desperation. (Makes me appreciate my kid all the more.) 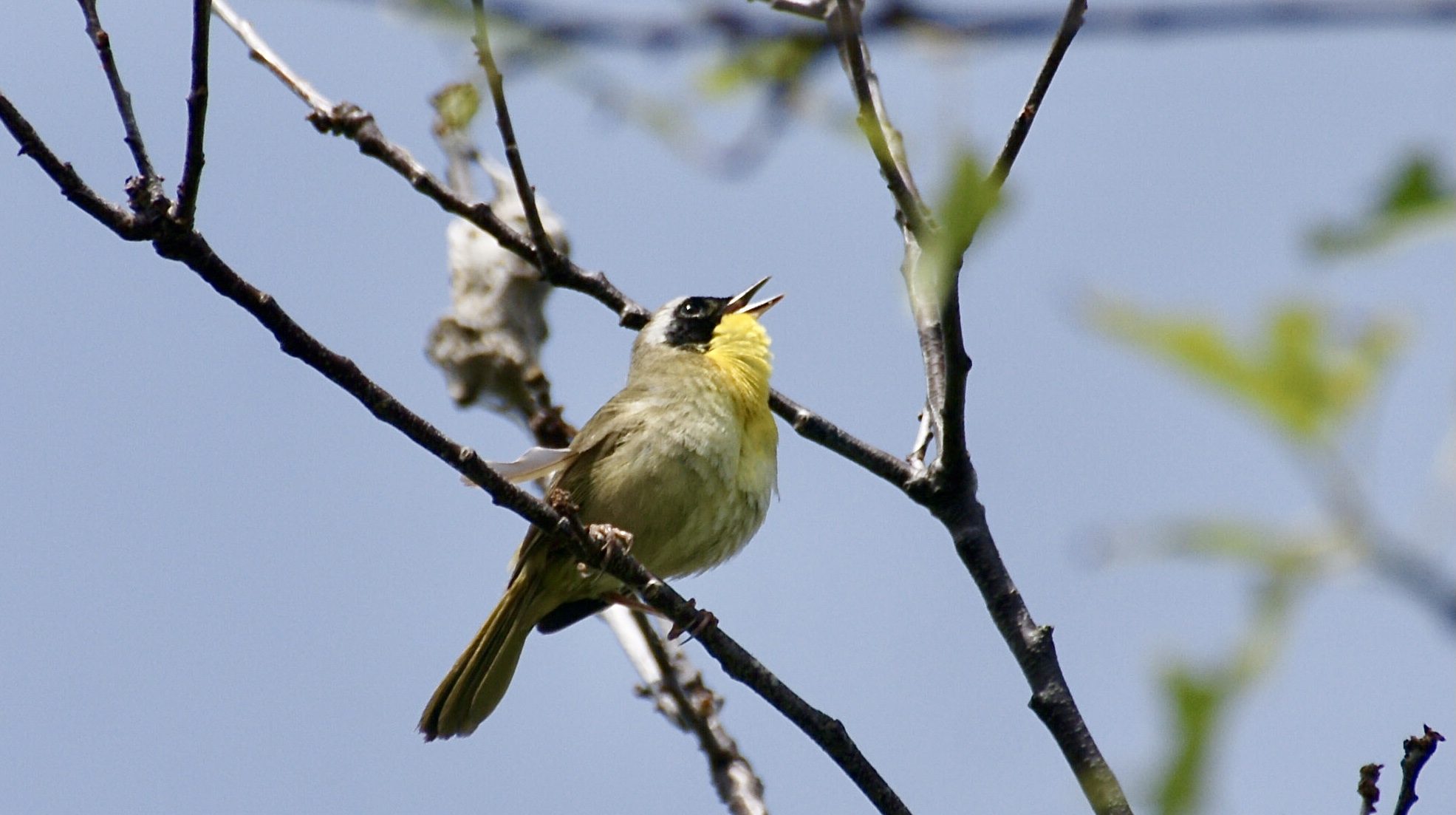 And so yeah, it would have been a great bird walk, one open to the public and all. At the same time, it was a great bird walk. Even if it was only me and the nice runner, Kathleen (?), who stopped to chat birds and bird songs. I like those interactions, too! But the bottom line is you’ll find that nature goes on whether we’re watching it or not.