I Dream of Alewives

Bailey arrived at the Penobscot Town Hall with a detailed plan for improving fish passage in the Bagaduce River watershed and, he readily admits, his fair share of skepticism. “I was not a big land trust proponent three years ago,” he reflects. But Ciona wanted to listen, and he had a lot to say.

Bailey grew up playing in and around the Bagaduce River. “Any free minute we had we were fishing or hunting or clamming—that was just what you did,” says Bailey. He was the chair of the Penobscot Shellfish Committee in 2012 when green crabs invaded, wiping out clams, mussels, and periwinkles, and eroding the banks of salt marshes filtering bacteria. “For the first time, that got me seeing all the small components that make up the big picture,” he says.

“When protecting land, you can’t ignore the connection between land and water habitat. What’s good for one is good for the other.”

One of those components were alewives, known in Maine as “the fish that feeds us all.” Their numbers had been dwindling for years, and the local ecosystem was suffering for it. Bailey’s dream was to install fishways to connect the upper reaches of the Bagaduce watershed with the ocean, allowing alewives to complete their annual migration to spawn upriver and return to sea.

But he didn’t just want to bring the fish—and the local alewife fishery—back. He wanted to bring people to the water to see the ecosystem thriving. He also shared with Ciona his dream of a parking lot big enough for a bus to turn around in, a handicapped-accessible trail to the water, and signage to education visitors about the important of sea-run fish. MCHT got on board to help Bailey and the town of Penobscot.

The Bagaduce watershed has long been a conservation focus for Maine Coast Heritage Trust. As Director of Land Protection Betsy Ham says, “When protecting land, you can’t ignore the connection between land and water habitat. What’s good for one is good for the other.” 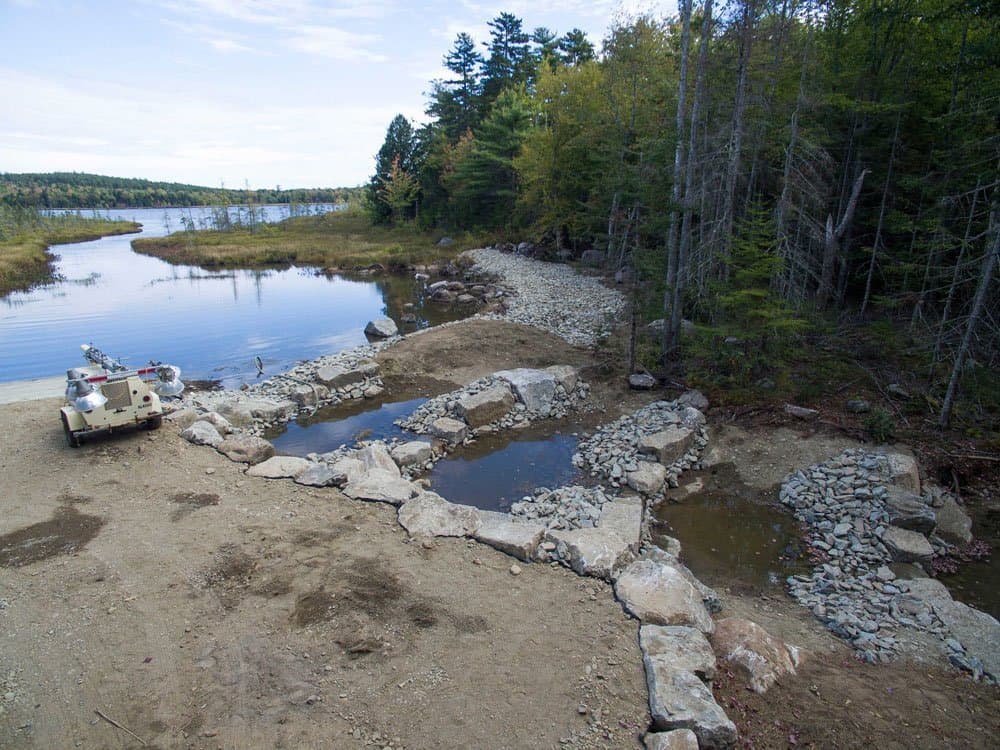 “He didn’t just want to bring the fish—and the local alewife fishery—back. He wanted to bring people to the water to see the ecosystem thriving.”

After years of planning, in August of 2018, engineers, conservationists, and local representatives gathered to break ground on the first of two nature-like fishways in the Bagaduce watershed. “Without Ciona and MCHT’s support, none of this would have happened,” says Bailey. “People are looking at this and saying, ‘Wow.’ It’s had a big community impact, which is only going to get bigger as the project continues and people see the final product. We’re riding a wave.”

In the video below, produced in 2018, Bailey Bowden and Ciona Ulbrich share more about the ongoing work to restore the Bagaduce watershed.

In the spring of 2018, some of the fish runs in the Bagaduce doubled thanks to the recently completed restoration work. In 2019, a second fishway was installed.

In July of 2020, the third project in the watershed-wide effort to restore fish passage began. This project takes place on a small property owned by MCHT at a former mill site at the head of the Bagaduce River. This is the third in a set of five projects prioritized by the Three Town Alewife Committee.