This just might be the third Nature Bummin’ column in a row about mushrooms, which might just be a record, and I just can’t see anything nothing wrong with breakin’ records (especially mushroom records!). The summer of 2021 could justly be referred to as the Summer of Mushrooms for Midcoast Maine and most, if not all, of New England. And as mentioned in the last column of Nature Bummin’, the more-than-typical summer abundance of mushrooms can be attributed to the wet July and August.

One group of mushrooms that has seen a significant late summer bloom has been the corals. Like their name suggests, coral mushrooms release spores that range in shape from stalk-like to stalk-like-with-branches, and often resemble Cnidarian Coral one might find in in an ocean reef. 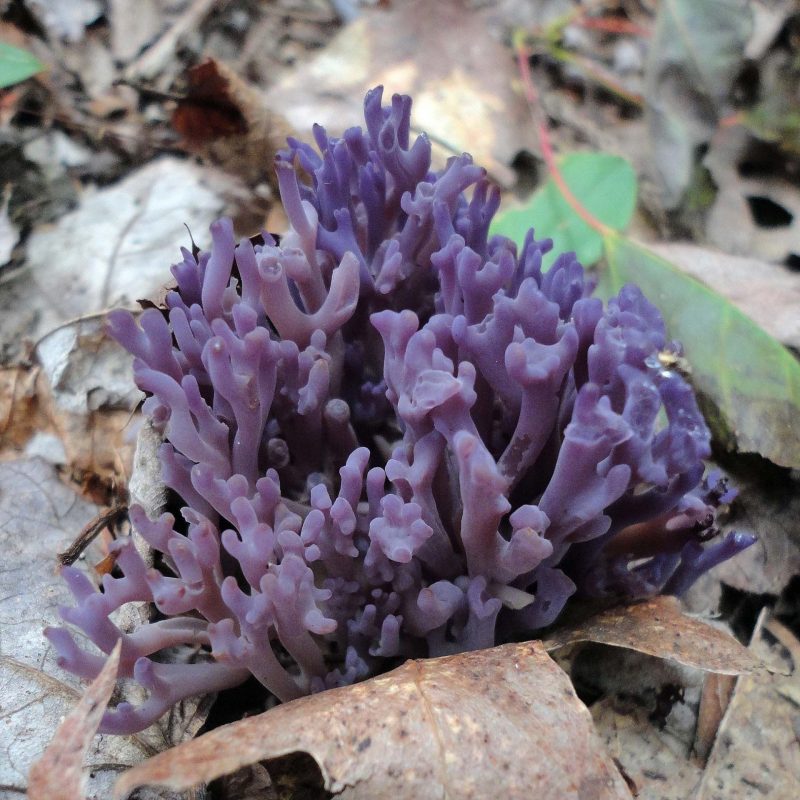 These fruiting bodies are covered with a layer of basidia (spore producing cells) that release spores in hopes they will be carried to a suitable spot for a fungus to grow. Corals come in a spectrum of colors, and along with waxy caps and amanitas (and others) have been adding a lot of color, as well as texture, to coastal and island woods in Maine for the last month.

Spindle-shaped coral (Calvulinopsis fusiformis) is a great example of a boldly colored (yellow), non-branching coral mushroom that is observed yearly, but this September has been observed in huge numbers (comparatively, of course). Every trail, every preserve, every patch of woods I’ve visited this month—in the Camden Hills, St. George, Vinalhaven, and North Haven—has harbored patches of this species. What’s more, mushroom observers from around the state have been sharing spindle-shaped coral sightings with me. Have you seen many spindle-shaped corals in your neck of the woods? More than usual? You’re not alone!

Another coral species that has turned up in numbers is the grey coral (Clavulina cinerea). My guess is that if you went into the woods in Maine anytime in the last two months you crossed paths with this species. Grey coral’s multi-branching fruiting bodies add a form and texture different than the spindle-shaped, while also living up to its common name in color. Their pale-grey-to-almost-fully-black mushrooms can camouflage with the duff and ground cover and in most years can easily go unnoticed.

This year has been bomber for grey coral, however, and once one individual mushroom is spotted in an area, it can be almost like a game spotting all the others scattered nearby. Grey coral grows under conifers and in mixed woods, but seem to take a real liking to some Eastern White Pine, the Maine State tree and flower! Some pines have no grey coral below, while under others the ground may be covered with these darkening corals. I’ve added a few shots of a colony of greys under a white pine on the Huber Trail on Vinalhaven that had an impressive amount of these guys. How many can you find?

Diversity in shape and form of the spore dispersal machines we call mushrooms has been kind of a theme with these columns, and the next two groups are examples of spore dispersal strategies that break the gravity released strategy that most observable mushrooms use.

While monitoring easements on North Haven I crossed paths with a brown cup mushroom (Peziza sp) along a trail. Cup mushrooms have not been especially abundant this summer in my experience, and possibly are an example of a group that don’t respond well to too much water, but I also could be having terrible timing/luck with my cup spotting these days. That’s not the point. The actual point here is that cup mushrooms have a great strategy to increase the potential dispersal range of spores they release.

Cup mushrooms are aptly named as they resemble cups (or bowls or saucers at times) in form. The cups are lined with sac-like spore-producing cells called asci, and it is from these asci that spores are forcibly released into the air. That’s right, while the spores at are the mercy of gravity once released, the force (gravity) itself is not used/taken advantage of in the process of dispersal.

Instead, the mushroom waits and ejects its spores during breezy conditions that would potentially carry its spores greater distances. That on its own is cool, but what makes this even cooler is that when the mushroom ejects the spores it makes a ffft sound and is audible to the human ear.

Even better yet, if an observer mimics wind by blowing over a cup the asci can be triggered into forcibly releasing its spores. This often only works once or twice per cup per visit (come back the next day!) but when it does work a cloud of spores will rise from the cup as the sound is produced.

Take a look the video below from my North Haven visit. The first sound is my breath mimicking wind (I apologize ahead of time for that sound). Listen for the ffft as the cloud of spores (Thousands? Tens of thousands? Gagillions?) rise from the cup. It’s pretty cool.

One of my favorite mushroom spore dispersal strategies is used by stinkhorns, which utilize insects and critters that are attracted to gross smelling things. Stinkhorn spores are contained in fowl smelling goo that is often smeared all over the highest point of an individual mushroom.

The goo must be good (it’s all relative), as flies (and whatnot) are attracted to it, land on it, and eat it while getting it on their feet and legs. When a fly flies off they become the agent of dispersal, as the spore-rich goo on their legs is transported to another suitable spot. I guess you could call it a symbiotic relationship as the fly gets a belly full of spores and the mushroom gets dispersal. Mutualism at its finest, and somewhat grossest (so many judgments in this paragraph).

The summer of mushrooms has swiftly transitioned into the ffall of mushrooms, and the future looks good from here. The fungus that create the corals, the cups, and stinkhorns are all decomposers, busy turning leaves, branches,and duff back into soil. It’s an important and essential niche to fill, and on top of that they create unique and strategic fruiting bodies that entertain in a multisensory (vision, auditory, and olfactory) experience. Man, mushrooms are so cool.