Beaver lodge in the snow
Stories from the Coast >

Nature bummin’ is all about “flow.” Living in the moment (even when you’re looking at the past), one thing leading to another, not putting much thought into strategy or destination. The less thought the better at times. “Gone are the days we stopped to decide where we should go, we just ride,” says Robert Hunter.

November is a tricky month for a free-flowing nature bum. Some call it hunting season, I call it lack-of-flow season. Either way, and out of respect for hunters (and maybe with a touch of survival instinct), I usually limit my time in the woods during this month. With choices and nature observation opportunities limited, the flow of observations can be rickety (at least) and feel downright forced at times. A sighting here, a sighting there—no flow between. And that’s without even mentioning how wearing orange when outside effects sneaking up on critters. Call this the whining of a nature bum—so lame! 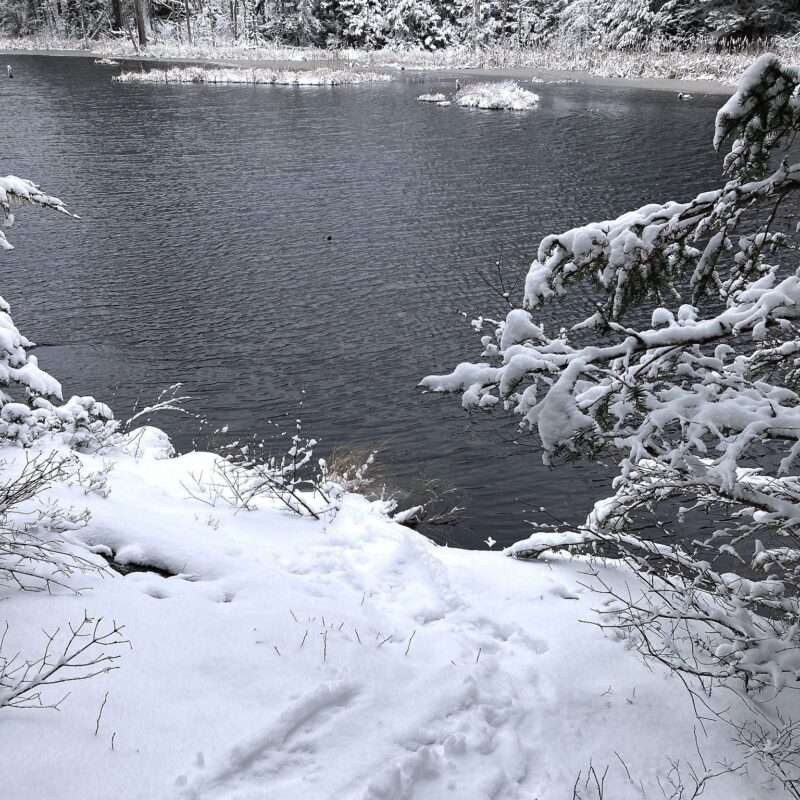 An otter’s belly slide into the water.

But the season is short (there’s always a light at the end of the month) and before you know it, the hunting is over and it’s cool to shed the orange. Some call this time December.

This year, weather and year-end paper work extended the lack-of-flow season a bit. At these times the “gotta get out there” energy starts to build up. So keeping an eye on the weather and filling windy or rainy days with (relatively) productive hours can get a bum ready for a well-deserved outdoor session when the opportunity arises.

With that in mind, a beautifully snowy opportunity finally did call, and on a Sunday no less! When four inches of lovely snow greeted the sunrise I was there to greet them both!

I made my way to the marsh out back and, while there was no ice to walk on (that will come in the new year), the fresh snow views were stunning and the light fluff was a pleasure to walk through. Even the snow slush layer building up on top of the marsh’s waters felt good (to look at). Here we go winter!

As I was appreciating the slush I noticed a break in the layer that looked naturally unnatural. I’ve seen breaks like this while inspecting slushes from years past and it was clear that an animal had become a “slush-breaker” and swam through the area! From shore, I followed the slush path to where it reached land and found tracks and a trail where an otter came out of the chilly waters! First otter tracks of the season, just like that!

My morning was set. I visited a latrine the otter also visited, found belly slides and even saw where beavers had worked on lodge repairs, I’m guessing sometime in the wee hours. Always something to see in every snow. And just like that, Kirky got his groove back—not that it was ever gone, it was just, like, “over there.” 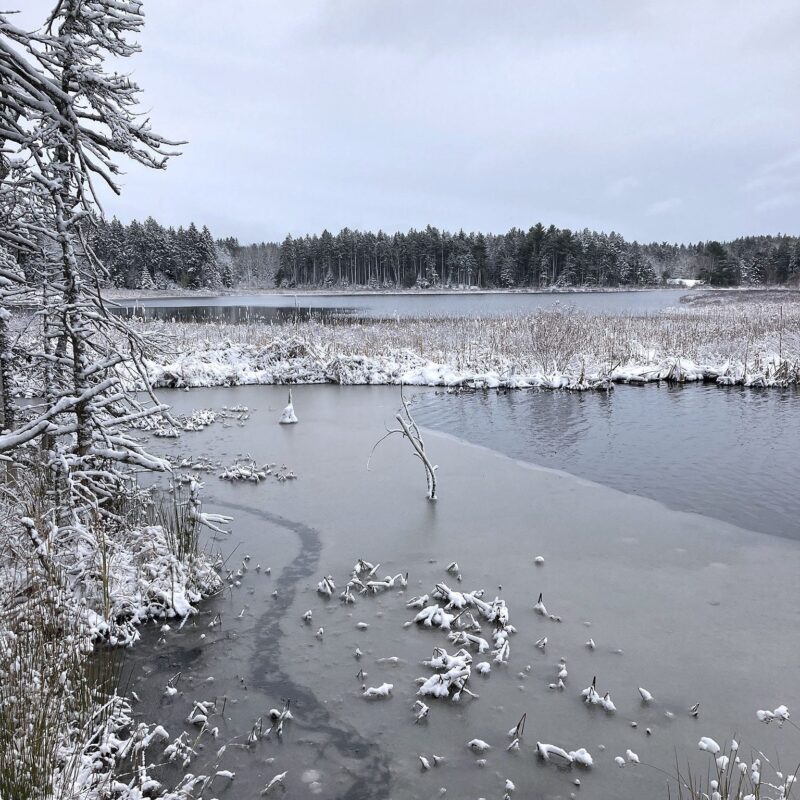 The trail through the slush

Post hunting season connections are essential to get the flow going once again and they are easy, too. All it took was a little snow, an otter doing its thing, and a leaky beaver lodge roof in need of repairs. Felt good. So much so I wrote this poem-like thing.

I think I am at my happiest when walking through the first snow of the season.
The first ‘real’ snow I should say
You know, the one that captures the footprints,
the trails, the clues, & the lessons from the night before.

And so it’s down to the marsh I go
Time to check for otter sign
That’s what got me up hours before sunrise
Anticipation and excitement too thick to sleep through
Rise, sun, rise!

A belly slide at a latrine
A trail through the slush at the water’s surface
And fresh tracks at a spot or two.