December 2019 marked the 120th running of National Audubon Society’s Christmas Bird Count (CBC). This nationwide survey of early wintering birds is broken into small, local counts that are organized as circle grids 15 miles in diameter. Each local count is divided into sections. On a pre-determined day at the end of each year, groups of birders and birdwatchers alike go out with a mission: to count every bird in their assigned section.

With 119 years under its belt, the CBC is billed as the longest running citizen science project. Keeping this legacy and history in mind, when I am invited to participate in a CBC I feel like it’s my duty to do the most thorough and focused job that I can. The “job” being counting birds, of course.

Doing my part in the Christmas Bird Count

When my friend Don asked me to count all the birds in section “d” for the Owls Head Christmas Bird Count, I figured I would do the day right.

Section “d” is an impressive stretch on the St. George peninsula—spanning from Clark Island to the St. George River and north to Highway 1 (pretty much). I had just a single day to do my part to count birds. No time to waste! I certainly didn’t want to let Don down.

With owls on my mind, I made it to the St. George Town Forest Preserve on Kinney Woods Road at about 5 a.m. It was dark, and the ten-degree weather chilled my toes even before I shut the truck off.

The loop trail is a great place to listen for owls and happens to be the most reliable spot in section “d” that I have found to hear both Barred and Great Horneds. It’s so reliable that I would consider leaving the preserve without hearing at least one of the species a disappointment and injustice. Needless to say, there was a Barred Owl in the parking lot, which I heard before seeing it fly away. I walked the loop trail in the dark, listening for Great Horneds, and waiting for daylight to come so I could count the songbirds in the forest.

I was just starting to feel cold when a pair of Barred Owls called back and forth to each other. I presumed one of them to be the owl from the parking area. Suddenly, I wasn’t cold anymore. It’s amazing how an owl call can warm you up! Within minutes local coyotes let loose a series of howls, yips, choruses, calls and responses. Things were really warming up at that point.

The coyotes were the first test in what is always a day of tests and temptations.

Temptations to find the other warm-bloodeds—that is, the mammals. It’s an Owls Head CBC tradition to have a couple of fresh inches of snow on the ground—perfect for tracking mammals and distracting a distractable observer such as myself from watching birds!

On any other day I would have gone straight for the coyote zone—eager to follow trails and see what might be found. But not on a CBC day! I fought the urge to go rogue! I refocused on songbirds (go coyote!). The brown creeper and white-winged crossbills would end up being fine additions to the section “d” totals. I will admit: I am a sucker for creepers.

While surveying the loop, I came across a sizable paper birch tree whose lower section of trunk had been significantly chewed by a beaver.

Upon closer inspection, it appeared that much of the activity had occurred after the snow had stopped the day before.

Rarely do I find signs of beavers in snow—they typically go all den-and sub-ice -aquatic once the cold sets in.

I followed this snowy beaver trail from the chewed tree to an opening in the frozen Jones Creek. Apparently they’re still out and active! On any other day I would have followed my instinct to go and see what I could learn about what the ambitious (I mean, this one took on a huge birch!) local beavers were up to… but no, it was time to go.

Next, I headed over to the Fort Point and spring area to scan the St. George River for ducks. The day’s tally was beginning to resemble what a respectable section “d” tally should look like. And after a couple more stops, I found myself heading for Clark Island to scan the ocean views and to see what the forests there held.

It wasn’t a surprise to find lots of birds at Clark Island—the place is usually hopping. I scanned for sea birds with a spotting scope and got impressive totals of individual birds and overall diversity of species. Fresh snow along the shore, however, captured sign of recent river otter visits to a local latrine. Another classic mammal temptation—and this one I couldn’t fight. 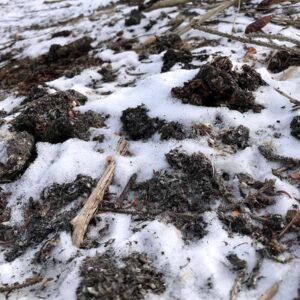 Latrines, or marking areas, are visited regularly by otters and are used as message boards… who’s around, who’s denning—all kinds of info is shared there.

Some latrines on Clark have been used for many years; I’ve known this particular one for five years.

When otters come to latrines they will often stay right in the immediate area. Thus, an observer is able to get a reasonable feel for local otter activity and numbers with a quick check. Otters are easy, or so they say. After a quick check, it was back to birds!

Clark Island also had lots of signs of porcupines that day, mostly in the form of chews on young trees. There were plenty of teeth marks and barkless patches to be seen, all of which beckoned me to look closer. 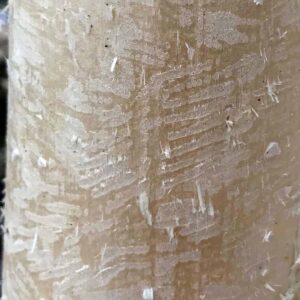 I only examined a few, trying to remain true to the birds and the focus of the day. I didn’t want to miss anything feathered. Seeing a rufted grouse was a good reminder of how anything could pop up at any time and I needed to pay attention. Even though to my knowledge I hadn’t “missed” anything yet, it was still a good reminder.

By the end of the day I had fought off the urge to follow the coyote howl—they were right there! —and even wandered away from a fresh bobcat trail in name of counting birds.  I had given in to the otter, the beaver, and the porcupine, but had kept the distractions to a minimum and completed my avian mission satisfactorily. I was glad to help out and glad to know there will be another snow, and another day for me to follow the bobcat and coyote. Only if that’s what I want to do that day. We’ll see. You never know.