Hermit Thrush
Stories from the Coast >

Animal migration is a wonderful phenomenon to observe.

Be it lobsters, monarchs, or, in this case, birds, watching the comings and goings of animals can bring a lifetime of lessons about the earth’s tilt, weather patterns, and survival in general. We can draw connections between water depths, different countries and hemispheres, and, after a while, the earth starts to feel a little smaller.

Talk about the power of migration.

Fall migration can be difficult to observe…

At times, bird migration can be subtle and tricky to observe. The hundreds (or even thousands) of Saw-whet Owls that pass through midcoast Maine each fall (they’re passing through as I type) may go largely unnoticed by humans except for the random, stressed owls that remain active during daylight hours.

Observing fall (post breeding) songbird migration can be tricky as well, as male songbirds aren’t singing as they do in spring. Instead, some songbirds get shy and stick to the shrubs and thickets, or go high in trees during migration, meaning the average nature observer has to use patience (and maybe even a ladder) to get a good view (how rude!). Top things off with the inundation of recently hatched (and fledged) drab-colored juvenile birds and suddenly mushroom picking can look a whole lot more inviting. 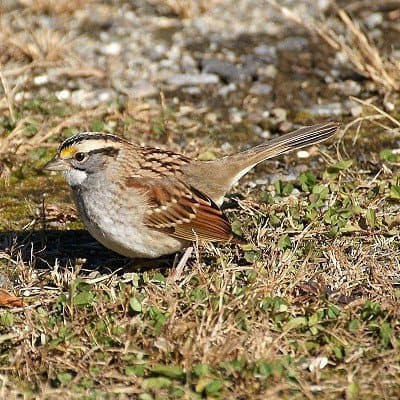 Last week I received an email that went something like, “Have you seen the thousands of little brown birds along the roads?” Indeed, for a while it was impossible not to notice the brown and white birds flashing and flittering away as one’s car approached.

Every fall, groups of songbirds line the St. George roadsides. The birds feast on seeds and insects while following the safety-in-numbers survival strategy—because within a group, word of incoming threats spreads quickly.

Nature observers are no different from any other group. They often use cute, catchy, and sometimes coded phrases to relay a message, sound cool (good luck) and feel included. (“I refuse to join any club that would have me as a member.” – Groucho Marx)

A few local drivers have been referring to the roadside birds as “Kamikaze birds” as they seem to play with death while darting in front of cars, buses, and bikes. Some bird watchers describe these roadside birds as Little Brown Jobs or LBJs. LBJ is a fine acronym for roadside birds that frantically freak out when bikes, cars, dogs, humans approach. 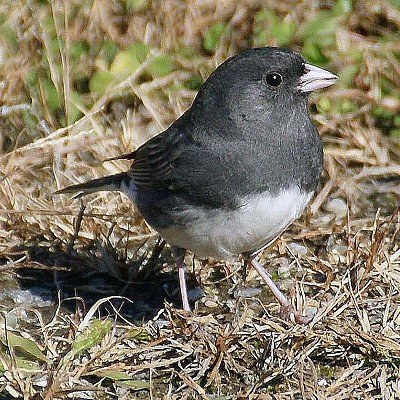 On a recent LBJ-watching excursion, we (the royal we) saw on Watts Avenue Dark-eyed Juncos and White-throated Sparrows. Both are members of the Emberizidae and both species breed in the midcoast, but, given that they were in a group, one can conclude these birds came from farther north, and were simply stopping at our “roadside diner” for a bite to eat before continuing south.

Dark-eyed Junco is easy to identify in flight, as their outer tail feathers (both left and right sides) are white, in stark contrast to their central tail feathers. This pattern is often flashed when Juncos take to the air. 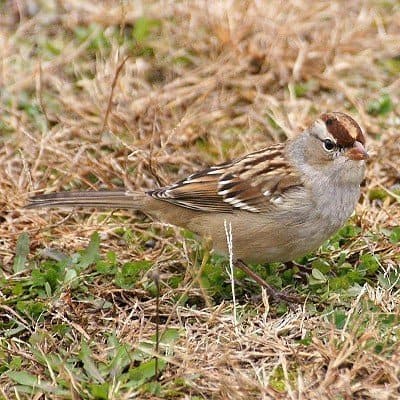 White-crowned Sparrows also made up a healthy part of the LBJ groups in St. George. This species breeds up north, in places like Hudson Bay and Labrador. But, for a few weeks each fall we get to see individuals pass through on their way to wintering grounds in the southern half of the U.S.

Along the coast, most White-crowneds seen in migration are first-year birds (hatched just a few months ago). In this case, white-crowneds can seem like a misnomer as their crowns are red and cream colored. In addition to White-crowneds, I also saw Song, Chipping, Swamp, and Savannah sparrows in the LBJ groups.

Two larger bird species (bigger, brown jobs? BBJs, perhaps?) seen on the roadside this fall were Northern Flicker and Hermit Thrushes. Flickers (the state bird of Alabama!) are a woodpecker that spends a lot of time on the ground eating ants. When they take to flight, the white rump patch at the base of their tail (dorsal side) is easily seen and makes identification just as easy.

Hermit thrushes (the state bird of Vermont!) have been extremely tame this fall, especially those with the roadside groups. Approaching close for great views has been the norm! That has never been the norm!

All in all, I picked out nine species of birds in the St. George roadside LBJ groups, and there were undoubtedly other species that passed through. It was hard not to note the sheer numbers of LBJs. They showed up almost magically overnight and disappeared as quickly as they came.

The power of migration – find it along a roadside near you!