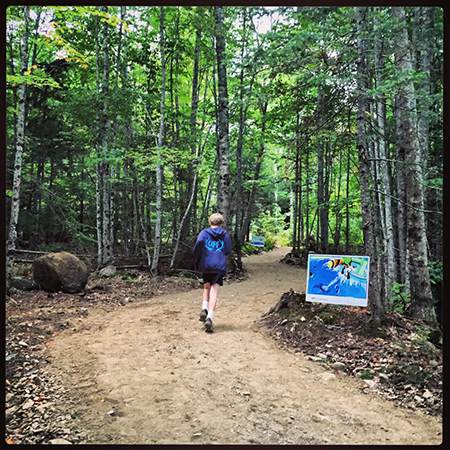 “The Camden Hills offer plentiful options for mountain hikes, but not everyone can tackle those steeper trails,” notes Ron Howard, General Manager of MCHT’s Aldermere Farm. “Whether they’re toddlers, seniors or somewhere in between, many community residents want to enjoy a woods walk with a gentler grade and wider, smoother trail.”

To meet this need, MCHT recently opened its Erickson Fields Wellness Trail, a 1.4-mile loop trail that introduces visitors to more of its 93-acre preserve. The trail crosses a pasture marked by stone walls, and then enters a woodland where wolf trees have grown up from former pasture.

Even before it was completed, neighboring landowners were out enjoying the new trail. Bob and Julie White, whose home abuts the preserve, found themselves—in Bob’s words—“really getting to know this piece of land,” and in the process “becoming bigger and bigger fans of what the whole Trust does.”

Growing more attached to the Preserve, Bob says, prompted them to help out, “trying to be a good neighbor.” Bob built a kiosk for the new trail while Julie, a surgeon at PenBay Health, helped connect MCHT with health programs and organized “Doc Walks” where people could talk with area doctors about the health benefits of exercise. The trail has fitness stations along it for those who want to build in an extra workout.

Word is out about the trail, Bob notes: “you’d be amazed at how many people are using it already.” In the course of half an hour, he’s observed four to five groups arriving—even on a weekday.

There’s already discussion of extending the trail because MCHT just purchased an adjoining 71-acre parcel that eventually could offer a trail leading close to the popular Beech Hill Preserve, an open summit that MCHT helped Coastal Mountains Land Trust protect (with help from the Land for Maine’s Future Program).“The new Erickson Fields Trail and the potential for further connections enhance our common goal of connecting paths into a wider network that provides alternative ways to travel between villages and neighborhoods and benefits everyone,” observes Lynda Clancy, a member of the Camden-Rockport Pathways Committee. “We applaud the Erickson efforts and look forward to walking the new trails.”

Alongside widespread community enthusiasm, there has been generous financial support for the trail from Pen Bay Healthcare, Cordjia, Energy Systems Group, the Jane B. Cook Charitable Trust and the Elmina B. Sewall Foundation.

“Erickson Fields has been best known to date for its 2-acre vegetable gardens which, with the help of an energetic Teen Ag Crew, produce about 15,000 pounds of produce a year,” Ron Howard observes. ”But even though the Preserve is in a high-traffic location near the elementary and high schools, few people noticed it. Now, there’s a steady stream of visitors stopping by to enjoy all that Erickson Fields has to offer.”