Maine people have enjoyed prime snow and ice conditions throughout the state this winter – between shoveling snow, clearing roofs and finding ways to stay warm!  In fact, Maine Coast Heritage Trust has hosted a number of recent events offering a wide variety of ways to embrace the winter season.

In mid-February, nearly two dozen descended on one of MCHT’s newest preserves, the former Kelley Farm in Bass Harbor. MCHT staff and volunteers organized a variety of activities including sledding, snowman making, cross-country skiing, and snowshoeing.  While enjoying homemade cookies, visitors learned about possible future plans at the fledgling preserve. 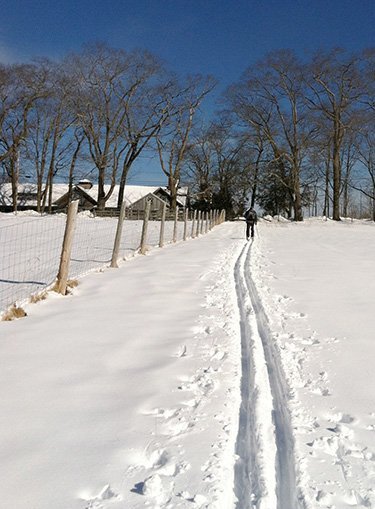 MCHT’s Aldermere Farm preserve in Rockport has also hosted many events this winter. On February 2, more than 40 adventurers withstood the elements for a fabulous evening of cross-country skiing under a full moon. Two weeks later, during the Great Maine Outdoor Weekend, a handful of hearty winter enthusiasts explored the trails and open fields on skis and snowshoes.  In early March, MCHT partnered with the Maine Department of Inland Fisheries and Wildlife to host an ice fishing program from kids. Thirty aspiring anglers made their way to Lily Pond, where they gathered basic information, learned some tips, and even caught a few fish.

While the winter of 2015 has broken many snow and temperature records, those who have ventured to MCHT’s preserves have been treated to spectacular scenery and wonderful company. For others, be patient, spring is just around the corner.