Woodcock
Stories from the Coast >

Years ago (decades at this point—yikes!), I was told that having participants ask questions on a hike is a good thing. A sign of engagement and interest, questions can also be a precursor to fun conversations and good, hearty laughs (the true goal).

Questions I am often asked fall along the lines of: Is that rare/unusual? Is it edible? Will it kill me? I like these questions. Sometimes I am asked, Did you see anything good? I am not a big fan of that one. It’s a question that takes me down an awkward path where I attempt to find out what the questioner means by “good: while trying to convince them to never ask that question. Trust me: it’s uncomfortable for everyone. So pretty please, don’t ask me that one.

The month of March is a transition month (and what a transition it is this year!). It came in like a cold sauna and looks like it’s leaving as a slightly warmer one. Marches like this one, where winter leaves too soon and critters start returning or rising from winter digs, can become the month of the question, Is that early?

It’s a question that I happen to like, but can be a tricky one to answer all the same. There are so many perspectives on what “early” can mean that finding the correct answer often requires a convoluted discussion. Not necessarily a bad thing…

Take American woodcocks for example. A good friend of mine on Vinalhaven reported seeing one on March 2nd and asked, “Is that early for Woodcocks?”

I would love to answer that based on hundreds of years of recorded data, but if that exists I am not privy to it. Should I base an answer on my 16 springs living in Midcoast Maine? That answer would be based on limited data (geologically speaking 16 years doesn’t mean squat) and it also feels egotistical.

I know when the earliest woodcocks have been reported to me over the years, but I would be foolish to think that other woodcocks didn’t pass by earlier, unnoticed and unreported (so did they really exist?).

The fact that I have seen woodcocks in January and February along the Midcoast begs another question… are there some that don’t leave at all? Can you be an early arrival if you never left? You can see how this gets tricky…

March 2nd is the earliest I’ve gotten a report of a Woodcock sighting (March 5th held the record before), so I kept my response to my friend somewhat simple: “It’s the earliest anyone has reported one to me, that’s so cool!”

The lack of snow and softness of the ground this March was perfect for Woodcocks. One might even say it was the right time—habitat-wise—for them to show up. Early and right on time, at the same time. Now that’s a skill. 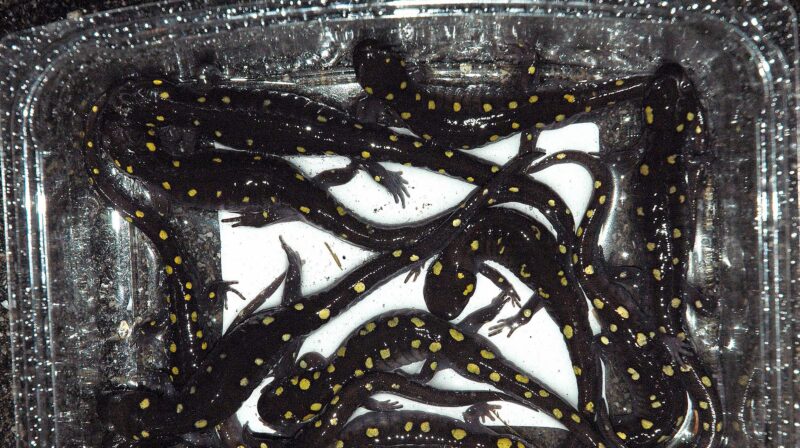 March is often the time for St. George’s wood frogs and spotted salamanders to make their way to vernal pools. If I had to pick a timeframe for a “typical” amphibian migration it would be the last two weeks of the month. Some winters last into May, of course (the winter of 2015 was one of those…). And others may not happen at all (2016). The timing of St. George’s amphibian migration is greatly influenced by local conditions, so typical is a fluid term here.

Rainy and warmish (40 degrees plus) evenings are the required conditions for the local amphibians to move. By late February it was plenty warm enough—which was comparatively early—and after the snow melted it felt as if we just needed a little rain and the amphibians would respond.

But the warm, evening rains didn’t come for a full two weeks. On Friday March 13th amphibian observers took to the streets with visions of frogs hopping and salamanders scurrying to the pools.

To my surprise (and to the surprise of other amphibian cruisers in Midcoast Maine) there was a serious lack of amphibians observed that night. I did find this beautiful (judgment) female Wood Frog making her way across Long Cove Road, and felt kinda lucky as no others were reported.

The animals know what they’re doing 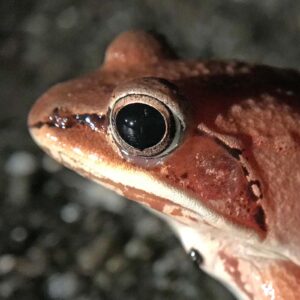 So was she early? Back in 2016 (when there was little to no winter, mind you) major amphibian movement was observed in St. George on March 7th.  So the 13th wasn’t even the earliest in the last five years, but was still earlier than the last two weeks of March. It was the right time to migrate as far as conditions go, and yet she was early compared to other local amphibians and as far as the calendar is concerned. There we go with “on time” and “early” again. But was she really early? I often go back to the default of the animals know what they are doing, which may give them more credit than they deserve.

The next day I found my answer while visiting the vernal pool she was heading to. Not only were no other amphibians seen at the pool, the pool itself was covered in ice. Not just a thin layer of ice, either. It was ice that supported both me and my mass!

Maybe it was the right time for her to migrate, but there was no access to her vernal pool. So in this case the answer is a firm yes she was early as far as the vernal pool was concerned.

After re-reading this column I can see that it doesn’t really clear up any confusion about things being “early,” but I’m not sure if that was the point (is there a point?). Late, early, on time – they all have different meanings depending on perspective. One thing that is clear is that it’s all good. And things are getting busy outside – catch a peek and enjoy! It’s always a good time to get out there looking.