A Blue Dasher female perched on spruce
Stories from the Coast >

It’s been hot lately. Too hot for a lot of things. I paid a visit to the Town Forest Loop and the slime molds had gone to spore, the mushrooms were dried and shriveled, and I was covered in sweat.

There was little inspiration for a nature-bummin’ column on that trail that day. More perspiring than inspiring. It wasn’t too hot for mosquitoes though, which was a shame. Good day to be a cold-blooded predator, tough day to be prey.

The best of the predatory insects: dragonflies 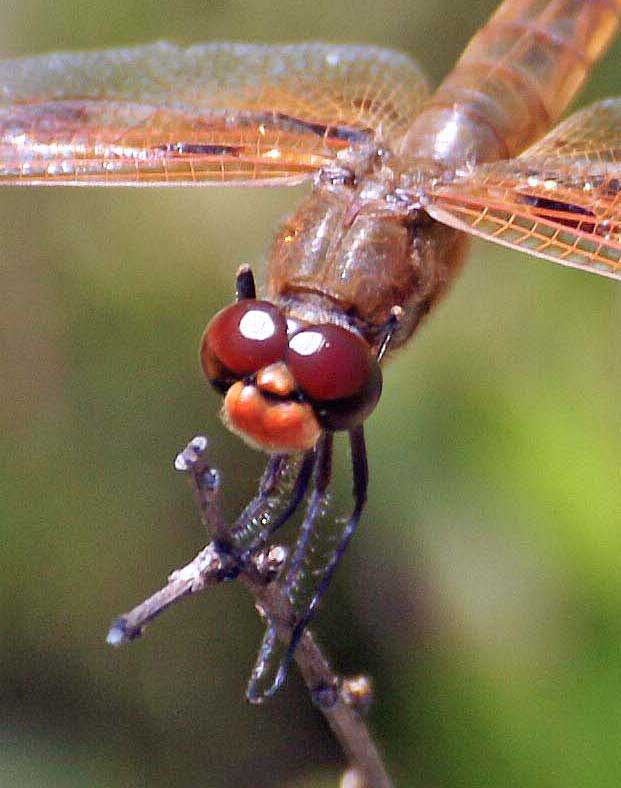 When talking predatory insects, most will jump straight to the Insect Order of Odonata–specifically the dragonflies (sub-order Anisoptera). Not only are they fast, cool looking, and amazing fliers, but dragonflies are a major predator of mosquitoes, both in the aerial and sub-aquatic arenas. What’s not to love!?

Ponds, lakes, and streams are for mating

When you find dragonflies at ponds, lakes or streams, eating is not their number one priority.

Here, dragonflies are often amped up, ready to breed. You’ll find male dragonflies aggressively patrolling, defending, and chasing anything that enters their eternally morphing patch of habitat. It’s a mating game that makes you appreciate that you are not a female dragonfly. (Not an uncommon thought when observing nature.)

Found away from water, dragonflies are probably on the hunt

Go any distance away from water, however, and you are bound to cross paths with dragonflies “on the hunt.” Some will hunt on the wing, flying in (somewhat) of a grid pattern that would probably make Fibonacci proud.

In between hunts, and sometimes while performing the classic “hunting while resting” maneuver, dragonflies will perch on shrubs, posts, and the random dead twig or branch. It’s a relatively chill scene, where males and females of the same species can perch peacefully near each other.

At certain times—maybe when they are digesting or just “too darned hot!”—even dragonflies become docile. As someone who likes to document observations through photography, these times are greatly appreciated. 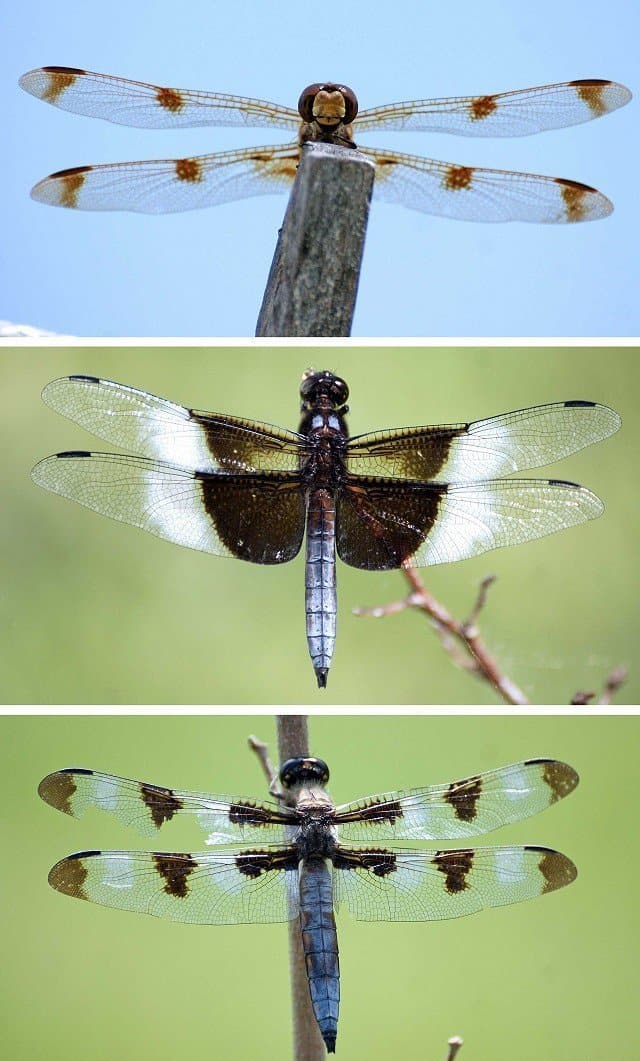 With the heat, adventurers have stayed close to my “clubhouse” work area and, more specifically, the fan that’s always spinning.

A male Widow Skimmer (Libellula luctuosa) spent a morning hunting from Highbush Blueberry twigs, and both Spangled (L. cyanea) and Slaty Skimmers (L. incesta) have been perching daily on the butterfly bush.

Twelve-spotted Skimmers (L. pulchella) have been using posts and the (few) dead, planted trees in my backyard to rest, hunt, and pose I suppose! Painted Skimmers (L. semifasciata) have even taken to landing on wooden clothespins! Have I mentioned how much I like the genus Libellula?

Recently I’ve developed an appreciation for female Blue Dashers (Pachydiplax longipennis). Sounds a little creepy I know, especially with that species name, but I’ve been observing male Blue Dashers “playing the game” at ponds for years.

They are a very common (and wonderful!) sight. Glimpses of female Blue Dasher at ponds are quite the opposite experience–rare and fleeting (while still being wonderful). This year, however, a couple of female Blue Dashers have (apparently) decided the clothesline just outside the clubhouse is the perfect perch.

Time for a close-up 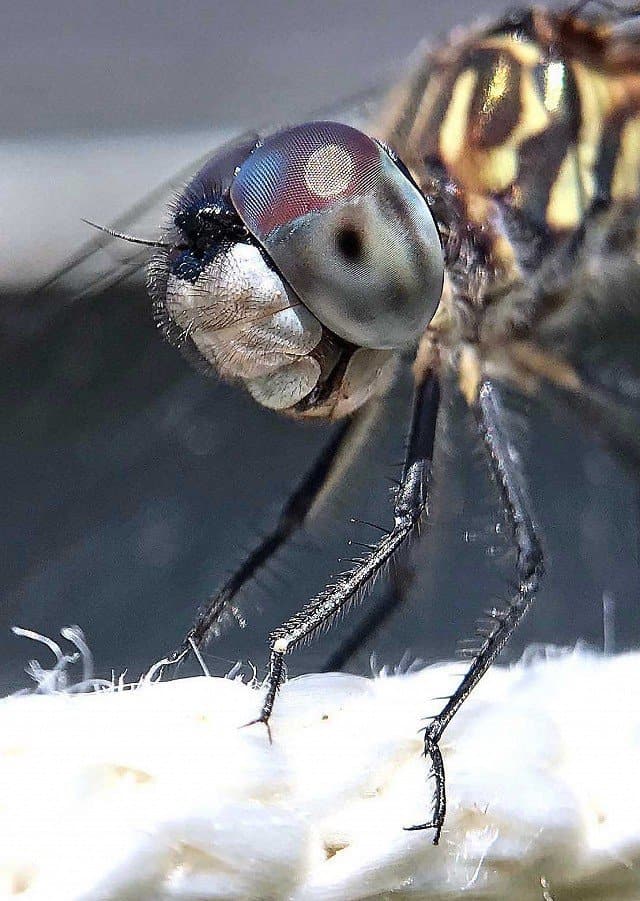 One afternoon, the female Blue Dashers allowed me to use my “newest tool” to closely pick up physical characteristics, as well as their intrinsic beauty. In other words, two of them let me get close with my macro lens. Closer than I would have ever imagined and haven’t come anywhere that close since. The resulting photos did not disappoint.

The spikey dragonfly legs are funky for sure, but it’s the compact eyes in the photos that slay me. A complex form—right up there with bee eyes!—dragonfly eyes are made up of thousands of elements known as facets or ommatidia.

Within each ommatidia, light sensitive proteins known as opsin can be found. Color vision in human eyes depends on the use of three different opsin in our retinas.

Dragonflies benefit from four or five of the proteins in each of the ommatidia. Apparently, this allows for vision on a spectrum well beyond the scope of human eyes, including tapping into the world of ultra-violet, which undoubtedly helps when hunting.

Heck, if the heat can slow a dragonfly enough for an incredible view or two then maybe I could even change my perspective about summer days. Ha! Now I’m talking hogwash!