Conservationist & Educator Honored for a Lifetime of Achievements 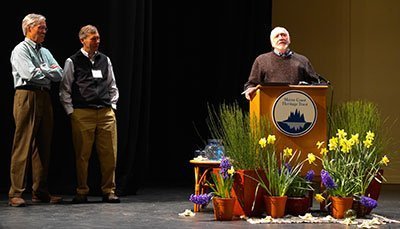 Maine Coast Heritage Trust (MCHT) has named Dr. Owen Grumbling as recipient of the 2015 Espy Land Heritage Award. Each year MCHT presents the award to an individual, organization, or coalition for exemplary conservation efforts in Maine.

“Owen’s commitment to Maine’s environment, and his passion for educating others about the many benefits of permanent land protection make him an ideal recipient for this prestigious award,” said Tim Glidden, President of MCHT, when presenting the award at the Maine Land Conservation Conference this past weekend in Topsham. “For more than 30 years he has created a legacy in the town of Wells, and his work has inspired citizens throughout Maine and the country to get involved with environmental education and conservation.”

“The real reward all of us receive for our conservation work takes place when we visit a parcel, enjoy its beauty, and realize that its health and integrity will be there for animals and for people long into the future,” said Dr. Grumbling upon receiving the award.

Owen was one of the founders of the Wells Natural Estuarine Research Reserve that is nationally recognized for spreading knowledge of coasts and estuaries, engaging people in environmental learning, and involving communities in conservation. He has served as Chair of the Town of Wells’ conservation commission for an astounding 33 consecutive years. In addition, Dr. Grumbling led the charge for the creation of a town land bank that has received over $1,000,000 since it was created in 1984.

Since 1976 Dr. Grumbling has been a professor at the University of New England, eventually helping to found UNE’s Environmental Studies Department, and leading it for ten years. As a professor of environmental literature and land conservation, he teaches a wide range of students who go on to varied careers. As they fan out across Maine and the country, they take with them a land ethic and an interest in conservation policy that will carry on his legacy for generations to come. In 2009, Dr. Grumbling was recognized by New England Environmental Protection Agency for “Lifetime Achievement on Behalf of the Environment and Human Health.”

In honoring past President Jay Espy, the board of Directors at MCHT created a fund that awards $5,000 per year – with the winner able to direct the funds to the conservation charity of their choice.  Dr. Grumbling has chosen to direct his cash award to the Town of Wells Land Bank that is funded by vote of the people of Wells, and by donations such as this one.