Crab tree spider on ox-eye daisy
Stories from the Coast >

Over the last few years we’ve let the backyard “go to meadow” to a certain extent. The basic goal was less lawn to mow, and we found the quickest way to achieve said goal was to stop mowing.

With that, the view out back has been filling up, section by section, with grasses and other fieldy-looking plants. This move has increased my quality of life by at least one-fold, and maybe even upwards of three.

We cut and maintain wide paths through the meadows, and so a leisurely stroll to the marsh is now a grassland adventure (sorta, kinda). The meadow’s wildlife are mostly insects and completely entertaining.

Dragonflies pick off deer flies, butterflies take their intensely comical battles into the air, and hummingbird moths zip around the yard in crazy and unexpected ways. Spring and summer in the yard are almost as cool as winter. And I don’t mean literally cool, though I wish at times it was true.

For June, wildlife activity in the fields largely centers on flowers. By now I have been on record numerous times saying that flowers just don’t do it for me. They are fine for sure, and the spectrum of pistil and stigma pollination strategies can be remarkable. Who doesn’t love a good fruit, am I right? 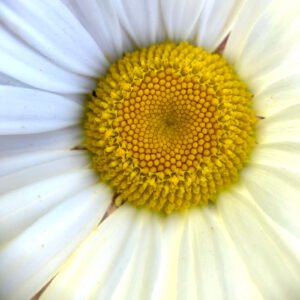 More than cute (or pretty)

The bottom line is that I don’t trust anything that can be, and often is, appreciated purely on appearance. Its okay to be cute or pretty, but there has to be more to keep my interest. Cute don’t cut it. And with flowers, as with cute birds, mammals, and humanoids, it turns out there often is more. I’m proud to say that my attitude towards flowers has become more favorable over the years.

Take the case of ox-eye daisy (Leucanthemum vulgare) in the yard as an example. I hadn’t thought of them as anything other than a roadside invasive before. The daisies themselves are fine (once again) and certainly pleasing to look at. But a close look at the flowers, as with all asters, is something else. I am sure the aster floral arrangement represents ole’ Leonardo Bonacci’s mathematical sequence (not that I can remember it).

“It’s not just the bloom, it’s what the bloom attracts,” said the exceedingly handsome bald naturalist. It turns out that what I like about the daisies are the critters associated with them.

I’ve been checking out the backyard daisies for a couple of years now, and from my biased perspective the coolest thing about them are the crab spiders that use the blooms to hunt. The red-spotted crab spider (Misumena vatia), also known as the flower spider, is the species that has taken up residence in our (the royal “our”) meadow.

What makes crab spiders so cool

Crab spiders (Family Thomisidae) earn their common name from their habit of holding their legs outstretched to the sides, similar to the crustacean crab in both look and movement. The spiders are able to change the color of their abdomen and cephlophorax to match whatever flower they hunt from. When hunting from goldenrod, individuals are yellow; when hunting from the ox-eyed daisy, spiders in our yard are white. How cool is that? 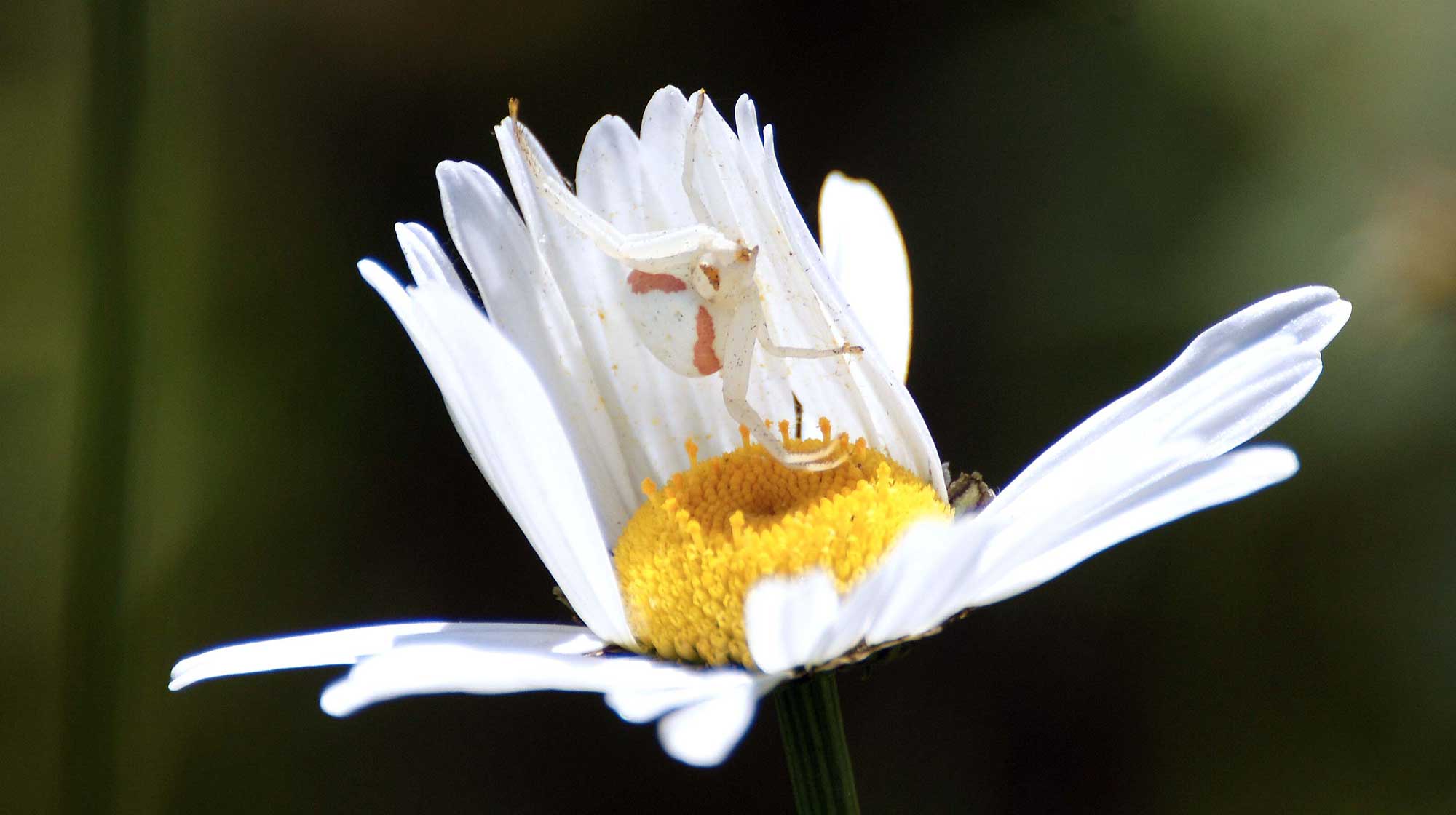 The red-spotted crab spider (also known as the flower spider) changes color based on what plant it’s hunting from.

As with any observable event or species, we learn from past observations and our observational focus develops and morphs accordingly over time. It has become tradition—going on four years now—to find the crab spiders on the daisies in the yard and check in on them.

This June, the focus of crab spider watching in the meadow was hunting behavior, with multiple spiders using the ox-eye daisies as hunting platforms. Any field guide will tell you that crab spiders don’t make webs. They do, however, use this tool in a most constructive way.

One day a female crab spider looked to be chewing on daisy pedals. It turned out she was not eating but instead was bending pedals perpendicular to the aster flowers in the heart of the bloom. Over the course of a few days she had bent half the white pedals on the daisy, using her webbing to connect the petals to create a wall  from which she could hunt from. By building the wall she had essentially reduced any flower visitor’s landing options by half. Less space equals easier hunting, so it looked potentially ingenious.

Harris’s checkerspot butterflies and the takedown

My other hope for the meadow this June (other than checking in with the crab spiders) was to take pictures of Harris’s checkerspot butterflies. They can be numerous in the yard but are often flighty – not good photography subjects at all.

After bailing on checkerspot photos one day I went to the female crab spider to find she had a Harris’s checkerspot in her clutches! The wall had worked! I watched as she spun the seemingly paralyzed checkerspot to get better access to its abdomen. I didn’t stay long, but when I left the checkerspot had two spider fangs in it. Circle of life and all that. 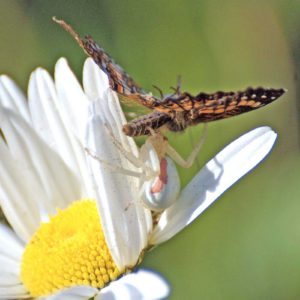 The next morning, all that was left below the daisy were the butterfly’s wings, thorax, and head.  This Lepioda wasn’t hung and mummified for later. Instead, its abdomen was completely gone, and the crab spider was back at her wall perch, back to the grind.

So yeah I like flowers I guess. But I like them more for what they attract rather than for aesthetics.

I often say, “Whatever gets you out there.” And if that means watching crab spiders then I’m totally fine with it. What a treat. And all I had to do was stop mowing!