Kirk's son Leif pumped to explore
Stories from the Coast >

When the going gets hot, some go to the beach (where they fry). Others opt to find a nice, shallow creek to enjoy instead, especially those who saw Jaws at too early an age. I fall into the latter category.

Creeks are ripe for learning and exploring, but so is the getting there. The creek may be the destination, but the entire outing is the experience. And I learned a long time ago that a creek walk just isn’t the same without kids. With that in mind, I grabbed two of my favorite 11-year-old explorers and headed over to Jones Creek in St George. Let the creek walking begin! 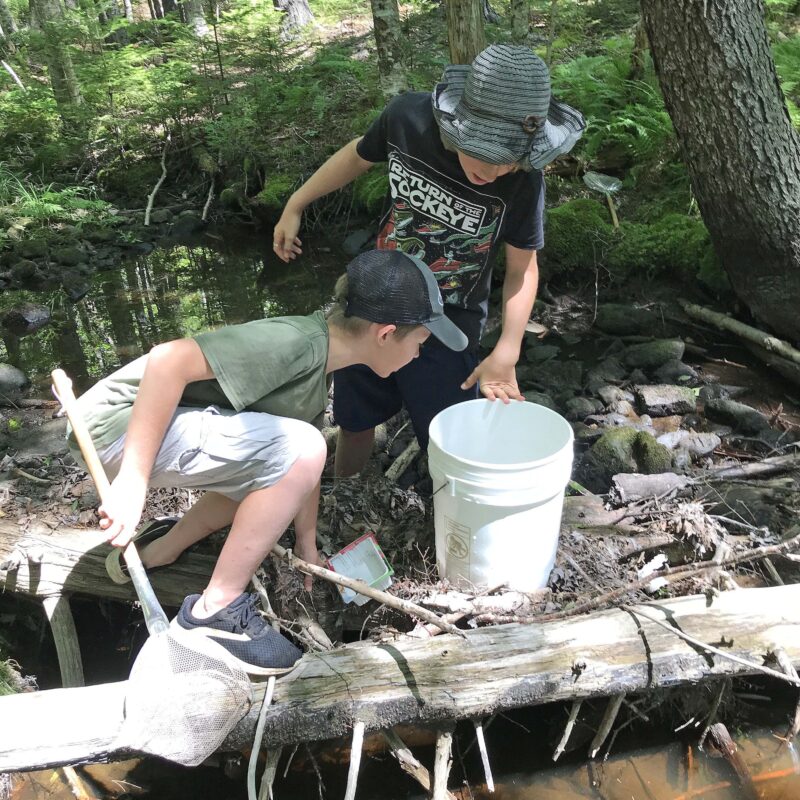 The walk from the car to the creek was eventful. There were plenty of Amanita mushrooms along the trail, with the blusher (A. rubescens) and yellow patches (A. flavoconia) being in particularly high numbers. Cool-looking shelf mushrooms like red-belted conk (Fomitopsis pinicola) and tinder conk (Fomes fomentarius) were spotted, too. The search was on for anything and everything we could find.

We approached the creek gingerly and still sent many frogs-a-flyin’. The sound ker-plunk was heard often on this creek walk, as green frogs (Rana clamitans) leapt from mossy rocks and ledges into the small pools.

Their survival instincts inspired literal leaps of faith at the sight of the three giants (us). In the end they weren’t escaping as much as giving us clues to their presence and location. It was a banner day, with seven green frogs caught out of the 20 or more we saw. (This happens to be the unofficial world record for green frogs caught in Jones Creek on a Wednesday in August. The previous record was five, set by us last year. But I digress…)

The frogs kept us going (and laughing) but our eyes and focus were all over the place. We started seeing all kinds of stuff! 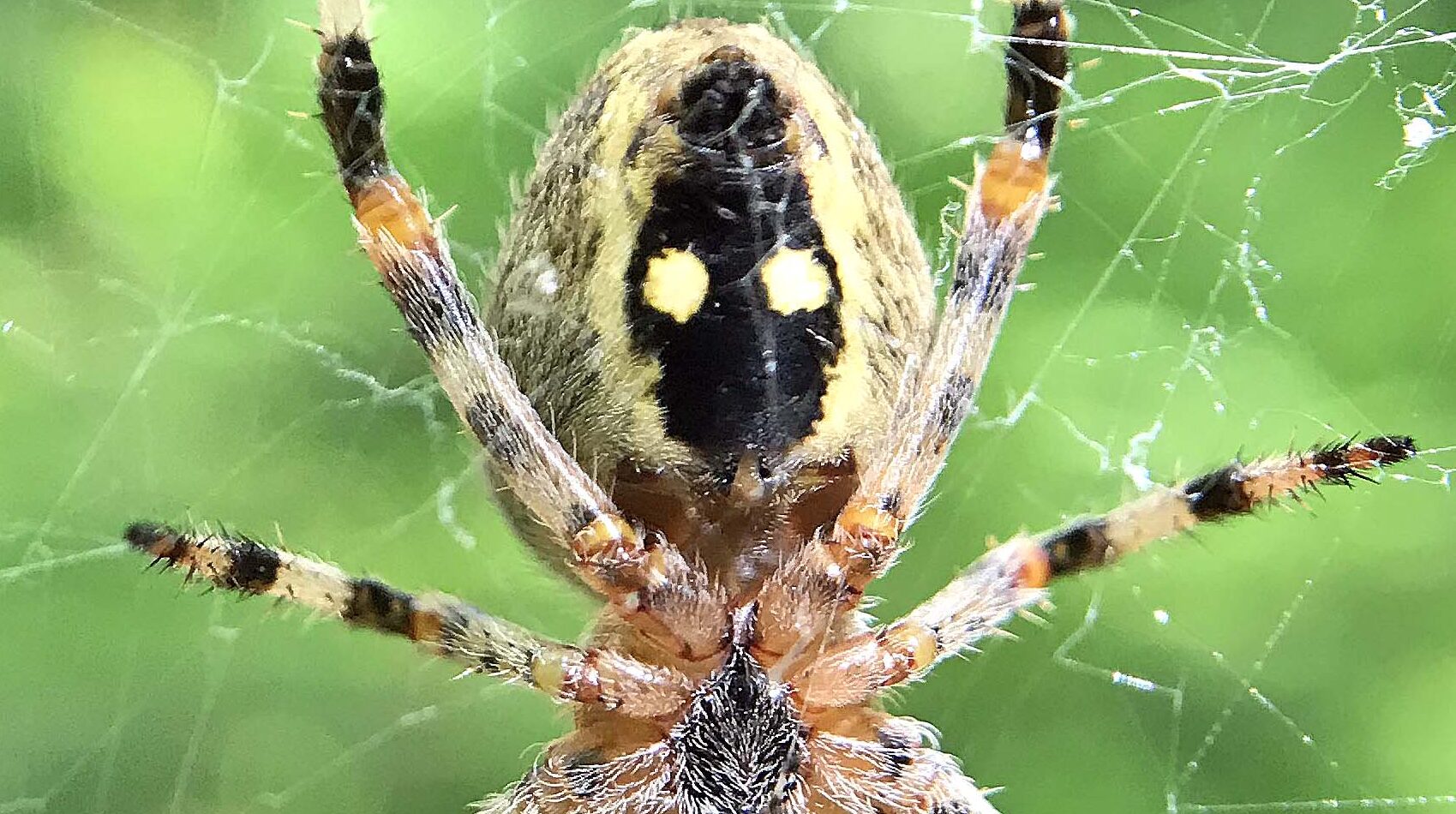 The “Jawa spider” found (and named) by Leif

I spotted a mini-Godzilla in the moss during a scan for frogs, and when Leif called out, “Jawa spider!” we came running. Funny to observe a spider—Agryope, I believe—from below. The big yellow “eyes” on its dark abdomen were totally Jawa-ish. We checked it out for a while and it never moved at all—I’m not sure if it could see us. Glad I’m not a fly, but I have been wondering how the spiders are faring with noticeably fewer mosquitoes in the Midcoast this spring/summer. I kind of wanted to feed the spider, but we had a creek to walk!

The frogs weren’t the only amphibians using the creek. Two-lined salamanders (Eurycea bislineata) were easy to find and present in numbers in the shallow stretches between the pools that made up Jones Creek on that particular day. Juveniles—with clearly visible, external gills—seemed to be sitting and waiting on the bottom. Waiting for food to pass by? Or for their gills to be reabsorbed? Or for freedom maybe? Freedom from the creek which they will eventually leave, but never really go too far from? It was hard to tell from our angle what they were waiting for, but they sure were patient.

Two-lineds are the most widespread and numerous of the three brook salamanders found in Maine, along with the dusky (Desmognathus fuscus) and spring (Gyrinophilus porphyriticus) salamanders. But regardless of their range and status, I don’t see them unless I am at a creek, and Jones Creek is where I see them most.  These days no creek walk is complete without them.

The return walk up creek was relaxing and less focused as we discussed highlights and tallies from the day. Eyes and ears are still open of course, and the pileated woodpecker cries were heard as we maneuvered tricky crossings and slippery rocks. Leif spotted some Chaga (Inonotus obliquus) on a birch and was happy to note its location for future adventures along the creek. We shall return!

Finding a log partially covered in chocolate-tube slime mold (Stemonitis splendens) rounded out the stroll and brought our “Kingdom List” to four, depending on how your count your Myxomycetes (slime molds). 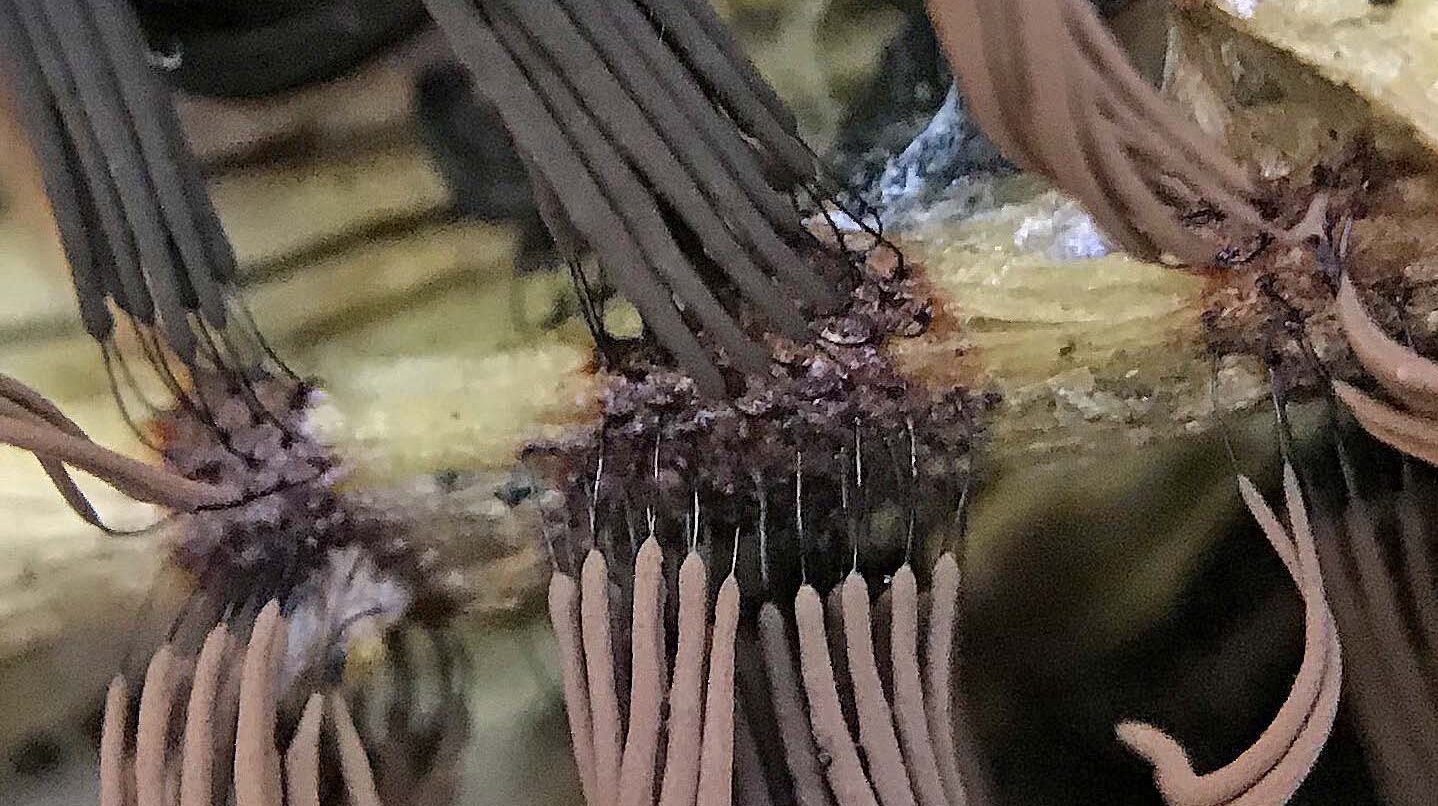 When you spend time in and out of a creek, with two good buddies who have their eyes open and nets ready, the potentials are endless. ‘Til next time, Jones Creek!