Conserving a Trail One Step at a Time

Linking the town of Rockport to the top of Beech Hill

It can take several decades to piece together natural lands that connect neighborhoods, schools, and the larger community. Such was the case with the creation of Beech Hill Preserve, Erickson Fields Preserve, and the soon-to-be-completed trail linking these popular preserves. These efforts began three and half decades ago, shaped by Maine Coast Heritage Trust, Coastal Mountains Land Trust, and many partners. 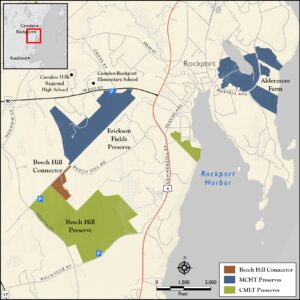 Click on the map for a printable, full-size version

For nearly 50 years, the Cutting family owned Beech Hill, one of Rockport’s most prominent natural features. It faced intense development pressure in 1986 when the family needed to sell. A potential conservation buyer was interested but had multiple goals, including preserving its blueberry fields and keeping intact Beech Nut (the historic, sod-roofed summit building featured on the town seal). The Cuttings approached MCHT for guidance.

By year’s end, the Stetson family had purchased Beech Hill and the iconic property was permanently protected with a voluntary agreement significantly limiting development (a conservation easement). MCHT then joined with community members to help establish Coastal Mountains Land Trust (CMLT) who took over as the easement holder to ensure the long-term protection of Rockport’s newest conservation area. A partnership was born.

The view from the sod-roofed Beech Nut building at the top of Beech Hill Preserve.

The two partners found themselves at Beech Hill again in the early 2000s. After owning the property for more than a decade, the Stetsons wanted to guarantee public access to its breathtaking vista of the Camden Hills and Penobscot Bay. MCHT and CMLT led a joint fundraising effort, building support from businesses, residents, and the state’s Land for Maine’s Future Program (LMF). In 2000 and 2001, MCHT purchased the property in two different transactions and, after securing funding from LMF in 2003, MCHT transferred the property to CMLT. CMLT has managed the 295-acre preserve ever since, and MCHT retains an easement on the property.

With the scenic summit protected from development and publicly accessible, Rockport conservation efforts turned elsewhere. Five years later, an old dairy farm northeast of Beech Hill became threatened with conversion to development. Familiar partners and a few new ones joined together. MCHT, with financial support from Maine Farmland Trust (MFT), acquired the 93-acre property, naming it Erickson Fields Preserve in honor of the family that farmed it for decades.

People at work in the expansive gardens at Erickson Fields Preserve

Next, with support from the local hospital and others, MCHT developed a 1.3-mile wellness trail and, in 2015, Erickson Fields became a destination for folks interested in enhancing their health through outdoor exercise.

As these community treasures grew more popular, a Joint Pathways Committee of the towns of Camden and Rockport began to develop a regional vision of walkable trails, connecting conserved lands, downtowns, and neighborhoods.

This movement supported the latest development in the Beech Hill-Erickson Farm story as MCHT and CMLT worked to protect parcels between the original acquisitions. In 2019, a permanent link between the two properties formed.

In the coming months and years, CMLT will work to complete the trail connecting the two properties. We’ll let you know when it’s ready for the public! In the meantime, MCHT’s Public Policy Manager Jeff Romano took the trek with his son, Anthony, and you can read about their springtime adventure.