“I already hiked those trails this year.”

That one’s of my top five favorite things said to me while in the woods. A few years ago, I heard this from a hiker at the Huber Preserve on Vinalhaven. He had just asked me for advice on other places to hike while he was on the island and his response, the quote above, made me chuckle.

Was he expecting there to be so many island trails that he’d never repeat one? I asked if he ever hiked loop trails in the opposite direction. “Counter-clockwise can make a whole new trail,” I said. I also tossed out that maybe one day he could just look to the right when hiking a trail, and the next time, he could look to the left.

It was clear from the look he gave me that he didn’t know what to make of my answer. To be clear, I was completely serious—those are two fairly good ideas for off the top of my head! We weren’t getting each other just then—same trail, different planets. I still appreciate him. It’s always great to see people on the trails. As I’m known to say, whatever gets you out there!

It’s part of the job

To be fair, a good chunk of my job as a regional steward for Maine Coast Heritage Trust is making repeat visits to preserve trails that I maintain.

Some trails require more visits than others, and certain projects in certain years have me on certain trails quite a lot. Prior to my being anointed “steward” with MCHT I worked environmental education and ecotourism gigs where leading hikes a handful of times (or more) on one trail in a month was reality.

One day Haines, Alaska I lead three hikes on the Battery Point Trail! I was a little confused by the end. Anyway, I’ve been programmed or brainwashed into liking hiking the same trails over and over again.

As an observer, the forced discipline of compulsory trail visits puts weekly, if not daily, changes right at the tip of your toes. The learning is never far, and in fact, it’s trail-side on every walk!

Knee deep into my fourteenth year as an MCHT steward, I’ve enjoyed watching forest regrowth in blow down areas, the “death” of an old school red-belted conk that helped with the decomposition of an monstrous Eastern White Pine, and even the mushrooms fruiting on (and therefore decomposing) my bridges, letting me know it’s getting closer to replacement time. (Alright! I hear you!).

The changes aren’t limitless, but there are a lot of them! And Calderwood Island Preserve, off the little thoroughfare in North Haven, has changed like no other.

Changes at Calderwood over time

When I was introduced to Calderwood back in 2007 it was a common juniper (Juniperus communis) island sprinkled with patches of spruce and fir forest. I mean seriously, the ground was covered in old growth juniper so thick it required chainsaws and bad attitudes to keep the trail system open. The juniper was both painful to work with and unpleasant to hike through, turning the trails into catacomb mazes lined with needles.

Around this time, I was made aware of MCHT’s desire to torch sections of the juniper ground cover to return open spaces to the grasslands that had been there historically (like, back in the 1950s or something). With the help of the Maine State Forestry Service and my co-worker Amanda Devine, we launched three prescribed burns to tackle the juniper—one in 2011 and two in 2014. Needless to say, those were probably the three coolest days of work I have had, and ever will have.

And while the burns were fun (die, juniper, die!) watching the life return to these charbroiled zones has been even more entertaining.

There is a red oak on Calderwood that stands out above the rest. I call it “Grandma Oak” but that’s only because I am not very creative. Anyway, it’s one of those kinds of trees… big, by itself. The kind of tree people get married beneath, because of the shade it provides.

Return of the prey

It’s also the kind of tree that I look for owl pellets underneath. With so many branches, it looks like the perfect tree for an owl to hunt from, happily digest on, and maybe cozy up in for a nap. There should have been piles of pellets underneath—undigested and regurgitated prey remains—but for the first five years of visits I found none.

And then we burned and the pellets started showing up! Great horned owl pellets, no less! Apparently, owls have an easier time hunting in grasses than through the thick juniper. There were predators before the burns—signs of mink were everywhere.

Being a Mustelid (weasels), mink would have had no problem following and hunting on the rodent paths under the Juniper. The mink are still on island—there’s plenty of juniper for them to hunt under, I promise! As a bonus of the burn, the owl pellets signaled the island was now open for business, and all predators are welcome on Calderwood!

Return of the butterflies 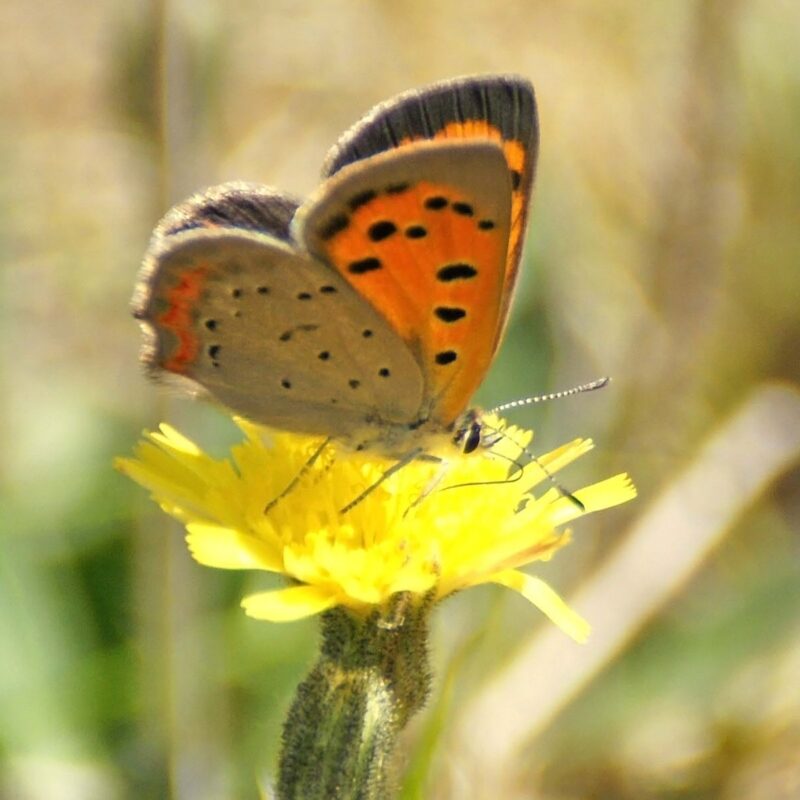 As the grasses have taken over the recently crispy areas, the island’s butterfly populations have increased greatly, at least from this nature bum’s perspective. As you walk (or work) the trails, both Atlantis fritillary and Northern Crescent butterflies flash orange above the green grasses. Tiny and numerous are the fast-flying skipper butterflies. The large tiger swallowtails are plentiful enough—especially this year!—to make me thankful they are not aggressive towards humans. When butterflies attack!

My favorites Calderwood butterfly though (here we go playing favorites again…) is the American copper (L.ycaena phlaeas). The American is a fine representative of the butterfly family Lycanidae, which they share with blues, hairstreaks, the harvester, and other coppers.

Fairly small, but less frantic and frenetic than other butterflies, American coppers add a calm and controlled orange to the scene while sunning, sipping nectar from daisies and buttercups or just flittering about (so many judgments in that sentence).  Maybe I’m partial because they were featured as a cover butterfly on the original Butterflies Through Binoculars field guide (quite an honor for a Gossamer-wing)! Or maybe it’s because Calderwood is the only place I regularly see them, but they are special enough to me to invoke a sigh of contentedness every time I see them.

I start anticipating the coppers before I even get to the boat launch, and now that the grasses are established there seems to be no shortage of them on the trails. Calderwood truly is an American copper island and a summer visit isn’t complete without seeing them.

One section of the spruce/fir maritime forest on Calderwood is blowing down. This looks to be the next drastic change event on island, surrounded by the subtle changes that constantly occur of course. And while trees dropping across the trails can be a pain, the decomposing trees are offering another clean slate, and another area to enjoy watching the changes, even if it going take some years. Looking forward to seeing what’s next!