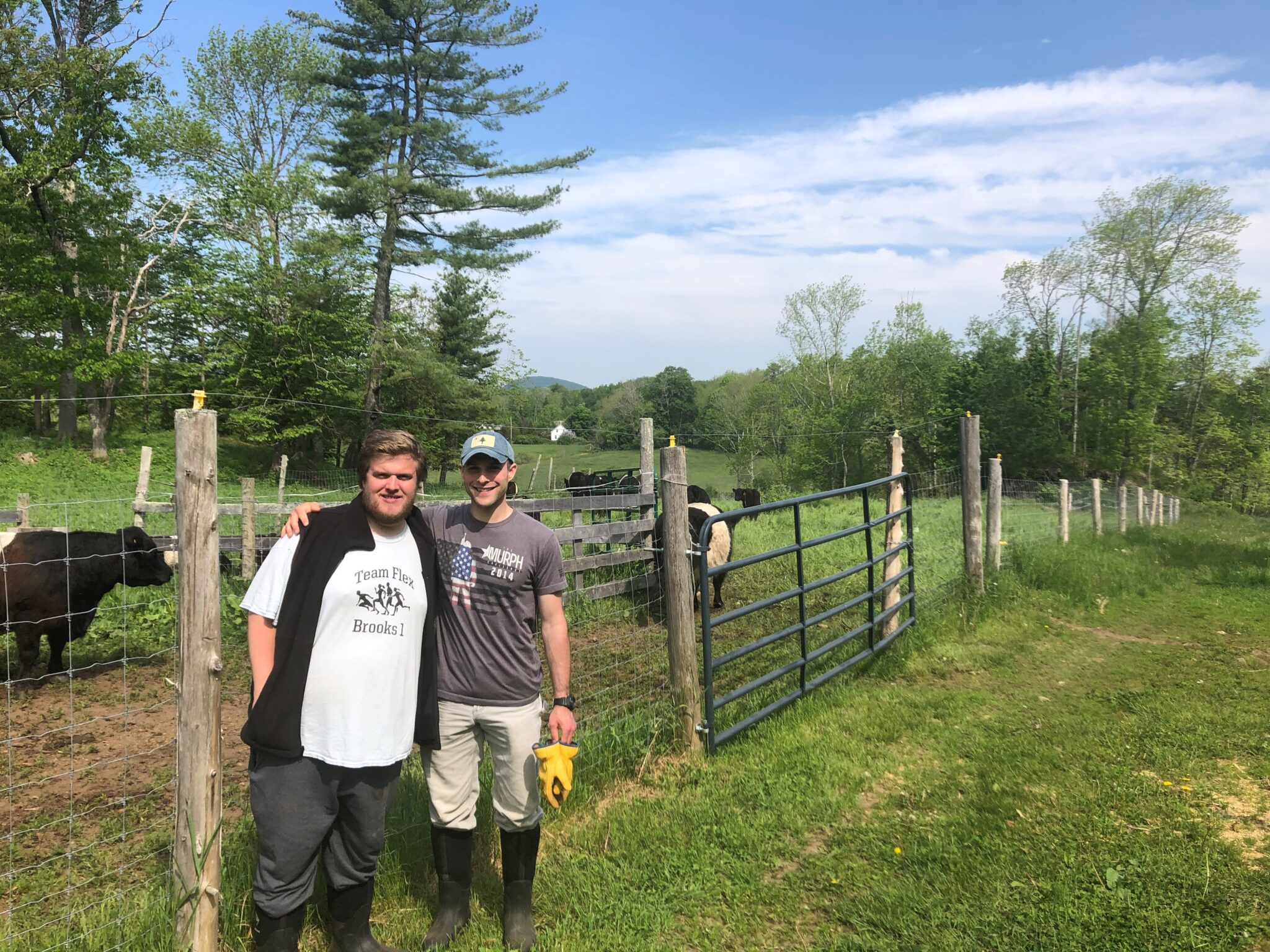 Brothers Michael (left) and Matthew (right) Heath participated in the first session of Big Farm Hands for adult volunteers.
Stories from the Coast >

Last winter, brothers Matthew and Michael Heath were looking to do some volunteer work together. The Heaths have lived in the Camden area for most of their lives and were familiar with Maine Coast Heritage Trust’s Aldermere Farm Preserve. “Michael had just moved back up from Portland,” says Matt, “and we had thought about doing something together. I thought, oh, I wonder if Aldermere has something. I thought maybe we could learn some cool skills.”

Their timing was perfect. When they reached out, Joelle Albury, Aldermere Farm’s outreach and office manager, and general manager Heidi Baker were discussing launching a Farm Hands program for adults. The Heath brothers ended up participating in MCHT’s inaugural Big Farm Hands program. “It’s good to get some interactions with the animals,” says Matt. “It makes you think about where your food comes from and all the work that goes into it. Helping the cows, helping the farm, and hanging out—it’s been great.”

Farm Hands, Aldermere Farm’s first program, was started by former general manager Ron Howard back in 2001. Ron had learned invaluable lessons growing up on a farm, and he thought local kids would benefit from the experience of caring for the animals. He was right. A staple of programming at Aldermere Farm, Farm Hands has had about 360 participants over the years, typically ranging from age 10 to 13. 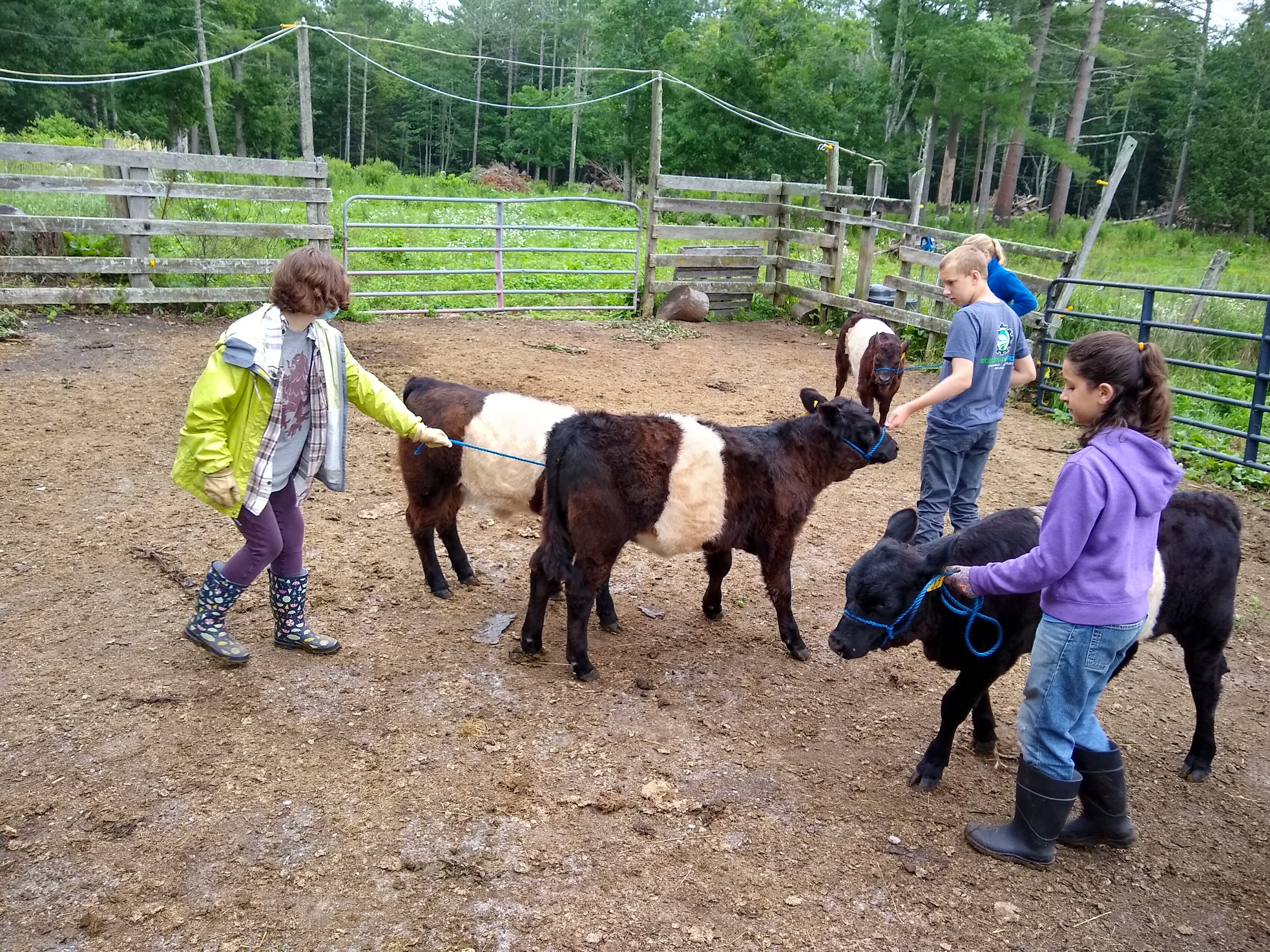 Participants with cows in the 2021 Farm Hands program.

Over the course of the program, which usually occurs in six sessions, participants learn skills like haltering a calf, brushing cows and leading them into the creep, and the basics of showing. Of course, the program cultivates more than just these farm skills. “We don’t grow and move forward until we’re uncomfortable,” says Heidi. “At first a lot of kids are not comfortable walking into the pens with the cows. A month later, they’re handling them with no fear.”

Heidi always begins the program by telling Farm Hand participants that they’re there to help as volunteers—that they have an important job to do. Heidi finds that they appreciate the sense of responsibility. And it’s true: as an educational center, it’s critical that these cows are halter trained and comfortable around people. The program was on hold during much of the pandemic and Heidi and her team acutely felt the absence of the Farm Hands.

The Farm Hands program geared to middle schoolers will continue to be an important part of programming at MCHT, but Heidi is excited to provide volunteer opportunities for adults like the Heath brothers as well.

“I would definitely recommend this program to people,” says Matt. “Same here,” says Michael. In fact, they liked it so much they continue to pitch in and help at the farm together once or twice a week!

Meanwhile, the next crop of young Farm Hands are back at it. Twenty years in, the program is going strong.