A Taste of the Open Sea

There’s a whole ‘nother world out there. Out there on the water, past the islands Metinic, Matinicus, and Monhegan and farther than the sunrise horizon. It’s the pelagic world of the Gulf of Maine and beyond, where sightings of land are less frequent than visuals of whales.

I recently joined Captain John Drury on board his boat Skua for a 12-hour voyage. We headed out from Vinalhaven Island for 11 Mile Ledge, an underwater topographical ledge system—essentially submerged mountain ridges—located south of Matinicus Island and Matinicus Rock. Ledge systems such as these create habitats very attractive for pelagic wildlife.

When you’re on a mission to see wildlife, it’s all about the food. “Upwelling” is (oversimplification forthcoming) a phenomenon that occurs when deep, cold, nutrient-rich waters riding underwater currents hit ledges (such as 11-Mile Ledge) and are redirected towards the surface.

The cold water rises, bringing the nutrients with it, and everything from plankton blooms to predators such as shearwaters, gannets, and whales. The waters above such ledges become feeding stations for wildlife as well as a destination for those humanoids hoping to observe pelagic wildlife—and we (the royal we) were not disappointed on this September day! 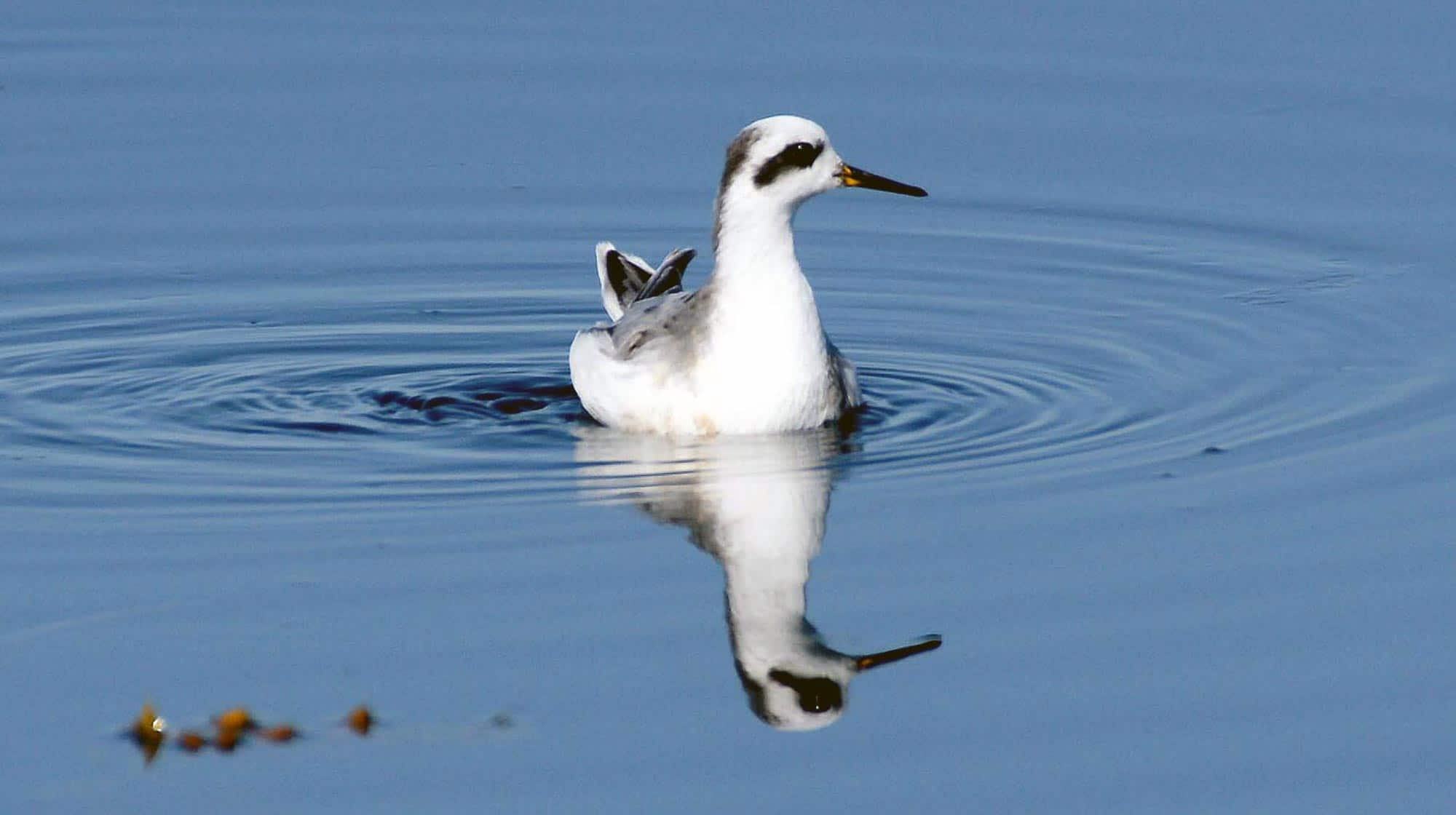 The seabird most observed (other than herring and great black-backed gulls) were two species of phalaropes, both the Red-necked (Phalaropus lobatus) and the Red (Phalaropus fulicarius). These are both Sandpipers (Family Scolopacidae) that breed in the northern reaches of North America. They take to the ocean once breeding season is done, overwintering at sea.

Phalaropes have partially lobed feet for swimming and dense plumage for warmth. They are also known for spinning in circles on the water (literally). Through the spinning, Phalaropes create their own currents (relatively insignificant though they may be) which brings food closer to the surface where they can get at. It’s always fun to see shorebirds floating in the middle of nowhere!

The Alcidae is a fun bird family that includes Atlantic Puffin, Black Guillemots, and Razorbills. These birds, called Alcids, “fly” underwater, flapping their wings in graceful pursuit of fish. In the air, Alcids flap like crazy in order to keep their rounded, hydrodynamic bodies alight.

Above the 11-Mile Ledge individual adult Puffins could be seen with fish in their bills, ready to feed their young. Young Puffins were also about – but not too close to the adults – and hungry for fish!

For another Alcid, Razorbills, the dad takes the lead in raising the youngster once it leaves the den. On this visit, we saw several father/youngster Razorbill pairs—who have been floating together for over a month—on the lookout for an opportunity to feed. 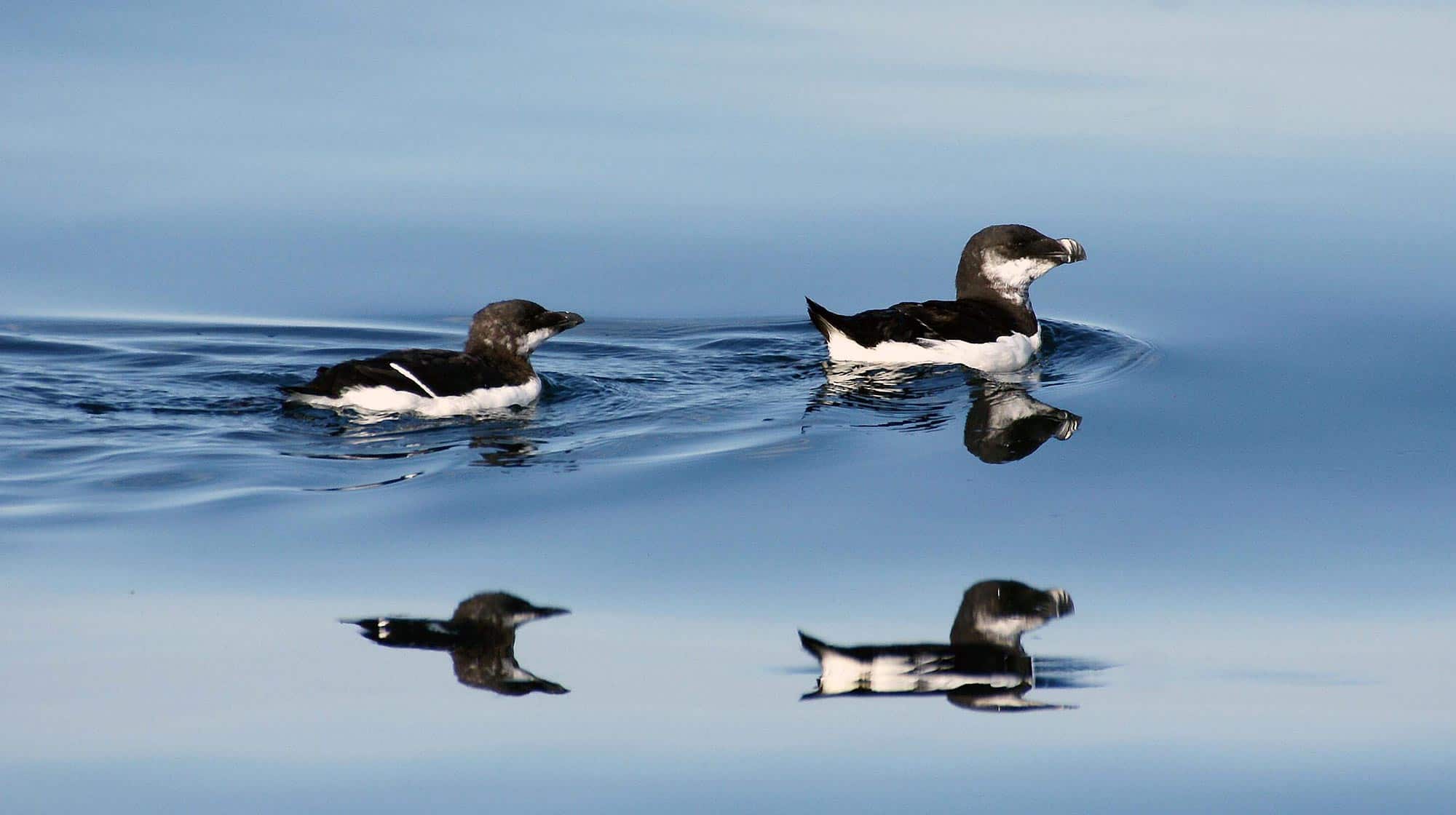 Members of the avian order Procellariiformes are (lovingly) referred to as “tubenoses,” in reference to the nostril tubes on top of their bills. The birds use the nostrils, called “naricorns,” to smell (an uncommon sense in the bird world) and to release salt after drinking ocean water.

That’s right, Procellariiformes drink salt water (ain’t no fresh water in the pelagic zone!) and, with the use of a salt gland just behind the bill, can extract the salt from the water and then release the salt through the naricorn. Salty boogers for sure, but a wonderful adaptation for the pelagic lifestyle.

On this day we “bagged” (not literally) four tubenoses: a trifecta of shearwaters—Sooty, Greater, and Cory’s—and many Wilson’s Storm Petrels. For a little more perspective, the Sooty and Greater Shearwaters, as well as the Wilson’s Storm Petrels, all breed on islands thousands of miles away off the southern tips of Africa and South America. They truly have come a long, long way to feed above the 11-Mile Ledge. 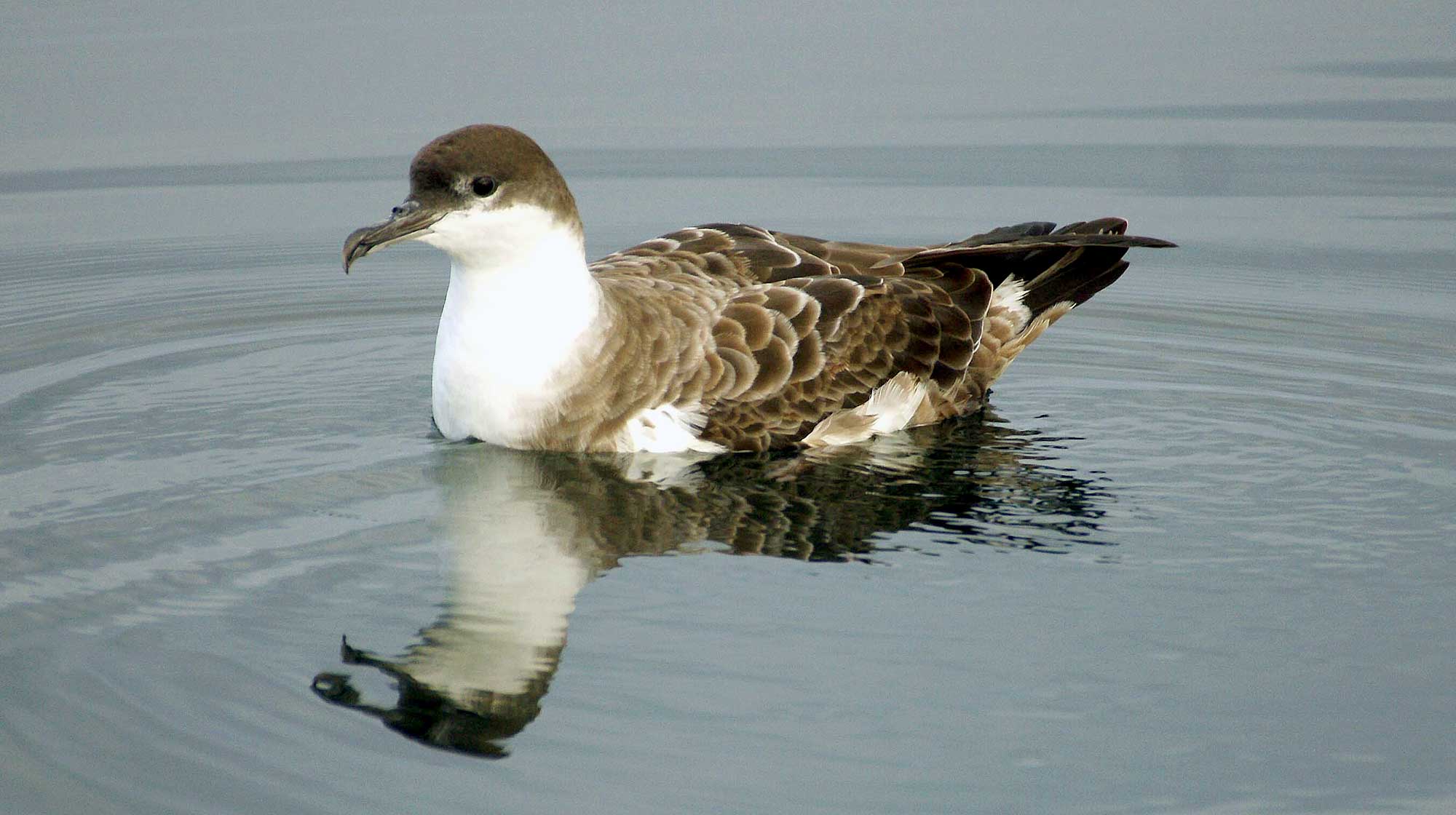 Plenty of Harbor Seals and Harbor Porpoise were to be seen, and we crossed paths with a Minke Whale on a mission as it steamed away to different waters. The marine mammal highlight, however, were the thirty or so Atlantic White-sided Dolphins (AWSD) we hooked up with towards the earlier part of the day.

Calm, clear seas made the session exceptional as both humans and dolphins b-lined towards each other upon first long distance sighting. The AWSD made pass after pass by the boat, so close and so often individual dolphins were familiarized with and could be identified by nicks and cuts on their dorsal fins.

There were several calves in the group, who seemed to spend as much time watching us as we spent freakin’ out about how awesome this experience was.

Those with boats or who work on boats are undoubtedly familiar with the pelagic zone, or at least have crossed paths with some of the players out there. You are the lucky ones, because I for one can never get enough of the pelagic lifestyle.

If you have a boat and ever need a spotter – let me know! And then we’ll see you out there!