In 2015, in East Machias, a “for sale” sign went up on a piece of land that had long been used as the local sliding hill.

To make sure kids could keep on using the hill, Maine Coast Heritage Trust purchased and protected a part of the property, made improvements (including putting in a park parking lot!), and eventually turned it over to the town to manage as a small local park.

Soon after purchasing the land, MCHT spoke with then 9th grader Violet Vigil. “I’d be really disappointed if they put a house there,” said Violet, who had been screaming down the hill for ten years. “There’s not so many things to do here in winter, and I have so many great memories of fun times. It’s cold! But that’s just part of the adventure.” 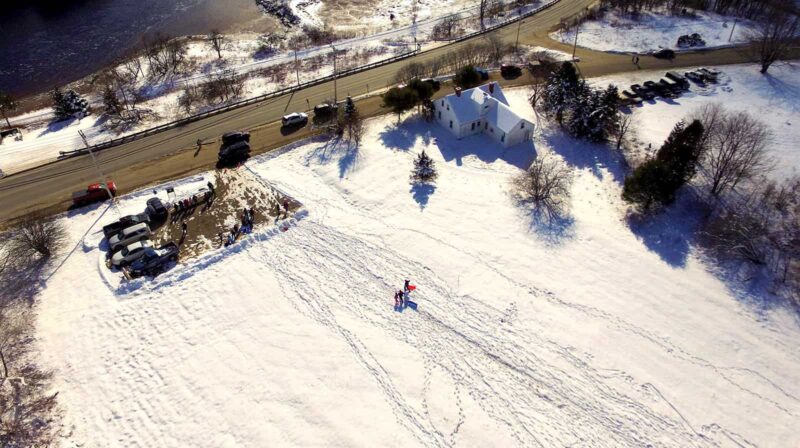 Photo courtesy of the Downeast Cowboy

MCHT’s field staff live and work in communities up and down the Maine coast, and pay attention to the places people care about—places that might not be protected, where access could be taken away.

“Boothbay Harbor lost its sledding hill,” says Downeast Project Manager Jacob van de Sande, “so we were concerned.” With spectacular views of the winding East Machias River, it was ripe for development. But in East Machias, MCHT was able to ensure the sliding hill’s protection.

“Sometimes the schools bus the kids in to sled,” says van de Sande, “and winter weekends it’s crawling. This is exactly the kind of small project where the community benefit is so clear, it’s a natural.”

To some it may be just a two-acre hill, but to MCHT and the town of East Machias, it is a place to make magic in the snow—every winter, from here on out.

MCHT is partnering with the newly formed Knox County Gleaners and other organizations to get healthy food in the hands of those who need it.

500 Acres Conserved in Rockport and Hope

Coastal Mountains Land Trust makes strides in the Round the Mountain conservation effort, with support from the Land for Maine’s Future program, Maine Coast Heritage Trust, and the Maine Water Company.

Small in acres, big in impact: a conservation project at Bailey’s Mistake in Lubec improves access for recreational and commercial use on the Bold Coast.

MCHT, the town of St. George, and Georges River Land Trust come together to protect special places in the midcoast for the public to enjoy.