Children look for monarch butterflies during a citizen science program to tag butterflies for Monarch Watch. Photo: Ashley Megquier.
Stories from the Coast >

If only Maine islands could talk, imagine the stories they’d have to share! Searsport’s Sears Island could regale us with tales of hardscrabble farming families, ancient campfires, and alcohol smuggled ashore during Prohibition. Or perhaps, even, the complicated story of the conservation of two-thirds of the island in 2009.

After a lengthy public stakeholder process, the state of Maine owns the island, Maine Coast Heritage Trust holds the easement ensuring the protection and public use of the 601-acre conservation area, and Friends of Sears Island is the Land Management Entity for the conserved land. 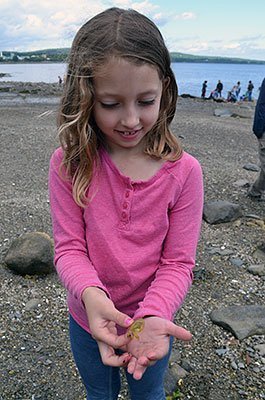 A child finds a crab on the beach during a family nature program on Sears Island. Photo: Ashley Megquier.

Lately, talk would be of the local kids who honed their winter survival skills in the woods and on the beaches in February, or the 100 people who came together on the island to celebrate the winter solstice last December, while music and the aroma of steaming hot chocolate filled the frigid air.

All this activity happening on Sears Island of late is thanks to Friends of Sears Island, the nonprofit that has done so much to make this place integral to community life in and around Searsport.

Last year the nearly all-volunteer group worked with a part-time outreach coordinator and touched over 450 people through robust, year-round programming. In addition, they steward the island, keeping it safe, clean, and enjoyable for the thousands who visit each year.

It was MCHT’s honor to help conserve most of this special island nearly a decade ago, and it is our joy to watch Friends of Sears Island bring it to life. It’s a good reminder: the story doesn’t end when a place is conserved, that’s just the beginning. Or, rather, the middle.