Maine Coast Heritage Trust, Royal River Conservation Trust, and the Freeport Conservation Trust announced that they have secured the funds needed to protect one of Maine’s most prominent marsh migration projects.

(January 19, 2022 – Topsham, Maine) – Maine Coast Heritage Trust (MCHT) announced today that a multiyear, multimillion dollar collaborative effort to protect the Cousins River Fields & Marsh has been successfully realized. Since 2019, MCHT has been working alongside the Royal River Conservation Trust and the Freeport Conservation Trust to secure the $2.19 million needed to purchase and protect an 82-acre property in Yarmouth and to raise awareness of the importance of healthy marshes in the face of climate change. The secured funds will be used to finalize purchase of the Yarmouth property later this year. In 2020, the Freeport Conservation Trust secured 13-acres of adjacent conservation land in Freeport, as a first phase of the joint project. 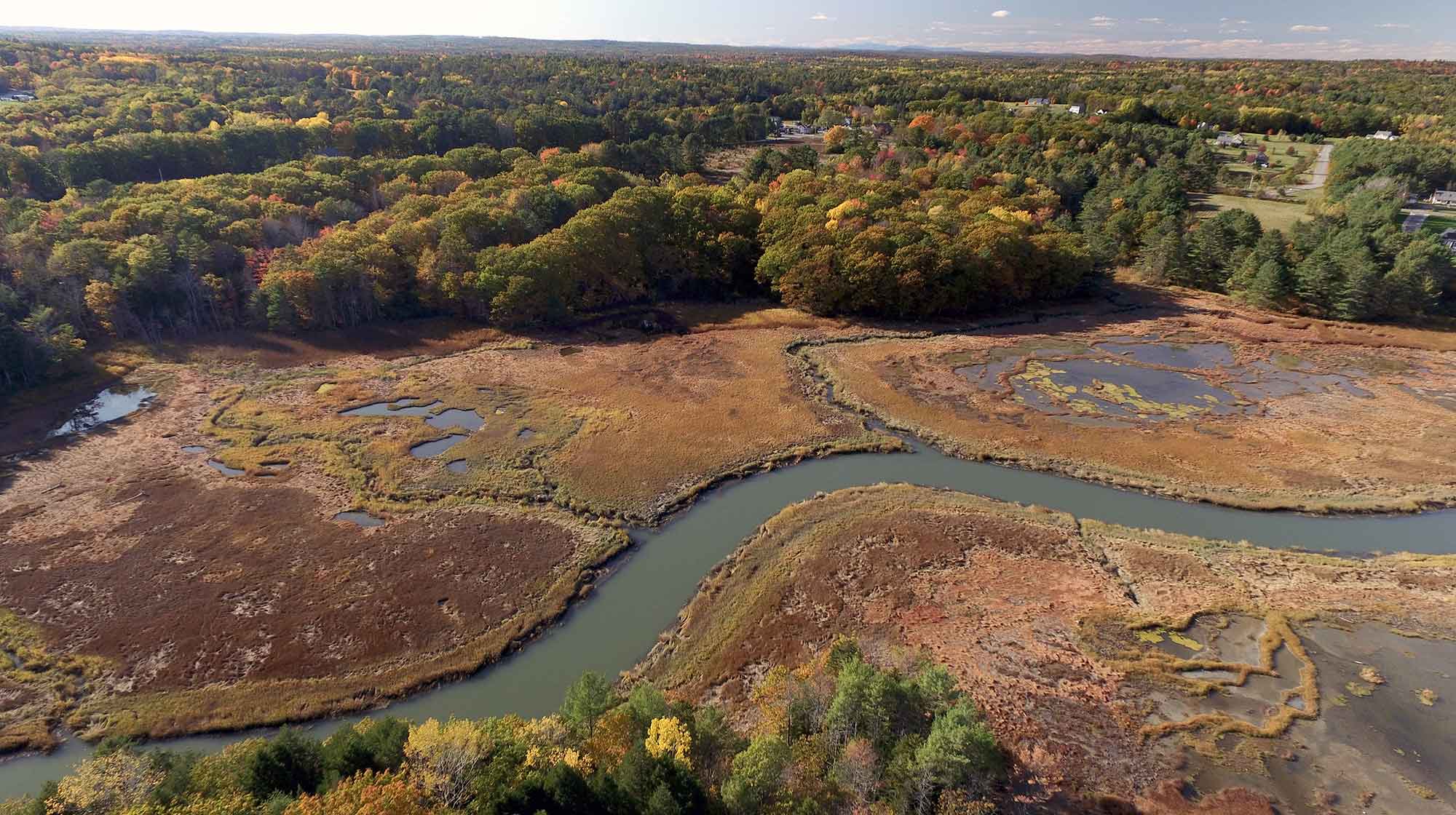 Considered one of Maine’s most prominent active marsh protection projects, and a keystone parcel in a larger coastwide marsh initiative, the Cousins River Fields & Marsh is comprised of a tidal wetland and 25-acre field, located off 1295 in Yarmouth, just north of Exit 17. The highly visible marsh is seen by millions each year as they travel up and down the well-travelled interstate corridor and provides a range of ecological and flood protection benefits to the towns of Yarmouth and Freeport.

“Marshes have long been overlooked or underappreciated, but today they have emerged as one of the most threatened yet important resources in our response to climate change,” said Amanda Devine, MCHT Southern Maine Regional Stewardship Manager.  “First and foremost, marshes provide critical habitat for rare plants, migratory birds and wildlife; they are nurseries for juvenile fish and shellfish; but they also provide buffers for storm surge and sea level rise and are incredibly good at absorbing heat and sequestering carbon.”

Yet scientists are sounding the alarm that salt marshes and tidal wetlands are disappearing due to rising sea levels. Large marshes, such as the Cousins River Marsh, with undeveloped upland buffers, are more resilient and therefore highly valued for protection. Thanks to years of work and extensive conservation by Royal River Conservation Trust and Freeport Conservation Trust, this 82-acre parcel creates a 220-acre conserved marsh system.

Big Win for the Towns of Yarmouth & Freeport

For the towns of Freeport and Yarmouth, The Cousins River Fields & Marsh Project represents a highly visible and critically important conservation win. “Yarmouth’s fiscal commitment to the Cousins River Marsh project recognizes both the threat to the marsh from rising sea levels and its role in mitigating the effects of climate change,” said Yarmouth Town Councilor Dave Craig. 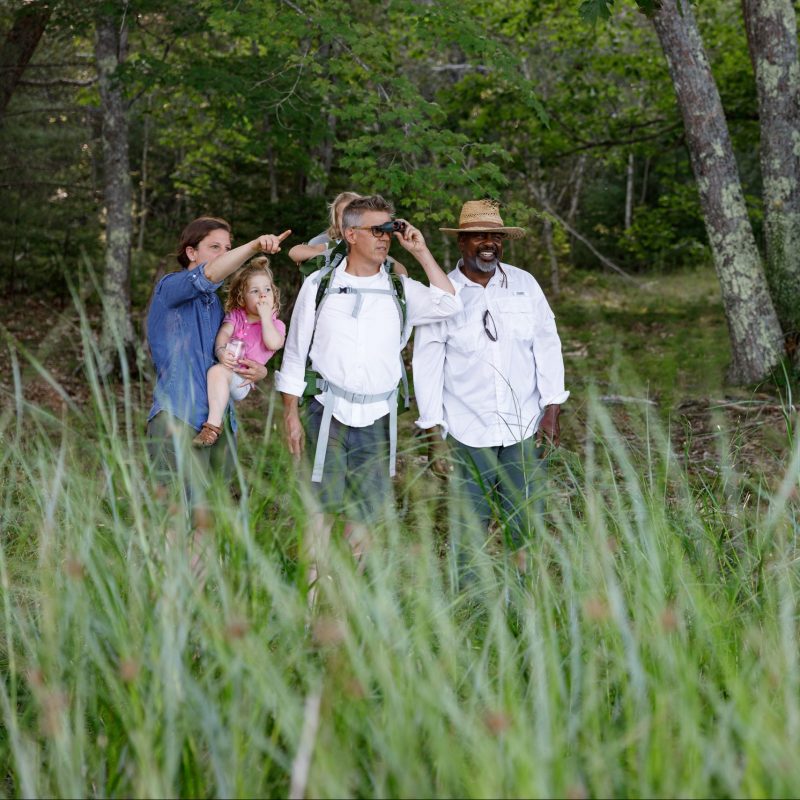 “Protecting this marsh and preserving its carbon sequestration capacity is vital as the Town of Yarmouth considers a climate emergency resolution.”

“As one of the largest undeveloped parcels in Yarmouth, both Royal River Conservation Trust and the Town of Yarmouth prioritized conservation of this parcel in recently adopted plans. Maine Coast Heritage Trust stepped up to the plate with the leadership necessary to get this project across the finish line with robust and welcome support from the community,” said Royal River Conservation Trust Executive Director Alan Stearns.

Maine Coast Heritage Trust has served as coordinator for the project, leading its fundraising efforts, organizing a volunteer committee, holding events, and working across multiple channels to increase awareness.

“Because they act as sponges to absorb rising seas and as natural filters to keep waters clean, Maine’s marshes are frontline defenders against the ravages of climate change,” said Devine.  “This particular marsh is teeming with wildlife, close to Portland, and will be a great site for research and education about the essential role marshes play in the face of climate change.”

MCHT will finalize purchase of the property later this year once all the funding has been received. In the meantime, a planning process has begun to ensure that the critical habitat is protected. “We look forward to opening the preserve to the public once we acquire the property,” said Devine.

MCHT worked up until December 31, 2021, to reach the $2.19 million fundraising goal. In December, they received word that a $466,365 grant from the U.S. Fish and Wildlife Service’s National Coastal Wetlands Conservation Grant Program would help pay for the project.  The Maine Department of Inland Fisheries & Wildlife partnered with MCHT to secure the grant. The campaign also received a significant boost from an anonymous donor, Ducks Unlimited and a dollar-for-dollar matching gift from a local community supporter. Local brewery Liquid Riot and other vendors helped organize a successful “Meet the Marsh” November event which welcomed more than 400 attendees to the property for educational tours and community building.

MCHT is actively working to identify, preserve, and restore the priority marshes along Maine’s 3,478-mile coastline. In 2018, the organization identified 67 tidal marsh complexes where land protection has the greatest potential to support marsh migration as a strategy to enhance coastal resilience. Cousins River Fields & Marsh is one of those places. Since then, MCHT has worked coastwide to engage landowners, generate a pipeline of active projects, and secure conservation solutions for at-risk, highly resilient sites. Along with a host of other conservation partners, the nonprofit has conserved approximately 60% of the identified priority areas for marsh protection.

MCHT is a dynamic, multifaceted organization with initiatives ranging from preserving coastal access for communities to high impact ecological work focused on reconnecting waterways and improving coastal resiliency to climate change. A leader in Maine’s nationally renowned land conservation efforts since 1970, MCHT maintains a staff of more than 60 full-time and seasonal employees with an annual operating budget of $8.7 million. It also manages a growing network of almost 150 coastal and island preserves free and open to everyone and leads the 80-member Maine Land Trust Network to ensure that land conservation provides benefits to all Maine communities. Get involved at www.mcht.org.

RRCT is a non-profit community-led land trust.  RRCT envisions ecologically health lands and waters that support recreational and commercial activities for all of us, forever.  We conserve land in the communities that comprise the Royal River watershed, working primarily in Yarmouth, North Yarmouth, Pownal, New Gloucester, Gray, Durham, and Auburn.  Get involved at www.RRCT.org.

Freeport Conservation Trust is a local land trust dedicated to sharing Freeport’s special natural places, valued for recreation, wildlife habitat, clean water, farming, forestry and scenic beauty. Since 1977, our volunteers and staff have partnered with landowners, neighbors, local businesses, the Town of Freeport, and other groups to conserve and connect more than 1,800 acres of open space and nearly 20 miles of public trails. From ridgelines to ravines and islands to woodlands, together, we’re preserving the places you love.