Featuring nearly six miles of lakeshore and 3,057 acres in Whiting, this wildlife-rich preserve is a haven for outdoor enthusiasts throughout the year.

Rocky Lake is good for:

Road Access: From Route 1 between East Machias and Whiting, turn north on Dodge Road and drive 0.6 mile. After crossing a small bridge over the Orange River, pass Kamway Drive, and then turn left onto the next gravel road, Camp 7 Road—this is the preserve’s entrance. There are multiple parking areas. The first is located on the left in 0.8 mile and will be the trailhead for Orange Lake hiking trails (in development). Drive another mile to reach a kiosk at an intersection of roads—limited parking and preserve information is available here. Continue driving north along the main road for almost 2 more miles, then turn left. Proceed a little more than half mile to a parking area near a hand-carry boat launch and picnic area on Deep Cove.

Water Access: From Route 1, turn onto Halls Mills Road and follow it 1.5 miles. On the left is a small dirt road that leads to the Maine Department of Inland Fisheries and Wildlife’s Rocky Lake public access boat launch site and parking lot. From the lake, paddlers and small motor-boats can access the preserve at Deep Cove Point and reach the preserve’s two campsites on Rocky Lake. For more information about how to access the Orange Lake campsite, read below. 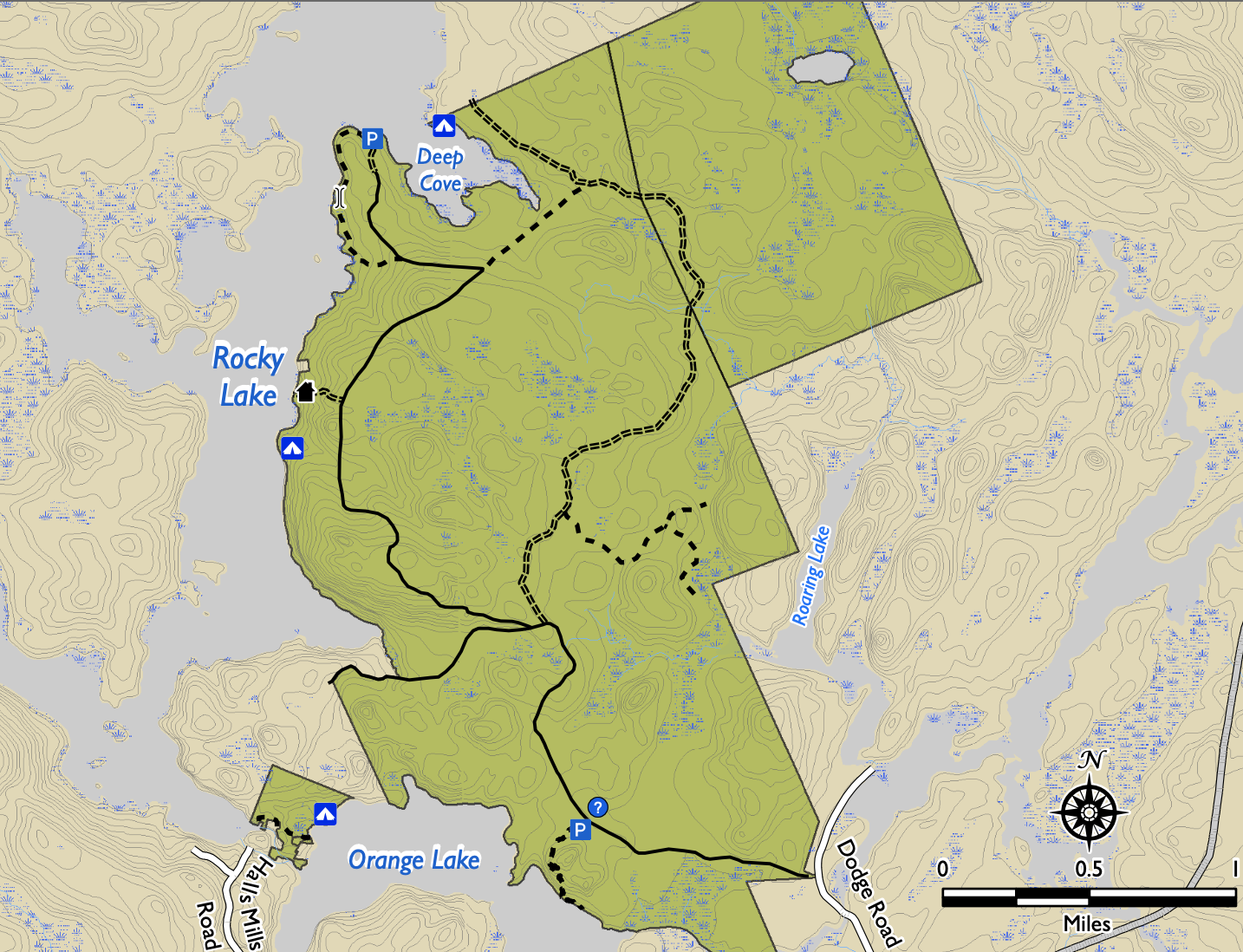 All sites are accessible by water only. There are two sites on Rocky and one on Orange Lake, with a portage between the two lakes.

Keep in mind, Rocky Lake got its name for a reason. This lake has very few open spots, so boats should be hauled onto shore for the night. You will also find a small primitive pit privy at each of these campsites. They are shallow, designed to be in the aerobic layer of the soil.

At all sites, please carry out or burn toilet paper to help preserve the longevity of the pits. And, remember to leave your comments in the logbook attached to the picnic table!

Deep Cove Campsite: Just to the east of the hand-carry boat access at Deep Cove Point is a quick paddle—less than 1000 feet from the preserve’s hand-carry site. You will find a fire ring and picnic table overlooking the secluded cove. Look and listen for loons, ducks, and beaver in the marsh. This campsite is available by reservation only.

Two Step Campsite: Accessible only by water, this campsite can be accessed from the IFW (Maine Department of Inland Fisheries & Wildlife) boat launch at the end of Halls Mills Road (approximately 1.75 miles) or from the Deep Cove hand-carry site (1.3 miles). It features two levels where tents can be set up, and has a fire ring on the rocks, a picnic table, and boasts fabulous sunsets over Rocky Lake. This campsite is available by reservation only.

Orange Lake Campsite: There are two primary ways to get this campsite, which is only accessible by water. The more direct option is to use the public boat launch at Pidgeon Point Road (off Halls Mills Road in Whiting). More adventurous paddlers can begin from numerous points on the Orange River or from the two access points on Rocky Lake via the MCHT Portage between Rocky and Orange lakes. Of the three campsites on the preserve, this one is best suited for larger groups. The site is set back from the lake on a naturally flat opening shaded by large white pines, with a slightly larger fire-ring and privy. The landing site is found behind a small island at the western end of the lake.

Until 2003, the preserve was managed as commercial timberland, and much of the upland forest is relatively homogenous, early-successional spruce-fir-hardwood forest which has been cut heavily in the past several decades. A narrow band of forest along the shorelines of Rocky and Orange lakes feature more mature spruce-fir forest. Set amidst the backdrop of upland forest and the lakeshore are several different types of wetland communities, including forested, shrub-scrub, and emergent wetlands. A few intermittent streams cross the property; these run seasonally into the lakes.

MCHT owns and manages a cabin on this preserve. Please respect the privacy of those staying in the cabin, and keep your distance. For more information about the cabin and anything else regarding the preserve, please contact .

The Rocky Lake Preserve has a long history of active forest management, dating back to the 1830s and 40s. In the twentieth century, a series of paper companies owned the land and harvested wood for their mills. More recently, short term investors owned the property and cut the forest more aggressively. MCHT is evaluating how to manage Rocky Lake’s forest in the future. At the time of the acquisition, most of the preserve’s trees were very young. It will take time to return the property to a healthier mix of age classes.

This place belongs to all of us. Thanks for helping us take care of it.