This 1,225-acre preserve in Lubec provides people of all ages opportunities to experience a rugged coastal landscape of cobble beaches, sheer cliffs, and rocky promontories.

Hamilton Cove is great for:

From Lubec: Take the South Lubec Road toward Quoddy Head State Park and bear right when the road forks. Travel 2.4 miles to a small parking area on your left. 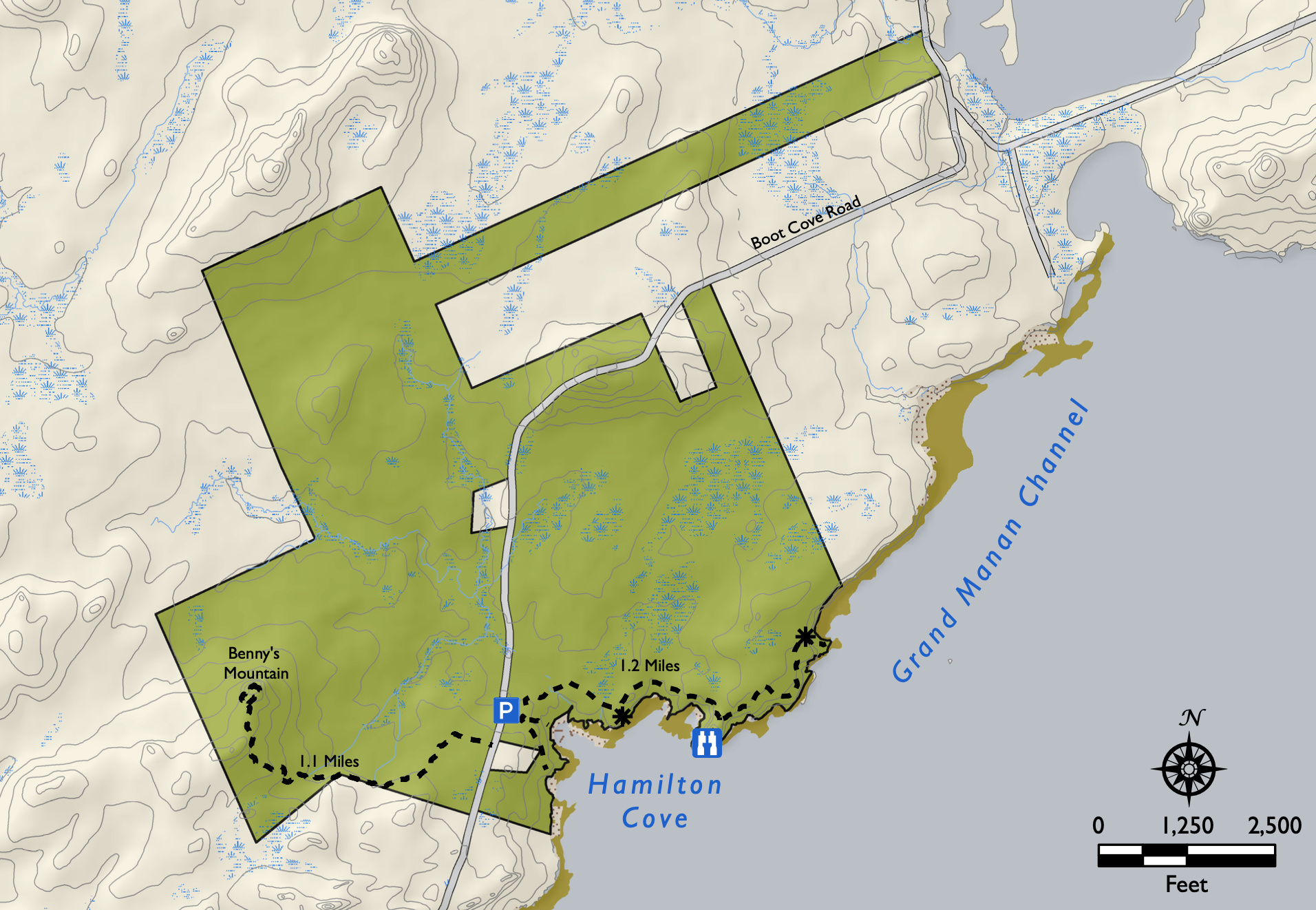 Pick a trail or do them all

From the parking area, head down the main path a hundred feet to a kiosk and four-way intersection. Choose your destination:

Coastal Trail. The most popular and scenic choice is the Coastal Trail. It departs left into a grove of tall trees. After crossing Hamilton Stream, the route bears right and joins a wide, grassy path with views of the cove. As the trail swings left, pass a short spur right that leads to a bench and scenic view. The main route swings around a cove and then rises gently to an intersection. To the right, a second spur leads to a platform with panoramic views of Grand Manan Island and the Bold Coast. The Coastal Trail continues left and follows a slightly rougher route. Hike through the boreal forest to the trail’s end, a bench with views of Quoddy Head. The roundtrip hike to the platform is about 2 miles and to the bench is about 3 miles.

Beach Trail. Hamilton Cove’s shortest trail leads straight from the preserve’s kiosk. Through an open meadow, the path drops quickly to a cobble beach. Watch your step as you walk down the rock staircase. This quiet cove offers pleasant views and is an ideal spot for a picnic lunch. The roundtrip hike to the beach is 0.1 mile.

Meadow Trail. The Meadow Trail bears right. (Stay left, as the Benny’s Mountain trail departs right.) Up a small rise, the path soon emerges into an open meadow. Enjoy the views as you make your way down to the water’s edge. The roundtrip hike to the end of the Meadow Trail is 0.4 mile.

Benny’s Mountain Trail. This is the preserve’s only inland trail. From the kiosk, turn right. Cross Boot Head Road and pick up the trail on the other side, which first leads through open field, then a taller, shadier forest boasting some old-growth trees. Continue across the rocky terrain to the start of a short loop. Complete the circuit in either direction. The trail quickly rises to a small mountain summit with views of Lubec and the surrounding area. The roundtrip hike to Benny’s Mountain is 2.4 miles.

More than 25 different types of plant communities thrive on this preserve, including an unusually high number of bogs, fens, and other wetlands that provide habitat for several uncommon plants including baked-apple berry, Labrador tea, roseroot sedum and beachhead iris.

The extensive alder community found here is unique to coastal Maine and Alaska. There are also grassland barrens, the product of land clearing in the mid-1800s and kept open by frequent fires. In areas with less history of fire, maritime spruce forests thrive. In wooded areas, the mountain ash provides essential fruit for migrating birds such as hermit thrush, robins and catbirds, as well as resident mammals. Beavers have been a strong influence on the water regime of Hamilton Brook, changing water levels from year to year. The inland upland supports huge old yellow birch, red spruce and cedar trees.

Extensive rocky barrens are popular nesting sites for bird species like Lincoln’s sparrow and palm warbler while meadow areas near the brook attract ducks, bitterns, woodcock, and flycatchers. In spring and fall, hawks routinely pass by on their migratory routes and throughout the summer northern harriers and merlins breed in the area. The preserve also supports black bear, moose, fox, coyote, snowshoe hare, bobcat and other mammals. Whales and harbor seals can be seen offshore.

Hamilton Cove enjoys a long history of human activity. The original land grants date back to the early 1800s. A portion of an existing trail follows an old dam that was built to support a local mill. Several ships were built on the property in a shipyard located near the mouth of Hamilton Stream.

Catherine Congdon of Keene, New Hampshire, was the holder of one of the original land grants, from Jim’s Head to just east of Wallace Cove in the early 1800s. Ownership passed from Ms. Congdon to Benjamin Hamilton who had a house near Hamilton Brook. In winter or early spring, the remains of a foundation can still be found near the registration box. The present path from the main trail to the brook follows the old dam, which was built to retain water for a mill. A line of willow trees marks the dam’s location. They continue on both sides of the brook. The mill cut the lumber used to build several ships in a shipyard which was located where the stream meets the sea. Benny’s Mountain is named after Benjamin Hamilton.

How Hamilton Cove became open to the public

MCHT acquired the first of four parcels that now comprise the preserve in 1993. The family that sold part of their property, below appraised value, to MCHT in 1998, donated an additional 435 acres in 2008. A second family sold 414 acres to MCHT in 2007 and this section of the preserve is dedicated to Philip and Beatrice Shapero.